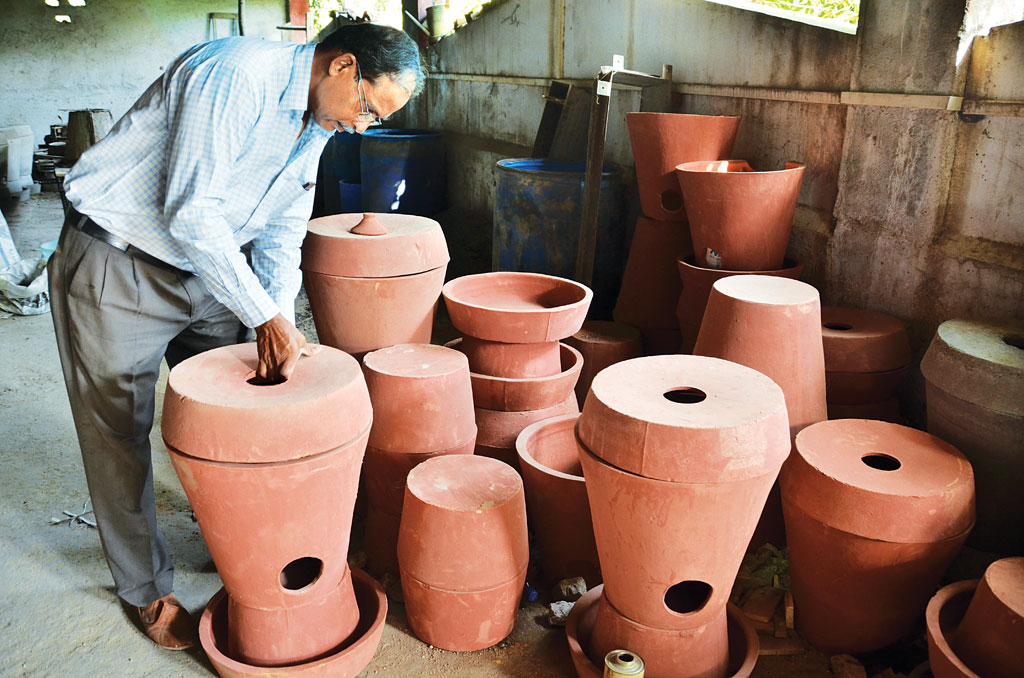 In 2010, the 54-year-old decided to train women in the rural areas and low-income groups in the cities to set up and manage sanitary napkin manufacturing units after he learnt about the issue from his wife Swati, who runs Vatsalya Foundation, a non-profit. Today he has 20 sanitary manufacturing units in Vadodara district and each unit employs eight to 10 women. Bedekar’s team only ensures financing and marketing of the napkins.

“The units had multiple benefits. First, rural women turned entrepreneurs, who further provided employment to other women. This encouraged all the women in their families to start using the napkins,” Bedekar told Down To Earth. The other feature about the initiative is that the machines used to manufacture the napkins are made by Bedekar’s company Smart Enterprise, which has two units in Vadodara. “It costs just Rs 2.5 lakh to start the units with semi-automated machines because we don’t go out to buy these machines,” he says. The napkins are made of cotton and polypropelene through a technology that is used by most popular brands. “The napkins are of the same quality and durability,” he says. They cost Rs 2.50 a piece, which is more economical than the napkins made by popular brands that range between Rs 3 and Rs 15 a napkin. A 2014 study carried out by AC Nielsen and reviewed by NGO Plan India says 81 per cent rural women use unsterilised cloth since they are cheaper and 68 per cent said they could not afford to buy sanitary napkins. The study says just 12 per cent of the 365 million menstruating women use sanitary napkins in the country despite the fact that the use of alternative sanitary care measures—unsterilised cloth, sand and ash—make them susceptible to infections and diseases such as cervical cancer. The women working in these units are paid 50 paise per napkin and they on an average earn Rs 3,000 a month. 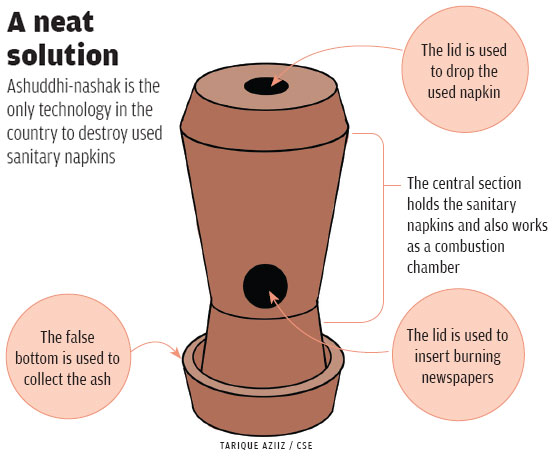 Soon after the success of the units, Bedekar and his team faced a new challenge—how to hygienically dispose of the used napkin. “With these units, more women in the region started using sanitary napkins but they struggled to dispose of the used napkins because there was no garbage collection and management system in the rural areas,” he says. The problem became so grave that “many women might have stopped using sanitary napkins”.

The innovator in him decided to develop an incinerator to destroy the used napkins. “No technology exists in the country to specifically destroy used sanitary napkins,” he says. “The incinerator had to be affordable and acceptable in the rural environs. So the first prototype incinerator, Ashuddhi-nashak, was made in terracotta. Then I redesigned it in such a way that the burning was initiated by used or waste paper and not electricity. This would keep the running cost negligible,” says Bedekar. He adds that unlike burning in the open, the process happens in an enclosed chamber. As a result, there is “very little” smoke generated from the units “and the heating lasts for just a minute or two at 290oC, which is much below the permissible limit of over 470oC”. The resultant ash gets easily dissolved in the soil since the napkins are made of cotton and polypropelene.

“It has a reasonable working height, a central section which holds the sanitary napkins disposed in it and also works as a combustion chamber. The chamber is provided with a false bottom—a steel-netted floor that facilitates combustion by allowing enough fresh air to sustain the burning and then the ash gets cleared through the false bottom, emptying the unit automatically,” Bedekar explains. “We have also introduced the same product in reinforced concrete, which is strong enough to withstand transportation by road or rail,” he says.

Bedekar says the Ashuddhi-nashak is in great demand and they have already installed 2,000 units of the incinerator, which cost Rs 2,000 a piece. “We make a profit of 15 to 17 per cent per piece,” he says.

“It has been installed in many schools under Sarva Shiksha Abhiyan. There have been several individual orders as well for the incinerator,” he says. The inquiries increased after the product was exhibited at the festival of innovations held at the Rashtrapati Bhawan in March this year.

“We have installed this incinerator in eight to 10 high schools and it has been of great help. We plan to order more incinerators for the university,” says Harish Joshi, who heads the Centre for Social Entrepreneurship at Manipal University in Karnataka. Joshi adds that they are using coconut pulp and wood pieces instead of paper for burning.

Even Darshana Suthar, gender officer at the Sarva Shiksha Abhiyan cell in Gandhinagar, got the incinerator installed at her office. “We have installed these incinerators at the 109 girls’ residential schools in Gujarat and we are quite satisfied with its performance,” she says. Suthar adds that earlier the hostel toilets would choke because the students would flush the napkins.

About his future plans, Bedekar says, “I wish to popularise Ashuddhi-nashak.”