There is no scientific consensus on the cause of encephalitis that has been claiming lives every year in the Gorakhpur region since 1978. But an unprepared government along with medical mismanagement made matters worse this year 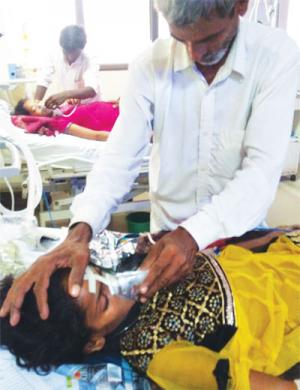 More than 9,950 children have died of encephalitis in a single hospital in Gorakhpur in the past 40 years. But the health system continues to be unprepared to deal with the disease. On August 10 this year, a news portal ran a story about shortage of liquid oxygen in the Baba Raghav Das Medical College (BRD), and warned of an impending crisis. Since January, the disease had already claimed 160 lives. But oxygen was not made available and that night 23 children died. Children continued to die, and by August 21, the death toll rose to 260 for the year. Though it was clear that the children died due to lack of oxygen in brd on August 10-11, the state government denied underpreparedness, even as it suspended the principal of the college and vowed to take action against the supplier.

So was the hospital management aware about the shortage? The journalist who wrote the story, Manoj Kumar Singh, says everyone was aware about the looming crisis and the government is now just passing the buck. It seems Rajiv Mishra, the principal of brd, reminded the authorities in several letters about sanctioning the pending payment to the supplier. According to media reports, Mishra wrote the first letter on March 22 to senior officials in the state’s health ministry. On August 1, Mishra copied this letter to the Medical Education Minister Ashutosh Tandon. Reports also suggest that the supplier too had informed the college and higher authorities that unless his dues of R68.65 lakh were cleared, the company would stop delivery. 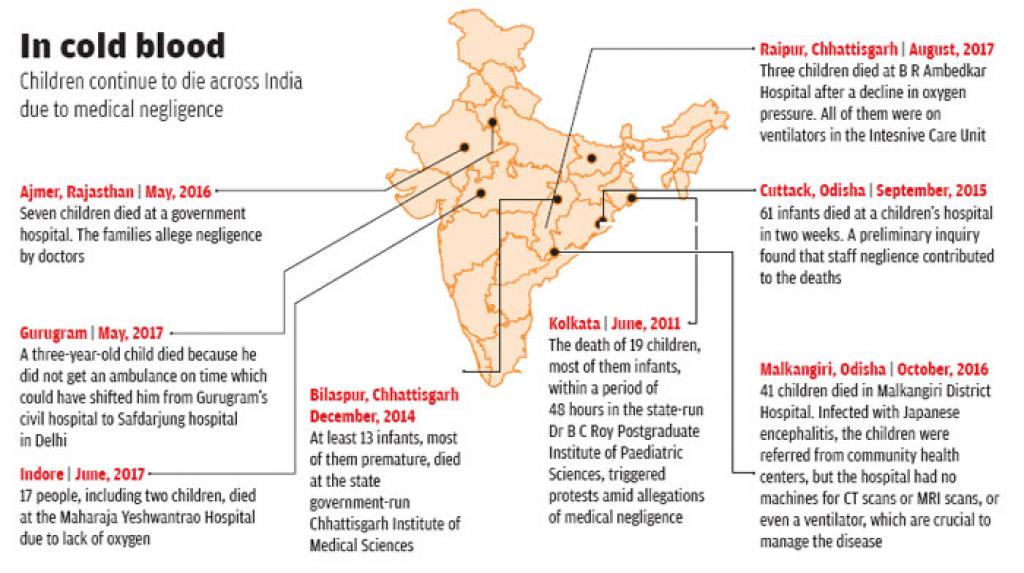 This is not the only case of mismanagement in government hospitals across the country as far as shortage of oxygen supply is concerned. According to Amulya Nidhi, an Indore-based activist, in July, 17 people, including two children, died at the Maharaja Yeshwantrao Hospital in Indore due to lack of oxygen supply. The Madhya Pradesh government has constituted a “committee” to investigate the matter (see ‘In cold blood’).

K P Kushwaha, who was the former head of the paediatrics department at the brd Medical College, says corruption is the biggest reason for these deaths. From sanctioning to transferring money, a share of the money has to be given to government authorities, he says. Amit Sengupta, a Delhi-based public health expert, says it is evident that the Uttar Pradesh government did not sanction the payment despite rep-eated reminders. It is likely that this was a result of corrupt practices, and thus, needs to be investigated.

The Gorakhpur tragedy is an example of the deplorable state of India’s public health system. BRD caters to patients from 15 districts of eastern Uttar Pradesh and also from a few districts in Bihar. Patients from Nepal too come here for treatment. At any given point in time, the paediatric department is treating 300 children, but there are only 210 beds.

Srinath Reddy, president, Public Health Foundation of India, a policy think tank, says that to ensure accountability, India needs to enforce standard management guidelines for doctors, nurses and hospital staff for effective treatment methods as well as to procure equipments. Yet most states have not even adopted the Clinical Establishment Act, 2010, which prescribes a minimum standard of services and facilities for clinical establishments, he says.

Experts say there is a need to decentralise the public health management system to ensure accountability. At present, the inefficiency is partly due to the lengthy bureaucratic processes.

Reddy says to ensure accountability, the Right to Health is essential. India’s National Health Policy, 2017, however, says that the country cannot yet include this in the Constitution. Sengupta says that in many countries such as Brazil and South Africa, the Right to Health is part of their Constitutions, which means that the government can be held responsible in cases of laxity and negligence. Worse, loopholes in India’s healthcare system allow the accused to easily evade the law, adds Sengupta.

Grappling with the mystery

Acute Encephalitis Syndrome (aes) has been hounding children in Uttar Pradesh’s Gorakhpur region for many decades. Most cases and deaths are reported in August and September each year. The lack of oxygen in brd hospital may have made the headlines this August, but the fact remains that the scientific establishment in India is yet to decipher the cause of these deaths. 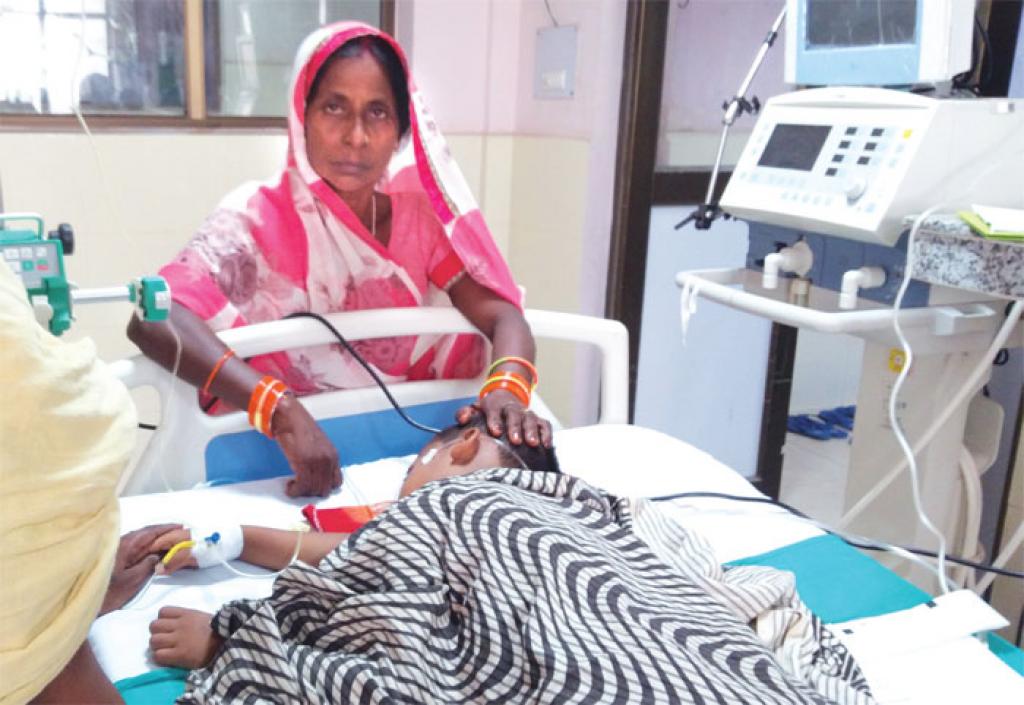 A review of research to identify the cause of the disease says that most studies between 1975 and 1999 identified Japanese Encephalitis Virus (JEV) as the main cause of encephalitis across the country. However, studies published after 2000 point to a shift to Chandipura virus and entero-viruses, says the study published in the National Medical Journal of India in 2012. So the mystery of encephalitis remains unresolved. In fact, researchers say the cause of the disease in as many as 59 per cent of patients between 2013 and 2014 in Gorakhpur remains unknown.

This year, the mystery deepened when researchers came up with another causal agent. It was linked to Orientia tsutsuga-mushi, a bacterium which causes a disease known as scrub typhus. The disease was on the decline in Asia for many decades, but now it seems to have re-emerged. “Gorakhpur and Assam have reported the maximum number of scrub typhus cases leading to aes in the country,” says Siraj A Khan of the Regional Medical Research Centre, Northeast Region, Indian Council of Medical Research (icmr), Dibrugarh, Assam. The most common symptoms of scrub typhus include fever, headache, body ache, and sometimes rashes. Recent studies suggest that it can cause aes too.

When 46 children admitted to brd between August 17 and October 16, 2016 were tested for scrub typhus, immuno-globulin M—the first antibody to appear in response to an antigen—was detected in 63 per cent of cases. Similarly, immuno-globulin G—which is the most common type of antibody in blood—was found in 82.6 per cent of cases. This indicates that these children were suffering from this disease. This study was published in Emerging Infectious Diseases in August this year. Apart from India, scrub typhus cases have been also re-emerged in South Korea, China, Micronesia and Maldives. The disease has now spread to new countries such as Cameroon, United Arab Emirates and Chile.

Scrub typhus is present in areas with scrub vegetation which grows where mature forests have been cut down. Rodents and humans are incidental hosts to the mite, which is both a reservoir and the vector for the bacteria. Its re-emergence and spread to newer areas sug-gest that rodents bearing infected mites may be expanding their range due to climate change, argues David M Walker in an article published in the New England Journal of Medicine in September 2016. Walker is the director of the Center for Biodefense and Emerging Infectious Diseases, the University of Texas Medical Branch.

A September 2012 study published in Ecological Applications shows that the pressures of global trade too increases the risk of disease incidence due to changing land use. For example, after Taiwan joined the World Trade Organization in 2001, rice cultivation fell from 80 to 55 per cent. This led to an exponential increase in the number of ticks and chiggers in abandoned rice fields. Flooded paddies are poor habitats for the mites. The authors say that this study shows that apart from climate change, global travel and habitat destruction; economic policies can also affect human health by influencing and changing the landscape.

However, some experts are not con-vinced that all the cases in Gorakhpur were due to the scrub typhus. “It seems to be a mix of illnesses and the major cause of the outbreak still remains elusive,” says George M Varghese, professor, Department of Infectious Diseases, Christian Medical College, Vellore, Tamil Nadu. The symptoms reported from Gorakhpur are atypical to scrub typhus. Most of the patients were infants, but they are unlikely to have any exposure to vegetation, which is the mode of acquisition of scrub typhus, he adds.

The uncertainty in the causal organism is one of the reasons for the high number of deaths. In Assam, which is recognised as an endemic zone for aes caused by the JE virus, scrub typhus is usually not suspected. Though scrub typhus is treatable, death rates are as high as 49 per cent, says a study published in Emerging Infectious Diseases in January 2017.

The re-emergence may also be due to changes in the antibiotics used to treat fevers. Earlier, fever patients would be ro-utinely prescribed antibiotics such as tetra-cycline and chloramphenicol, which effec-tively treat scrub typhus. But now the commonly-used antibiotics are cephalos-porins, which are ineffective against this disease, says Varghese. Nevertheless, it is clear that scrub typhus is back. Earlier, community samples in India showed around 5 per cent serological prevalence of past infections, but now the prevalence rates are as high as 30 per cent, says Varghese. 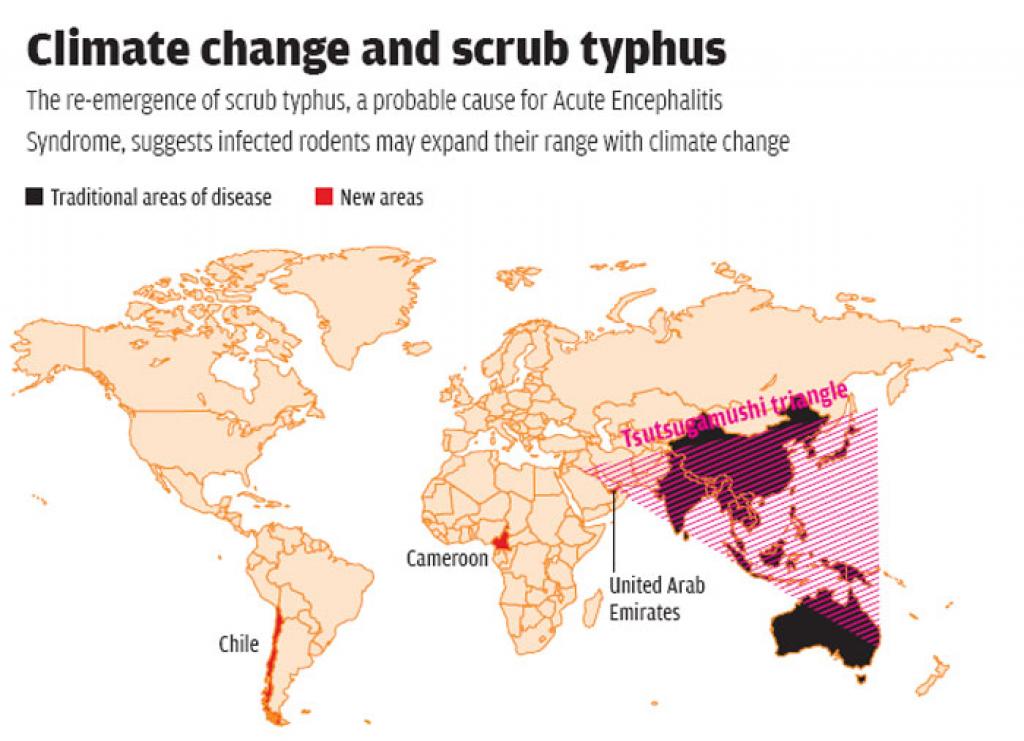 The world is facing a re-emergence of scrub typhus and it is crucial that doctors are made aware to ensure early diagnosis and proper treatment, says Varghese. In 2015, ICMR developed guidelines for diagnosis and management of such diseases. Early diagnosis and prescribing the drug, doxycycline, which costs less than R200, can easily save a patient. India is also part of an ongoing trial in high burden countries to evaluate the best treatment for severe scrub typhus,” reveals Varghese.

While researchers like Varghese are working to improve and develop treatment and diagnostics, the need of the hour is to quickly solve the mystery around the disease to help patients.

Walker points out that researchers seldom work on rickettsial diseases, which includes scrub typhus due to difficulties in carrying out research, even though it is often as prevalent as malaria and dengue. “This neglect has led to spotty and incom-plete data that preclude the calculation of disability-adjusted life-years lost to the disease—information that is essential for soliciting philanthropic support for re-search,” he writes.

What we need is “focused research to identify the cause of these diseases,” says Kushwaha. When asked about what could be causing aes, D T Mourya, director, National Institute of Virology, Pune, says that the institute is working on several aspects of this problem ranging from epidemiology to laboratory investigations and that “it is premature to make any comments at this stage”. Till the time a solution is found, doctors must also keep scrub typhus in mind while treating patients. Prevention too can reduce cases. “There is no vaccine to prevent this disease. Hence, the preventable measures are personnel protection and vector control,” suggests  Khan.”