How to tame the mosquito

India does not have to bear the onslaught of vector-borne diseases year after year. It is possible to control mosquitoes that spread these diseases 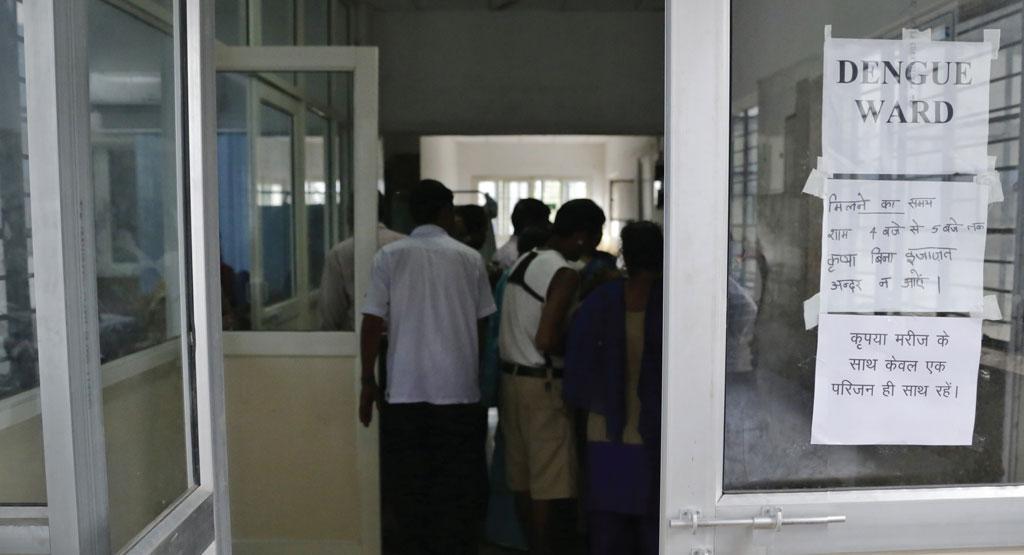 Scientists say a month of concentrated efforts is all it takes to control mosquitoes responsible for diseases like dengue and chikungunya. But the claim sounds far-fetched at a time when almost the entire country has been reporting these diseases for the past eight months (see ‘Vector war intensifies’).

The country registered 36,110 confirmed cases of dengue and 14,656 cases of chikungunya till September 11. Government data shows dengue has also claimed 70 lives. An alarming number of cases have been reported of another type of fever whose symptoms are similar to chikungunya and dengue. It is being dubbed mystery fever. Unable to understand what causes the fever, government agencies have started screening for Zika, another vector-borne disease, as a precaution. The National Institute of Virology, Pune, has already checked over 300 blood samples for Zika virus, but the samples have tested negative, confirms D T Mourya, director of the institute.

Ask B N Nagpal, scientist at the National Institute of Malaria Research, Delhi, why the country has failed to avert such an outbreak of vector-borne diseases and he says it is because of lack of political will. “Even if existing methods are employed properly, it is possible to control the population of mosquitoes,” says Nagpal. His sentiments were echoed by the National Green Tribunal, which on September 21, reprimanded the Delhi government for its “shameful and shocking” response to the outbreak. The capital has so far registered four dengue deaths. 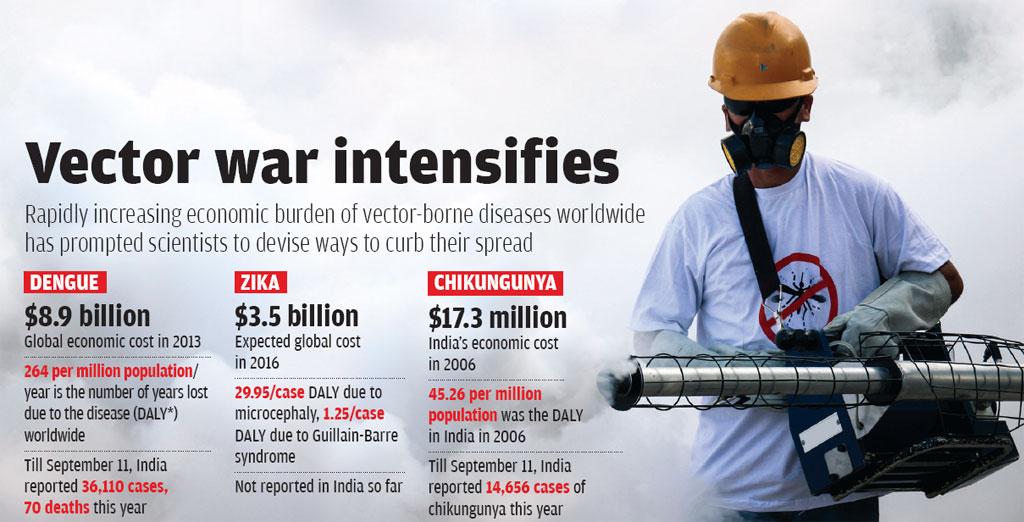 A fallout of this political apathy has been the failure of the government to adapt to the changing nature of Aedes aegypti mosquito, which is responsible for the diseases plaguing the country.

Normally, the mosquito would breed only in clean stagnant water accumulated in potholes, discarded containers and tyres. Not only has intermittent rains associated with climate change increased breeding places for the mosquito, the vector is also adapting to newer environments. Now there is evidence that it can grow in dirty water, using it as a habitat throughout the year. A study published in the Indian Journal of Medical Research in 2015 shows that Aedes mosquitoes that breed in dirty water are bigger and have longer wing spans. The National Vector Borne Disease Control Programme’s 2016 Urban Vector-Borne Disease Scheme does not consider dirty water as a breeding area. The authors of the 2015 study suggest that the country’s vector control programme should include sewage drains as breeding habitats of dengue vector mosquitoes.

The scheme includes methods such as controlling mosquito breeding sites, use of anti-larval methods with approved larvicides and biological control through larvivorous fishes and biolarvicides. And even these are not being employed properly, which is clear from the current outbreak.

High on research, low on practice

Many innovative methods have been developed in the past few years to fight mosquitoes, but they are still in experimental stages (see ‘Pull the weapons’,). One way is the use of crowd-sourced data to predict the disease outbreaks in advance. Scientists at Nanyang Technological University (NTU), National University of Singapore (NUS), and the Indian Institute of Technology Bombay, Mumbai (IITB), collaborated to create a web- and mobile-based application for dengue surveillance. The Mo-Buzz application combines three elements of dengue management—predictive surveillance, civic engagement and health communication. It was first used in Colombo in 2013 through a group of Sri Lanka’s public health inspectors. The inspectors monitored different areas in the city and fed their reports in the system, which used a pre-loaded algorithm to generate hotspots of infection in real time. “The predictions informed public health inspectors about the areas that needed immediate interventions,” says May O Lwin, professor at NTU and the principal investigator at Mo-Buzz. The application also allows citizens to “report dengue-breeding sites through geo-tagged picture reports”. The application has not been tried in India so far because of funding issues, says Ravi Poovaiah of IITB, who was part of the team that developed the app. 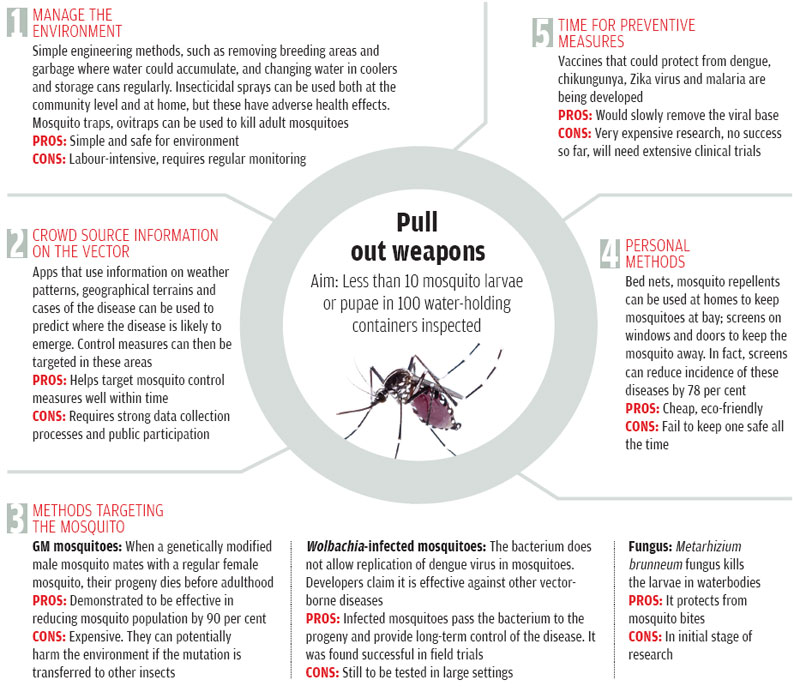 In fact, the lone experiment in India to use crowd sourced data for sensitising people about dengue has been tried by a Mumbai-based agency called Vamanetra Digihealth. The company, set up in April 2014, started an app in Mumbai to detect dengue-breeding spots in the city. “The response from the public was lukewarm primarily because of limited marketing of the product and the underlying campaign,” says Rintu R Patnaik, managing partner, Vamanetra Digihealth. He adds that the veracity of data is a big issue on crowd-sourcing platforms. “The challenge we faced in running the trial was similar to what the public health teams regularly face—people are generally unwilling to volunteer or allow health workers to find trouble spots that can allow mosquito breeding.” Though the company has stopped developing apps that require crowd sourcing of data, they are still working on modules that rely on government data and open data sets. Patnaik says the behaviour of people can change for the better “through greater media coverage and awareness”.

Researchers across the globe are also actively developing genetically modified (GM) mosquitoes to control vector population. GM mosquitoes are created by injecting the eggs with modified DNA. The male progeny is released to mate with normal mosquitoes and their progeny has a short lifespan. Oxitec, a British company, has tested GM mosquitoes in Piracicaba, Brazil, and found that it resulted in an 82 per cent decline of the mosquito population in the area in just eight months. In August this year, the company got a go-ahead from the US Food and Drug Administration to release the GM mosquitoes as part of an investigational field trial in Key Haven in Florida Keys. Residents of Key Haven will soon vote on the trial and the final approval will be given by the Florida Keys Mosquito Control Board. “In India, we have recommended controlled field trials of GM mosquitoes,” says K Gunasekaran, scientist at the Vector Control Research Centre in Puducherry. He says the Department of Science and Technology is in the process of preparing guidelines for conducting trials in India. 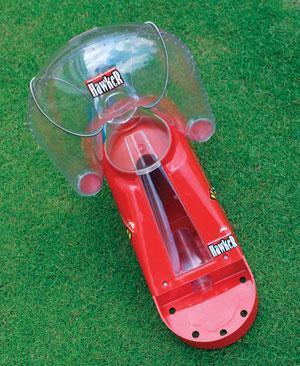 The use of GM mosquito, however, is controversial as they have been implicated in the spread of the Zika virus. Zika virus infection began in those areas of Brazil where Oxitec had first released the modified mosquitoes. Even activists in Florida Keys are against the use of these mosquitoes.

Use of Wolbachia bacterium has shown potential in controlling the vector. The bacterium reduces the growth of the disease-causing virus such as dengue, chikungunya and Zika in the body of Aedes aegypti. Both Wolbachia-infected male and female mosquitoes are released into the environment. When they mate with normal mosquitoes, they transfer the bacterium to the progeny. Wolbachia is self-sustaining. “This makes the method cost effective,” says Lewti Hunghanfoo, communications adviser for Eliminate Dengue, international collaboration led by Monash University, Australia.

Some experiments have also shown that when Wolbachia-infected male mosquitoes mate with normal female mosquitoes, they are unable to reproduce. Singapore plans to introduce male Aedes mos quitoes carrying Wolbachia bacteria in three housing estates in October this year. The field trial will continue for six months to assess the impact on the mosquito popu lation. India too plans to use Wolbachia in the next two years.

Preliminary research shows that parasitic fungus Metarhizium brunneum has the potential to control the population of the Aedes mosquito. A study published on July 7, 2016, in PLoS Pathogens demonstrates that the fungus can attack Aedes larvae in a rapid and effective way. Researchers of the study say the approach is safe for humans. The biggest advantage of the fungus is that it grows in freshwater, which is the natural habitat of Aedes mosquito.

There is an Indian invention to combat mosquitoes as well. Hawker is an indigenous mosquito and fly trapper developed by Kerala resident Mathews K Mathew. The device uses biogas to lure mosquitoes and sunlight to kill them. It makes use of the smell from the septic tank to attract the mosquitoes. Once the mosquitoes get trap ped, the heat built up inside the device kills them. Mathew says a single Hawker can control mosquito population in 0.4 hectare of land and its surroundings. He initially used Hawker in churches and old age homes and has got a patent for the product. He now plans to start mass-producing the device, which currently sells for Rs 1,500. 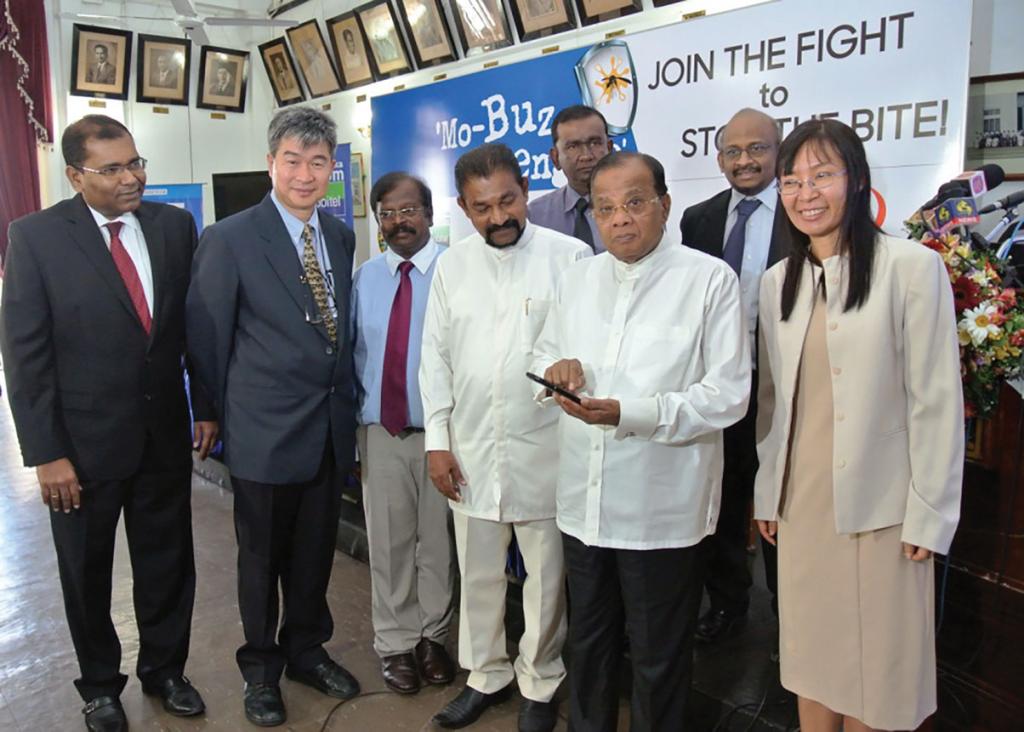 He is in talks with officials of the Kochi Municipal Corporation (KMC) because the city has over 260,000 septic tanks. A senior KMC official says, “The device is the most effective fly remedy we have seen so far. It does not produce chemicals or other toxic waste and has a larger operational area with little maintenance cost. We have already proposed to use Hawker widely.”

Experts say the key lies in using a combined effort, which should have both national policies and local innovations.

“All the innovative methods have potential, but it is unlikely that any of them when used alone, will be effective in disease prevention and control. None has been fully validated so it is too early to tell which will be most effective,” says Duane J Gubler, professor emeritus and founding director of Signature Research Program in Emer ging Infectious Disease, Duke-NUS Medical School, Singapore.

The vector Aedes aegypti has spread across the globe and India is infested with it. It is time we used the one-month opportunity to control the population. We have both established and experimental tools. “These are not difficult to implement. What is difficult is to have sustainable commitment by the government and the people,” says Gubler.

The story has been published in the 1-15 October, 2016 issue of Down To Earth magazine