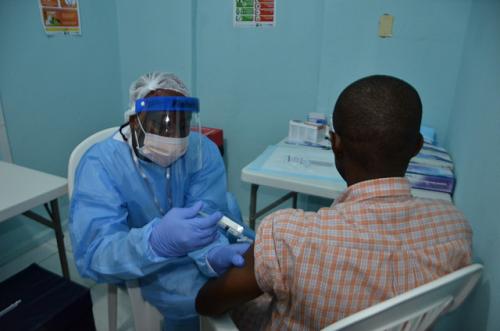 Almost a year after the official end of the Ebola outbreak in West Africa, the final results from one of the only Ebola vaccine trials are now in – and they look very promising. This is the only data we have on a vaccine against a virus in the Ebolavirus group in humans, and it looks very safe and highly effective during an outbreak setting.

Writing in the journal The Lancet, an international team led by the World Health Organisation (WHO) has shown the ‘rVSV-ZEBOV’ vaccine produced by Merck can protect both individuals and a whole population, through its trials in Guinea. How they were able to run such a successful scientific study with such impressive results in the midst of an ongoing, serious epidemic serves an invaluable lesson to the public health community. This is especially true when other trials against Ebola were cut short or never got as far as this one.

The West African outbreak of Ebola virus disease began in December 2013, infecting nearly 29,000 people and killing about one third of those. It was brought to an end in June 2016 through the hard work of local groups working with international teams of medical staff, using established methods to identify cases, isolate the patients and trace who else they had had contact with.

But success was never guaranteed and pursuing a vaccine that can protect an entire population is a critical part of a strategy for ending and preventing epidemics now and in the future.

The rVSV-ZEBOV vaccine had looked extremely effective in gold-standard preclinical testing in non-human primates. But no large investigations in humans had been carried out until the recent outbreak occurred.

Testing a vaccine during a serious outbreak poses a problem for scientists. Ideally, you would give 50% of the population the vaccine and leave the other 50% as a control group, simply counting how many people get disease in one half compared to the other. But if there aren’t enough cases of the disease, it might be difficult to observe what effect the vaccine really has. And there’s a serious ethical issue in withholding a vaccine that has a good chance of being safe and effective from half the population, which may lead to more death and allow the disease to spread further.

This trial got around these issues by implementing a vaccine strategy that goes back to the days of smallpox elimination half a century ago: ring vaccination. This involves identifying people who already have the disease – the index cases – and tracing all the individuals in contact with them, and then the contacts of those contacts, which are usually friends, family and carers. You then vaccinate all the people you can in theses clusters around the outbreak victims.

The Ebola team split their clusters of people randomly into groups for immediate vaccination or delayed vaccination after 21 days. This meant that they could work out how effective the vaccine was, just by counting how many people – and how many clusters – had Ebola and compare the immediately vaccinated to the delayed group. They even had a “never vaccinated” group of people they couldn’t vaccinate, for example because they didn’t consent, they could also compare to.

The rVSV-ZEBOV vaccine looked so safe and effective during an interim analysis that the team had to stop the delayed vaccination and vaccinate everybody they could, including even children. The further analysis in this study supports those initial conclusions. They found no cases of the disease in the immediately treated group compared to 23 cases in 11 clusters in the delayed or never vaccinated group.

When they zoomed in on each cluster, they could even see that vaccinating individuals in a cluster would stop unvaccinated people in the same cluster getting infected. This suggested they had developed what’s known as herd immunity, where enough people in a group are immune to prevent an outbreak – protecting even those who aren’t vaccinated. Because of this success, it looks like the trial probably helped bring the outbreak in Guinea to an end.

While the data suggests the vaccine is 100% effective, this is not likely to be the definitive number. Biology simply does not work like that. This is especially true when the numbers looked at are so small (23 cases in the control group). The potential inaccuracy of this number likely reflects the challenges in conducting a vaccine trial such as this, for a disease like EVD in the middle of a very serious outbreak.

There is also the fact that no vaccine is perfect. Even one of our very best vaccines, the measles vaccine, is only about 95% effective. Previous studies have even shown that rVSV-ZEBOV produces an immune response in only 94% of individuals. Being certain about the effectiveness is important because computer models suggest that ring vaccination for Ebola may only be successful when there aren’t that many cases.

Despite being carried out under some of the most challenging conditions, the trial reported here appears to be an exceptionally well-run study, comprehensive in its nature and with a very positive result. This surely cements this vaccine as one important tool in controlling outbreaks of Ebola in the future. It also gives us a way to test new vaccines for other viruses that can crop up and take us by surprise, such as Lassa fever virus and Nipah viruses. We just have to hope that scientists have got more vaccines in the pipeline for us to test.