After witnessing a steady decline for over a decade, hunger increased in 2016 and now affects 815 million people worldwide

In a development that can seriously defeat the Sustainable Development Goal 2 of achieving zero hunger by 2030, a new report warns that global hunger is on the rise again. After declining for over a decade, hunger increased in 2016 and now affects 815 million people worldwide (11 per cent of the global population).

The United Nations report titled The State of Food Security and Nutrition in the World 2017 blames increasing conflicts and violence in several parts of the world for the rise in the number of hungry people. In 2015, 777 million were estimated to be hungry.

“Over the past decade, conflicts have risen dramatically in number and become more complex and intractable in nature,” the heads of the Food and Agriculture Organization (FAO), the International Fund for Agricultural Development (IFAD), the United Nations Children’s Fund (UNICEF) the World Food Programme (WFP) and the World Health Organization (WHO) say in their joint foreword to the report. 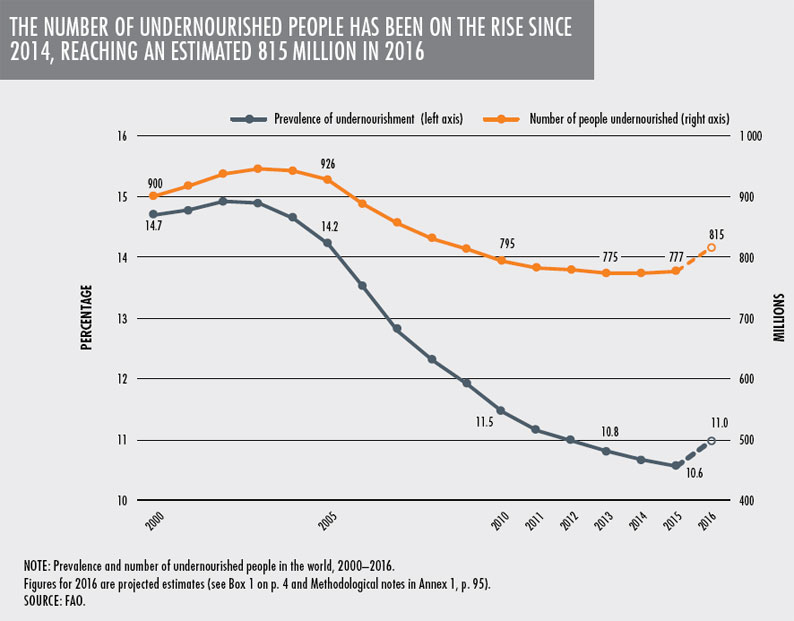 According to the report, the food security situation has deteriorated in parts of sub-Saharan Africa and South-Eastern and Western Asia. Worsening has been seen in conflict situations, often made worse by droughts and floods. Owing to the size of population, the highest number of undernourished people lives in Asia. The FAO estimates that in 2016 almost 520 million people in Asia, over 243 million in Africa and more than 42 million in Latin America and the Caribbean did not have access to sufficient food energy.

Multiple forms of malnutrition are threatening the health of millions of people worldwide. The increase—38 million more people than the previous year—is largely due to conflicts and climate-related shocks, the report points out. Some 155 million children aged under five are stunted while 52 million suffer from wasting.

Side by side obesity rules the scenario. An estimated 41 million children are now overweight, the report adds. This is mainly due to changes in dietary habits. An estimated 41 million children (about 6 per cent) under five were considered overweight in 2016, up from 5 per cent in 2005. When it comes to Asia-Pacific, many countries in the region face the triple burden of malnutrition, micronutrient deficiencies and obesity.

Africa continues to suffer as a result of violence and famine. Famine struck parts of South Sudan for several months in early 2017, and there is a high risk that it could reoccur there as well as appear in other conflict-ridden countries such as northeast Nigeria, Somalia and Yemen, the report says.

FAO identifies 19 countries with a protracted crisis situation. Of these, 14 have been in this category since 2010, 11 of which are in Africa. Protracted crises are contexts in which a significant proportion of the population is acutely vulnerable to hunger, disease and disruptions to livelihoods over prolonged periods. 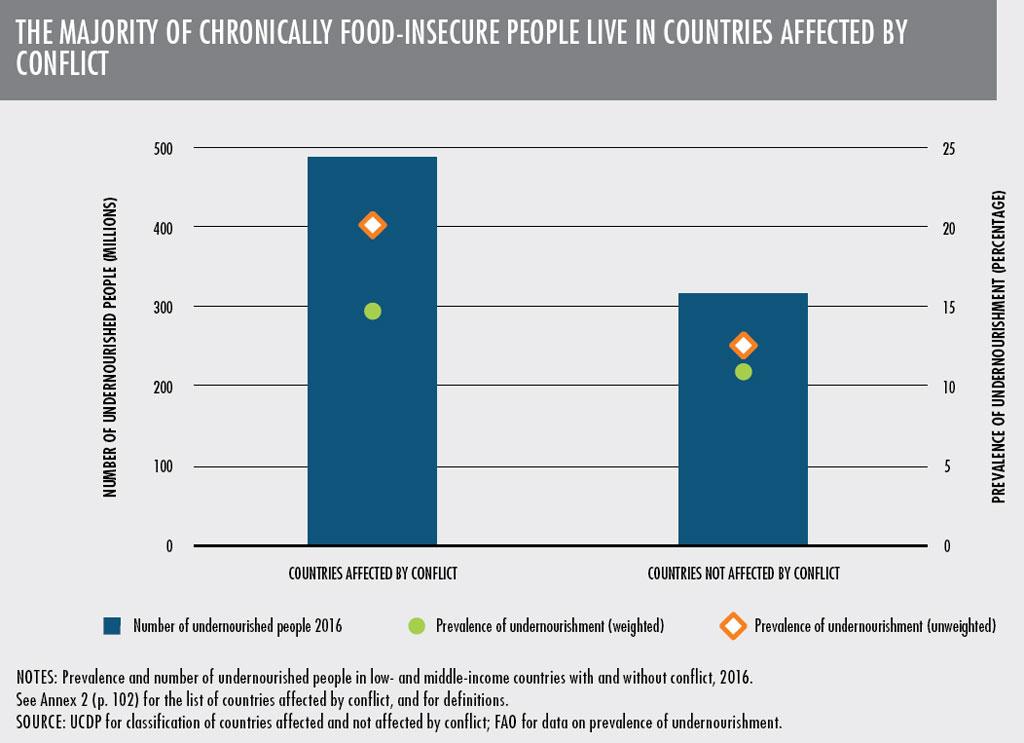 Both charts taken from the report