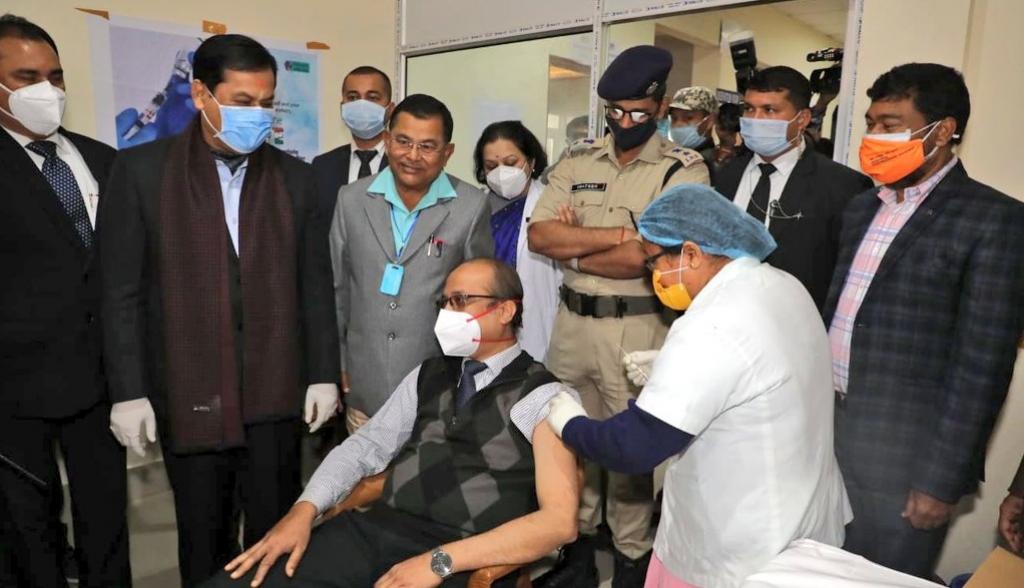 Assam rolled out the two vaccines authorised for emergency use against the novel coronavirus disease (COVID-19) in 65 centres January 16, 2021, along with the rest of the country. The state government received around 20,000 doses of Bharat Biotech International Ltd vaccine candidate Covaxin and 201,500 doses of Serum Institute of India’s Covishield.

It allocated the former to six centres in Barpeta and Sonitpur and the latter to the remaining 59 centres across the state, including the Guwahati Medical College and Hospital (GMCH) in the heart of the state’s biggest city.

Both candidates need to be stored at temperatures between two and eight degrees Celsius. For this, the state has 723 cold chain points, 27 district vaccine stores, five regional vaccine stores and one state vaccine store, S Lakshmanan, mission director for the National Health Mission in Assam, said.

He also denied there being any criteria as to which centre would get what candidate. It was important only to make sure that centres received the dose of that very candidate in the future, so as to not mix the vaccines, he said.

Sarma was one of the doctors to be vaccinated at the GMCH drive that saw 100 staffers — doctors, nurses, ward boys, paramedics — get their first Covishield dose January 16.

All were monitored for a 30-minute period to check for adverse effects following immunisation (AEFI). The authorities aim to increase the number of people vaccinated each day.

According to data released by the state, there were 3,528 beneficiaries across Assam on Day 1. Of these, three — from Tinsukia, Golaghat and Bongaigaon — were reported to have suffered from AEFI that were “minor” in nature.

According to officials present at the drive, the vaccination of healthcare and frontline workers — such as sanitation workers, ambulance drivers, etc — will take two months. Then the state will make the vaccine available to citizens, favouring those over the age of 60 and those living with co-morbidities.

“It is a new vaccine, so people are reluctant,” he said. Staff nurse Bhonima Kalita, waiting for her turn, said she was “somewhere between frightened and excited”, but would go ahead with the vaccine anyway.

Sachin Patel, a trainee surgeon in the department of urology, was also given his first shot January 16, which he took because it was Covishield and not Covaxin.

“I was worried about which vaccine we would get and had to confirm it was Covishield,” he said on the phone.

Patel said he had to persuade a colleague of his, a COVID-19 survivor, to take even this candidate, as he finds there is a lot of wariness among the medical fraternity and the general public.

Patel observed a sudden spike in awareness of clinical trials among his colleagues and in patients and their relatives.

“In medicine, safety and efficacy is only proved after phase 3,” he said, pointing to the fact that Bharat Biotech’s Covaxin has not released its Phase 3 efficacy data.

While doctors are prepared for side effects from Covishield — “All vaccines come with side effects,” he said — he would avoid Covaxin.