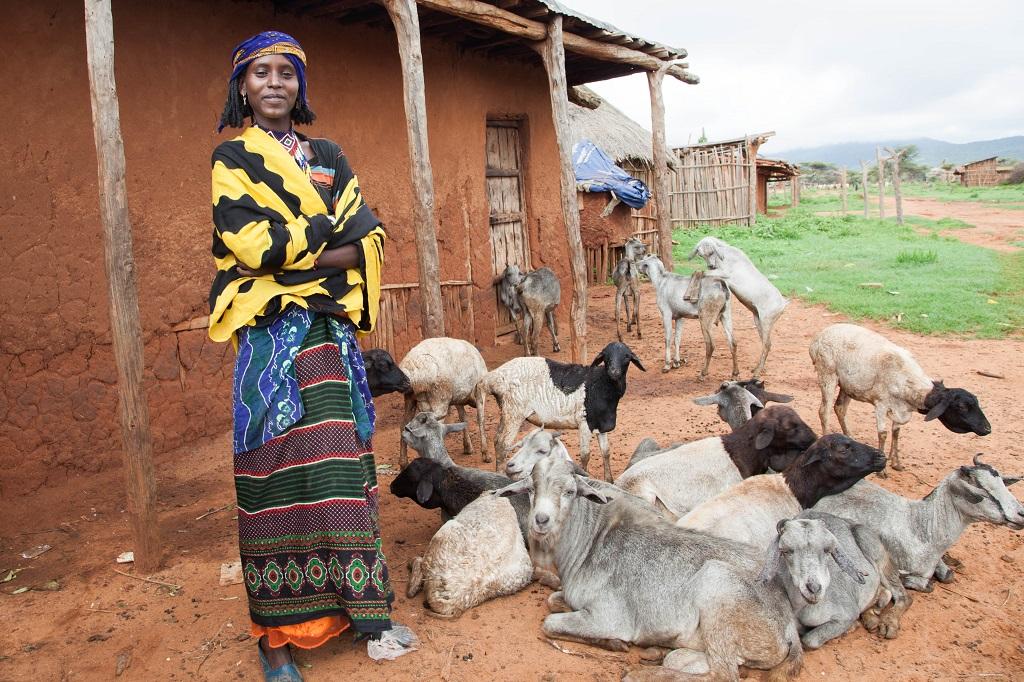 Soon, this farmer and her goats could be treated with the same vaccine. ILRI, Zerihun Sewunet/flickr, CC BY-NC-SA

If ever there were proof that humans are animals too, it’s in the diseases that we share with other species. From rabies and Zika to Ebola and bird flu, many deadly diseases around the world can pass between animals and people.

Currently, we have three options when trying to protect people from such zoonotic diseases. We can vaccinate the animals that can pass them on, the humans that can contract them, or take steps to help the two avoid contact. But what if there were a simple, inexpensive way to protect both people and other species at the same time, using the same vaccine?

This was my starting point when I decided to investigate the possibility of a single cross-species vaccine for Rift Valley Fever, one of the World Health Organization’s priority diseases.

Since emerging in Kenya in 1930, the mosquito-borne disease has spread to many African countries and the Arabian Peninsula, causing disease outbreaks that have affected millions of livestock and hundreds of thousands of humans.

During such outbreaks, the disease kills more than 90 per cent of young animals and causes nearly 100 per cent of pregnant animals to abort their foetuses. This can destroy livelihoods in largely agricultural societies. For example, an outbreak in Kenya in 2006 and 2007 cost the agricultural sector estimated losses of over $32m, with profound social impacts among affected communities. In humans, the fever is less severe but can occasionally cause encephalitis, blindness, haemorrhage and even death.

The most widely used animal vaccines are not recommended for pregnant animals due to risks of abortion and malformation, while there is currently no licensed vaccine readily available to protect humans from Rift Valley Fever. This leaves, farmers, animals, and their unborn offspring at risk.

Since clinical trials are always the final stage in demonstrating that a vaccine is safe to use in humans, my colleagues and I started by using a technique that has extensively been shown to be safe for human vaccination against a host of diseases, including influenza, malaria, and Ebola.

The technique uses a chimpanzee respiratory virus (adenovirus) to expose individuals to just a small part of the Rift Valley Fever virus — enough for the immune system to recognise a future infection, but not enough to cause an infection in itself. As this incomplete virus is markedly different to the full virus, the technique allows animal health practitioners to accurately test whether an animal is vaccinated, or an infected but symptomless carrier. This is crucial during outbreaks, as false positives can lead to unnecessary culling of livestock, increased costs, and reduced cooperation of farmers in the fight to control the disease.

In our earlier studies, we found that a single dose of this vaccine, the first of its kind, provided 100% protection against Rift Valley Fever in multiple livestock species in Kenya. We expect the vaccine to perform equally well in livestock field trials, a key step in a vaccine’s journey towards widespread use. And because of our adenovirus technique, we also expect that it will pass human clinical trials planned for early next year.

This cross-species approach, known as “One Health”, is an underutilised tool in the development of vaccines against shared disease threats. By using advances in human vaccine research for the benefit of veterinary vaccines, and vice versa, researchers can better unlock the shared biological mechanisms underlying disease immunity, accelerating the design and development of vaccines across species.

This approach also saves time and money. Key differences in regulations between human and animal vaccine development mean that many aspects of what is actually a highly similar process are unnecessarily duplicated. By actively leveraging similarities between species, time-consuming technical hurdles at various stages of the vaccine development process can be leapfrogged, and the often extremely high costs of both development and production can be streamlined. And in producing a single vaccine, we would anticipate easier collaboration between human and animal health practitioners in controlling disease spread.

I am hopeful that this cross-species vaccine will pass human trials and pave the way for further treatments and immunisations in the One Health vein. At least 60 per cent of all existing infectious diseases of humans originate with animals, and the One Health vaccine approach holds hope in the fight against many of them.

More than this, it may provide species other than our own a crucial line of defence against newly emerging deadly diseases. Vaccine development for sudden outbreaks of Ebola, for example, has tended to be frantic and human-focused, leaving a third of the world’s chimps and gorillas dead. With a One Health hat on, future vaccines may not just be a tool to protect human health, but biodiversity too.