Those born in autumn or winter are more prone to allergies 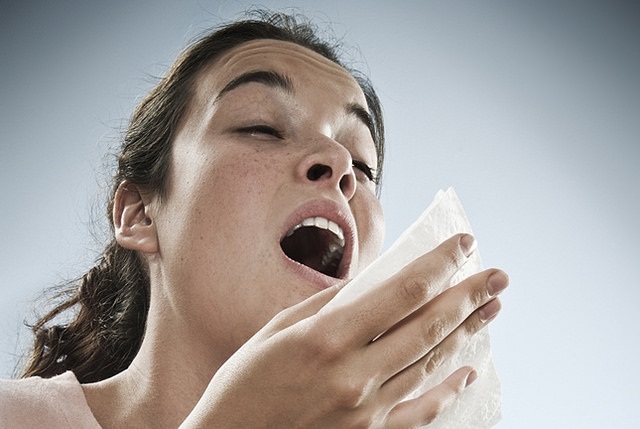 People born in autumn or winter are more likely to suffer from allergies than people born in spring or summer. Nobody is certain why this is, but there are several theories. These include seasonal variations in sunlight (which could affect vitamin D levels), levels of allergens such as pollen and house dust mite (which vary by season), the timing of the baby’s first chest infection (colds tend to be more common in winter), and maternal diet (price and availability of fruit and vegetables vary by season).

But no matter which of these exposures causes changes to the risk of developing an allergy, until now nobody knew how these early environmental influences were so long lasting.

Our study tested whether epigenetic marks on a person’s DNA could be a mechanism behind these birth season effects. Of course, your genome doesn’t change depending on which season you’re born in, but there are epigenetic marks attached to your DNA that can influence gene expression – the process where specific genes are activated to produce a certain protein. This may result in different responses to immune triggers and hence different susceptibility to diseases.

Unlike DNA, which is inherited from your parents, epigenetic marks can change in response to the environment and allow gene expression to respond to environmental exposures. And they can also be very long-lasting.

We scanned DNA methylation (one type of epigenetic mark) profiles of 367 people from the Isle of Wight and found, for the first time, that the season in which a person is born leaves an epigenetic print on the genome that is still visible at the age of 18. This discovery means that these marks on the genome could be how season of birth is able to influence the risk of having allergies later in life.

We went on to test whether these DNA methylation differences that varied by season of birth were also associated with allergic disease. We found that two of them appeared to be influencing the risk of allergy in the participants. As well as allergies, other studies have shown that season of birth is associated with a number of things such as height, lifespan, reproductive performance, and the risks of diseases including heart conditions and schizophrenia. It is possible that the birth season-associated DNA methylation that we discovered might also influence these other outcomes but this will need further investigation.

The marks that we found in the DNA samples collected from the 18-year-olds were mostly similar to the epigenetic marks found in a group of Dutch eight-year-olds that we used to validate our findings. But when we looked at another cohort – a group of newborn babies – the marks were not there. This suggests that these DNA methylation changes occur after birth, not during pregnancy.

There’s something about the seasons

We are not advising women to change the timing of their pregnancy, but if we understood exactly what it was about birth season that causes these effects, this could potentially be changed to reduce the risk of allergy in children. For example, if the birth season effect on allergies was found to be driven by sunlight levels experienced by the mother during pregnancy or breastfeeding, then the increased risk of allergies among babies born in autumn and winter might be lessened by giving the expectant or breastfeeding mother vitamin D supplements. You wouldn’t need to time births with the seasons to get the benefits.

Our study reports the first discovery of a mechanism through which birth season could influence disease risk, though we still don’t know exactly which seasonal stimuli cause these effects. Future studies are needed to pinpoint these, as well as to investigate the relationship between DNA methylation and allergic disease, and what other environmental exposures have an effect.

With the considerable burden allergic disease places not only on individual sufferers but also on society, any step towards reducing allergy is a step in the right direction.