As India fights its first Zika outbreak, Down To Earth finds a grievously unprepared response system in virus-hit districts of Vidisha and Bhopal in Madhya Pradesh

Madhvi Sharma, 37, is three-month pregnant and distraught. On November 5, officials from the nearby Rajiv Gandhi Memorial Hospital came to her house in Madhya Pradesh’s Vidisha district. They were on a surveillance after Zika cases were reported from Sironj—the block where Madhvi lives. The team was particularly targeting pregnant women because Zika can deform foetuses. On finding she was pregnant, they collected her blood sample. Ten days later, Block Medical Officer RL Dinkar and a paediatrician from the hospital came and told her she had Zika and must undergo an abortion if she did not want to have a deformed baby. Madhvi’s first two children—both girls—are differently abled and her third child—a boy—had died within hours after birth.

Officials also advised Neeta Sahu, who lives in the same locality as Madhvi, to undergo abortion. “We were in two minds when we went to the block hospital. The gynaecologist checked my blood report and repeated the advise of abortion. Out of sheer scare, I got the foetus aborted then and there,” she says. She did so on November 26. Did the officials overreact in advising abortion? 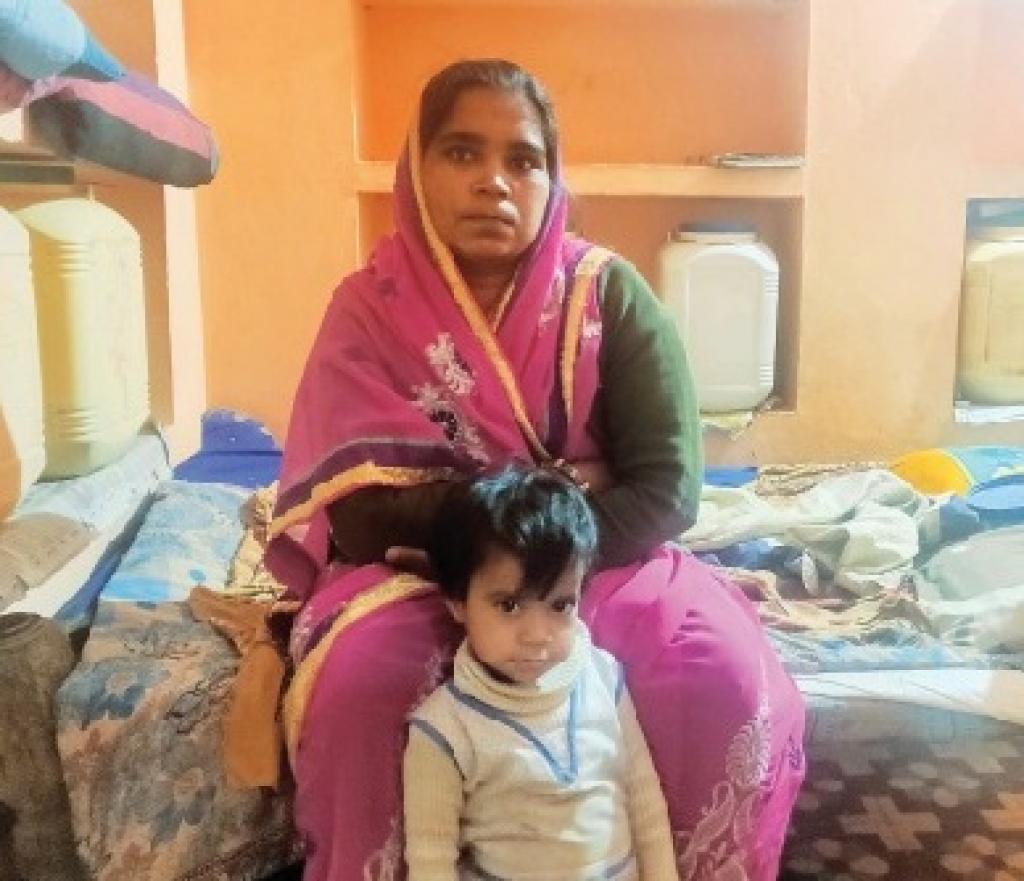 India is in the middle of its first major Zika outbreak. Between September 22 and November 27, 289 people have been found Zika-positive in Madhya Pradesh (130) and Rajasthan (159)—the only states with confirmed cases. Since fatality in Zika is just 8.3 per cent, according to a 2017 paper in the Pediatric Infectious Disease Journal, governments have not taken steps to deal with the virus. It was always known to cause mild fever, and was less dangerous than even dengue and chikungunya viruses, which are also carried by the same Aedesaegypti mosquito that carries Zika. But during the 2015 outbreak in Brazil, it became evident that Zika can deform foetuses.

This made governments across the globe take note. The World Health Organization declared a “public health emergency of international concern” on February 1, 2016. “Ten-fifteen per cent Zika positive pregnant women have babies with microcephaly, or underdeveloped head and brain,” says Nivedita Gupta, senior scientist at the Indian Council of Medical Research’s epidemiology and communication division. As a result, Madhya Pradesh and Rajasthan too increased surveillance of pregnant women living in Zika-affected areas.

But to advise abortion based on a preliminary blood test report appears extreme. Madhya Pradesh officials deny that they are advising abortion. “At this point we have absolutely no intention to ask mothers to undergo abortion. We are ensuring they take regular ultrasound tests to note any deformity in foetus. If a deformity is detected, we would take the case to the districts headquarters to confirm the abnormality with best-available ultrasound machines. Only then we would counsel mothers to consider abortion. It’s their call,” Pallavi Jain Govil, principal secretary of the Madhya Pradesh health department, told Down To Earth (DTE).

There is also an inexplicable secrecy about the screening process in MP. “When the officials came with the test result on November 15, they took an undertaking from me that I had been informed about Zika, advised abortion and that if I continued with the pregnancy, it would be at my own risk,” says Madhvi. “They did not give any receipt or copy of the report or the undertaking.”

Apart from Vidisha, where 50 cases have been reported, Bhopal (53), Sehore (21), Sagar (2), Raisen (2) and Hoshangabad (2) are the other Zika-affected districts of Madhya Pradesh. DTE accessed the list of all Zika patients in the state from officials who do not want to be named, and talked to three pregnant women in Bhopal and one in Sehore. But none of the four were even aware that they had the virus. “What Zika? No official ever told us that she is suffering from Zika,” says the husband of Deepika Satankar, who lives in Bhim Nagar, Bhopal. Babli Rajak and Aarti Ahirwal too denied being aware of Zika. Same was the case with Sarita Tarachand of Sehore. DTE could not access details of measures taken by the Rajasthan government because Sunil Singh, joint director, Rajasthan health department, refused to talk.

Could the government have been better prepared? “It was a bolt from the blue for us,” says Govil. However, Himanshu Jayaswar, the nodal officer for National Vector Borne Disease Control Programme, Madhya Pradesh, says that after the outbreak in Rajasthan, the Madhya Pradesh government got a letter from Union health ministry on October 9 and a statewide advisory was issued. The first cases were reported on October 30, one each from Bhopal, Sehore and Vidisha, and after that the government started containment drives by doing door-to-door surveys. “We issued treatment and surveillance advisories as per the protocol given by the ministry. The larvae identification zones were marked and Ae aegypti mosquitoes were killed. Sample collection from the affected areas was also increased. All the samples were sent to AIIMS-Bhopal,” he says.

Fear of the unknown

But why were these districts affected? “We don’t know yet,” says Jayswar. The state government has sent all the blood samples to the National Institute of Virology (NIV) to identify the virus strain. “A lot of people travel between Rajasthan and Madhya Pradesh but we cannot say anything conclusively till we get the report from NIV,” Jayaswar adds.

The strain of the virus in India is still a worry. In the case of Rajasthan, the Union government issued a press communiqué on November 3, quoting ICMR experts, which says that the “known” mutations of the virus do not cause microcephaly. However, Nivedita Gupta of ICMR says, “We are still not sure about the unknown mutations that may or may not cause microcephaly. It is an ongoing research. We have not been able to do sequencing of the virus strain found in Madhya Pradesh and whether it causes microcephaly. The virus could also lead to delayed developments in children born to Zika-affected mothers.” The sequencing could not be done because the volume of collected samples was not enough, she adds.

This is not the first incidence of Zika in India. In 1954, NIV had found Zika antibody in 16.8 per cent of the samples, as per a 2017 paper published in Mem Inst Oswaldo Cruz, a Brazillian journal. “Three cases identified in Gujarat and one in Chennai did not reveal any travel history to ZIKV [Zika virus] endemic region, suggesting that the ZIKV is not a recent introduction into the country and it may have been present as a vector-borne entity albeit in a silent, low-key ecological niche,” the paper states, referring to four sporadic Zika cases reported in India in 2016-17.

The Zika virus has two lineages —Asian and African. According to Gupta, the African strain was discovered in a monkey in Uganda in 1947. Over time, the virus mutated to a more dangerous strain, which spreads easily, known as Asian strain in the 2000s. It broke out in the Yap islands (2007), French Polynesia (2013-14) and Brazil (2016). The strain in Rajasthan was of Asian lineage, an ICMR scientist told DTE, requesting anonymity. 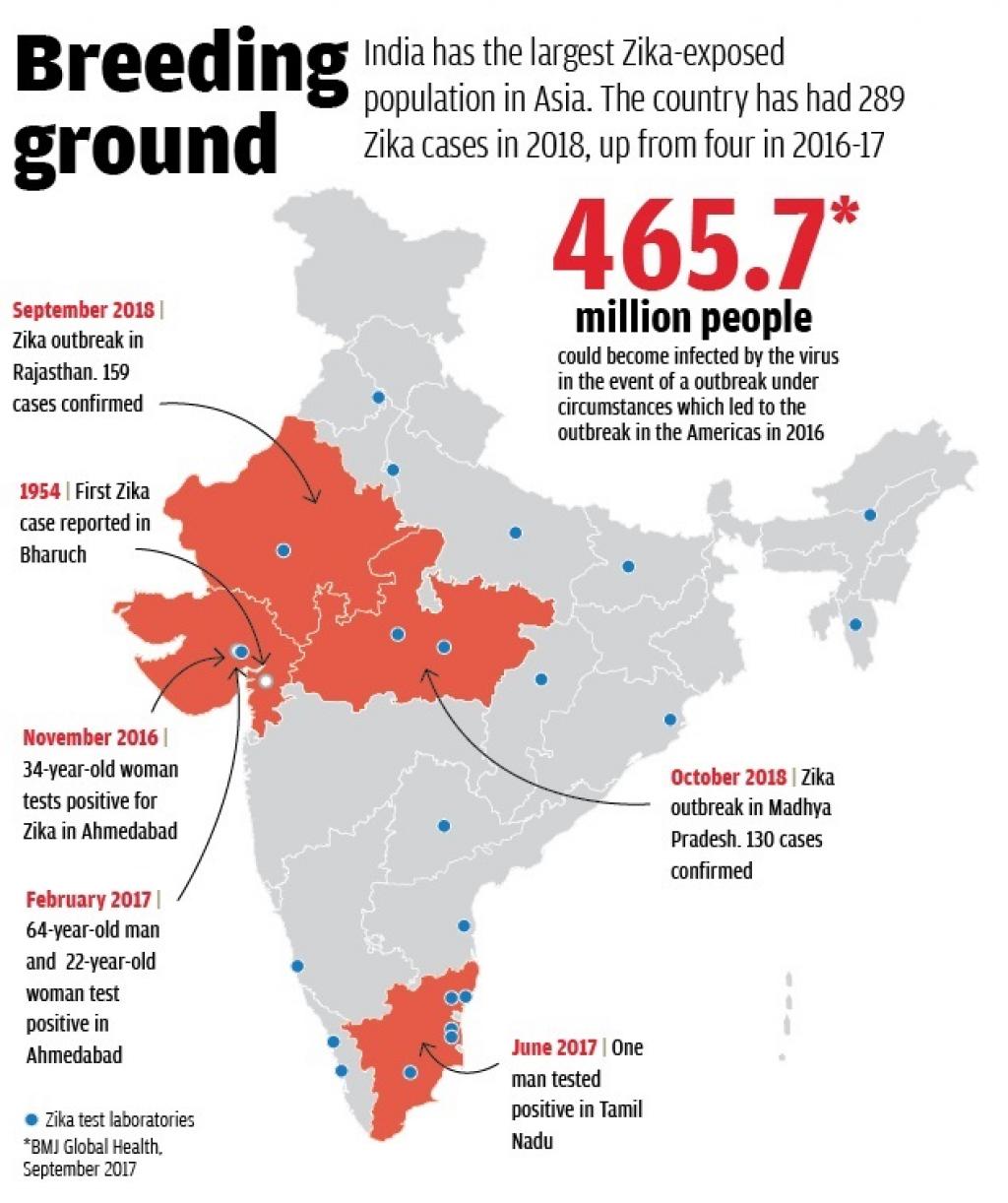 India has Asia’s most Zika-exposed population. A 2017 paper in BMJ Global Health says that 465.7 million people could become infected by the virus in an outbreak under circumstances, which led to the outbreak in the Americas. “At the country level, we project that India has the potential for the largest number of ZIKV infections by more than six-fold that of any other country, mainly due its large population and relatively high suitability for ZIKV transmission,” the paper states.

India could also be a breeding ground for Zika virus. “The environment in India is conducive for ZIKV because of preponderance of the Ae. aegypti mosquitoes. Though these mosquitoes breed throughout the year in and around the houses in potable water sources, the density is extremely high during monsoon since more number of breeding sites becomes available. High humidity and optimal temperature support their survival for many days,” states a 2017 paper published in the Indian Journal of Medical Research.

The paper points out that in India people face perennial water shortage due to which they tend to store water where this mosquito breeds. Madhya Pradesh principal secretary Govil too confirmed that most of the places where the larvae were detected had no supply of water and the community had to store water. Since Zika is largely asymptomatic in 80 per cent adult cases and can be confused with dengue or chikungunya, it is reasonable to assume that total number of cases in India are under-reported, wrote Farah Ishtiaq of Indian Institute of Science, Bengaluru, in a 2018 paper.

All the experts agree that vector control is key to control Zika. Requesting anonymity, an ICMR scientist told DTE that the institute has advised the health ministry to identify the foci areas of vector breeding before the breeding season and start robust surveillance. The government must also conduct research on Zika and teach it in medical colleges. It is yet to be introduced by the Medical Council of India in its curriculum.