Heavy on the purse?

Measuring efficiency of electric appliances fails to take off in India 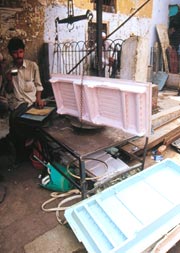 for a country that suffers from chronic power failures and electricity deficiency, India has been the slowest off the block to implement any kind of energy efficiency regulations. Electrical appliances and products continue to be sold without any labelling or rating process to measure their energy efficiency. The result: the consumers pay hefty electricity bills and the states hinge on the brink of a grid collapse every other day.

The potential of savings from getting electricity efficient goods in the markets remains unexplored but all experts aver that the savings can be tremendous. Imagine the colossal savings if all the houses in Delhi or Mumbai alone were to use a 20 per cent more efficient refrigerators or air conditioners?

So what is holding India back when other countries, not only the developed ones but also developing ones in South and Southeast Asia, have got their act together? While industry experts like to keep mum on record, one senior executive in a white good multinational remarks snidely, "I can only say it's Indian democracy at work. It took us nearly four to five years just to put together the Energy Conservation Act, 2001."

He refers to the Energy Conservation Act (eca) that was passed in October 2001. When the parliament gave its consent to the act, the government went to town proclaiming it as only the second piece of legislation of its kind in the world. A year down the line, the act remains largely unimplemented. It intended, like so many other pieces of Indian legislation, well though.
The act provided for the formation of a bureau of energy efficiency (bee) under the Union ministry of power. The bureau, which was formerly notified only in March 2002, is to work out norms for conservation of energy in all forms.

Its prime objective is to reduce energy intensity in the Indian economy. The management of bee is vested in the governing council, headed by the Union minister of power and comprises secretaries of various ministries, officers of technical agencies and representatives of manufacturers, consumers and state governments. bee has just come into shape with its designated director-general only recently taking office.

The Act provides for the setting up of a Energy Conservation Fund also.

One of the most important features of the act relates to standards and labelling. The Act seeks to:
• Evolve minimum energy consumption and performance standards for notified equipment and appliances;

• Prohibit manufacture, sale and import of equipment which does not conform to the standards;

Comparison labels are usually mandatory, implying regulation. On the other hand, manufacturers of electrical appliances usually implement endorsement labels on a voluntary basis.

In Europe, several countries introduced voluntary agreements in the 1980s and 1990s. Since 1999, an European Union (eu) directive has defined mandatory energy efficiency standards for refrigerators and freezers in eu countries. Japan chose a different approach that consists of defining a voluntary target for energy efficiency improvement by 2004.

Efficiency standards too can be set in a number of different ways. In eu, a statistical approach is used - the energy efficiency of appliances already on the market is used as a basis and the standard is drawn up so as to obtain an improvement of 10-15 per cent in the average energy efficiency of new appliances. In other countries, regulations are based on a cost-benefit evaluation (as in the us, raising energy efficiency levels to corresponds with financial returns on the investment in fixed number of years).

Experience has shown that labelling and performance standards are effective both for governments (energy savings) and consumers (lower expenditures). Labelling schemes have improved over time and are becoming easier to transpose. The eu label, for example, is easy to understand and has been adopted in several developing countries (such as Brazil, Iran and Mexico). Thailand has adopted the Australian model. By helping consumers identify the most energy efficient products and choose more efficient models, comparison and endorsement labels encourage manufacturers to focus on improving energy efficiency.


Put together the regime of standards and labelling gives the industry market-based tools to push the demand towards more energy efficient products. Such programmes are much better than the stereotypical subsidy approach. Avinash Barve, secretary, Indian Electrical and Electronics Manufacturing Association, says, "This sector does not need any tax rebates or subsides. Instead, if a market exists for the products and the government helps in further deepening the markets for better products, it would have served the purpose." Right now, he informs, the bee is targeting air-conditioners, refrigerators and water-heaters as a priority. Household electricity consumption is nearly 20 per cent of the entire country's annual consumption and refrigerators make up about five per cent of that -- about one per cent of the entire country's consumption. Therefore, bringing in some regulation even in this limited sector can have cascading effects.

It's not as if India has not made any moves at all in the direction. But they have been perfunctory. Even before the eca came into place the Bureau of Indian Standards (bis) had evolved voluntary minimum energy consumption standards for three electrical appliances, including refrigerators and air conditioners. But compliance was kept voluntary, and the standard being too lenient remained ineffectual. Consider the case of the 165 litre refrigerators. The bis mandates two kilowatt-hours per day for 165-litre refrigerators -- virtually all the models produced by the formal manufacturing sector easily meet the standard.

Navin Saxena, product manager at Philips India Limited, says, "The market out there is huge and growing at a faster rate than ever before. Cheaper Chinese goods are also flooding the market. It is time we got some regulations in place to tell the good ones from the bad." He says, sales of compact flourosent lights (which work at much lower wattage than conventional bulbs and tube lights) first surged in 2000 and this year too the sale has only increased. "But as compared to the conventional bulbs the sales are miniscule." He blames the sluggish market on lack of awareness. Barve agrees, "Right now the industry is in Catch-22 situation. The energy efficient products are priced higher because the sales are low and consumers do not buy it because the products are tagged so high."

The only chance the consumer as well as the industry has to break this circle of inefficiency is to ensure that the standards come into place at the earliest. "With expenditure on power becoming a huge chunk of costs incurred by user industries, the clamour for energy conservation has only increased." But when will the government get the right labelling and standardisation regulations in place remains anyone's guess.