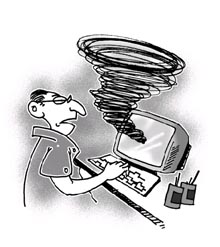 time and again, India's east coast has been battered by storm surges and cyclones. The loss of life and property often runs into millions of rupees. And frequently in the eye of the storm is the meteorological authorities, who are blamed for not flashing the warning signals beforehand.

To make the job of weather forecasters easier, scientists have developed a computer-based cyclone forecasting model that will indicate the severity of an impending cyclone at least 12 hours in advance. This will also help the authorities concerned take measures to minimise losses.

The model was developed by S K Dube of the Centre for Atmospheric Sciences at the Indian Institute of Technology, New Delhi, and his colleagues U C Mohanty, P C Sinha and A D Rao. By using parameters like wind speed, speed of the movement of the cyclones and geographical features of coastal regions, the new model can zero in on any area, says Dube.

It can identify the magnitude of the surge, the most likely areas where the surge is expected to hit and inundation areas up to 10-15 kilometres inside the coast. A surge or rise in sea level due to cyclones is the leading cause of death and damage because the rising wall of water floods large areas. This is a common phenomenon in India's east coast and Bangladesh (PTI Science Service , November 1-15, 1999). For calculation, the model requires satellite data, which can be collected from insat satellites, says Dube. The Indian Meteorological Department (imd) is, at present, testing the operational feasibility of the model for its inclusion in imd 's cyclone warning programme.

Compared to the current methods used by imd for weather forecasting, the computer-based model is more efficient as it can identify the exact areas which are likely to get inundated.

Furthermore, keeping in mind the different topography of different regions, the scientists have developed site-specific versions for seven cyclone-prone regions in the country. "We have prepared storm surge prediction models for Andhra Pradesh, Orissa, West Bengal and Gujarat coasts, which are the four major cyclone-prone coasts in India, says Dube.

Meanwhile, the Chennai-based National Institute of Ocean Technology has also developed a surge prediction model, which is claimed to be more efficient than the one developed by the iit scientists in representing the complex geographical features of the coast.