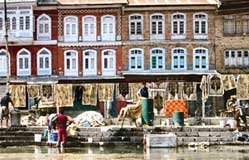 even as official apathy towards reducing seismic hazard continues in India, a computer simulation shows that the next big earthquake in the Himalaya may kill as many as 150,000 people and injure almost twice that number.

The study carried out by Max Wyss, director of the Geneva-based World Agency of Planetary Monitoring and Earthquake Risk Reduction, projects that about 3,000 moderate to thickly populated settlements in the region could be affected. About 50 of them may have 2,000 fatalities or more each. Formerly with the University of Alaska, Fairbanks and the University of Colorado, Wyss is a technical consultant to India and a dozen other countries on seismology issues. The findings appeared in a recent issue of Natural Hazards (Vol 34, No 3).

Wyss studied possible ruptures at seven 150 km segments of the boundary of the Indian tectonic plate. He found that all locations have sufficient energy stored to cause an earthquake of magnitude 8 on the Richter scale. "Although the time of a future earthquake is unknown (with the present scientific knowledge), there is no doubt that a magnitude 8-class earthquake will happen along the front of the Himalaya," Wyss said in the paper.

The simulation used has a success rate of 92 per cent (in assessing possible fatalities). It was verified for 17 disastrous earthquakes that have hit the country since 1980. In 15 of the 17 quakes, predicted toll differed from the actual one by fewer than 10 deaths.

Among the cities that could be hit hard by a potential earthquake are Gangtok, Haridwar, Dehra Dun, Nainital, Almora, Pathankot, Chandigarh and Udhampur. A few places in Bhutan, Nepal and Tibet could be affected, too.

An important parameter used to calculate the toll was the quality of construction. Another recent study, which examined the October 8, 2005, quake in Kashmir, says construction quality has perhaps the largest impact on human toll. As many as 73,000 people were killed in the quake mainly because of poor quality construction in the region, claims Roger Bilham, a seismologist at the University of Colorado, usa.

About half a million dwellings and 7,600 schools that collapsed in the Pakistan-administered Kashmir were almost entirely built in the past 20 years and "collapsed more from poor assembly than from severity in shaking," Bilham wrote in Science (Vol 311, No 5769, March 31, 2006).

A team of scientists from the Indian Institute of Technology (iit) Kanpur, which carried out a reconnaissance survey in the Indian part of Kashmir reached similar conclusions. It found that while the houses built with traditional timber-laced masonry techniques survived the tremor, the recent ones made with reinforced concrete were razed. "The dwellings constructed using the Dhajji-dewari system (a technique perfected over centuries where bricks or stones are filled in a timber frame in small patches) suffered little or no damage," the iit researchers said in a paper published in Current Science (Vol 90, No 8, April 25, 2006).

"Interestingly, this type of construction has been around for centuries together, and can be seen in all Himalayan-Alpine regions right from Sumatra to Turkey. For instance, in the northeast the traditional construction technique similar to Dhajji-dewari is called ekda," says C V R Murty, professor of earthquake engineering at iit. These traditional masonry practices impart to the buildings the ability to resist earthquakes, in contrast to contemporary colonial-style buildings, and should be revived, say the iit scientists.

The 2005 Kashmir earthquake should serve as a wake-up call, says Bilham in an article in the February 2006 issue of the South Asian Journal. He says that almost the entire Himalayan region has construction similar to that in Kashmir. To reduce seismic risk, cities may have to be substantially rebuilt. This can be easily done over a few decades if all new buildings are made quake-resistant and older ones when rebuilt or renovated are also made shock-proof, says Bilham.