Hit by storm, 15 trawlers are missing in Bay of Bengal

The boats have 240 fishers on board 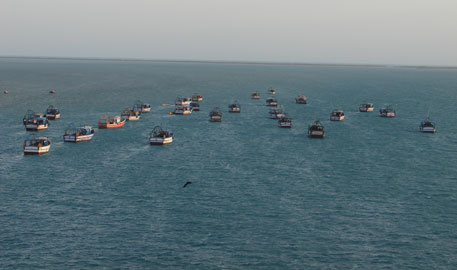 Three trawlers have capsized and 15 others, carrying 240 fisherpersons, have gone missing in the Bay of Bengal near Kakdwip in South 24 Praganas districts following a storm off the coast last evening.

Forty trawlers, each carrying 16 fishers, had gone to sea for fishing a few days ago. Contact between them and a liason unit of fishermen association snapped during the storm, say media reports. So far, the coast guards have traced 25 trawlers. Three of them capsized near Jambu Dwip island in the sea. Of the 32 fishers on board, 25 were rescued and seven others are missing. “Efforts are on to locate the missing trawlers,” says Sunderban Development Minister Manturam Pakhira.

Weather officials say low-pressure will continue to hover over the north Bay of Bengal and its adjoining areas over the next 24 hours. Storms and cyclones over the Bay of Bengal kill hundreds every year, destroying homes and farmland in India’s eastern coastal states and Bangladesh.