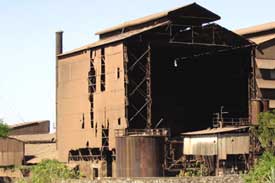 LAND is equal to real estate in Mumbai. Any land, even when poisoned. In Dahisar, Mumbai's northernmost suburb, it is construction boom time, even by Mumbai's dizzying real estate standards. Sites for large residential and commercial complexes are selling sooner than you can say buy. The USP: proximity to both the western express highway and the Sanjay Gandhi National Park. Some prominent builders have already begun construc-tion -- one complex under construc-tion boasts a plush residential complex, a commercial complex and a shopping mall. As per municipal development rules, there's nothing wrong with the construction. But dig deeper and prob-lems begin to erupt.

Most apartment complexes are coming up on erstwhile industrial sites, some heavily contaminated with toxic waste. Builders, who have bought these sites from industrialists, can't be both-ered -- there is no effort to study conta-mination levels or take up remedial measures.

The Municipal Corp-oration of Greater Mumbai's (MCGM) devel-opment plan department has shrugged off the at-ter; the Development Control Regulations, 1991, do not prohibit res-idential or commercial complexes on former industrial sites. Industrialists are respon-sible only for labour welfare. Nobody maintains any database of industrial sites now cleared for residential purpos-es. "Our database has only village name, plot number and survey number. It doesn't mention if it is an industrial site converted to residential.... If a certain upcoming building is higher than 70 metres, the builder gets a project pro-posal cleared by the high-rise committee of the development plan department," who've studied the functioning of these committees say the members in such committees are not well versed with the technical issues of environmental pollu-tion. This ensures a hassle-free clearance for most projects.

At risk are thousands of people who live here or plan to do so. Down To Earth (DTE) has looked at two sites at different stages of 'development': the Golden Chemicals Pvt Ltd (GCL) site at Dahisar, which is about to be sold to builders, and Excel Industries Ltd's (EIL) plot at Oshiwara in Andheri, where a pesti-cide factory operated ear-lier and which has been sold already. A time bomb of toxic proportions is ticking here.

GCL, located along the Mumbai-Thane border, began making sodium bichro-mate and potassium bichromate in 1941, supplying the army and some industries. It slowly got into other chromium chemicals -- chromic acid, chrome oxide green and basic chromi-um sulphate. Production increased to 15,000 tpd in 2003, when it suddenly stopped operations after six decades of making chromium products. One year later, a non-governmental organisation, Indian Centre for Human Rights and Law (ICHRL), visited the GCL site.

"The case of chromium contamina-tion by Hema Chemicals in Gujarat had already come up. We decided on a ran-dom visit to the GCL site," related P R Arun of ICHRL. "We met with retrenched workers there. Most had nasal septum lesions, indicating chromium poison-ing. Yellow-coloured water spewed out of a bore in the ground. We collected the sample and sent it to the central lab-oratory of Maharashtra Pollution Control Board for testing (MPCB). We also saw piles of chromium waste unsci-entifically stored inside the factory premises," he recalled.

The lab results dated December 1, 2004, were unambiguous: the levels of hexavalent chromium, a known car-cinogen, were 2.4 parts per million (ppm) -- 50 times higher than the per-missible limit for all chromium (mean-ing the total chromium levels would've been higher). ICHRL approached the Supreme Court Monitoring Committee on Hazardous Wastes, which directed MPCB to look into the matter. An MPCB team visited the site on December 21, 2004; it was told "the management has decid-ed to close down the operations permanently and construct a resi-dential complex".

The team also saw a "large quantity of solid/powdery materi-al... kept in the plastic bags... and lying in the open". The director (works) of the company agreed it was process waste. Another MPCB team surveyed the site on December 29. It found clinching evidence: a "huge dump in neigh-bouring area within the factory premises which approximately contains about 25,000 to 30,000 tonnes of chrome-bearing waste". All included, there was 60,000 tonnes of hazardous waste lying within the factory premises.

On January 4, 2005, MPCB fined GCL Rs 1,500 per tonne for the process waste. It ordered the company to not move out any waste from the factory except to a waste treatment facility at Taloja. It also demanded a plan for clean-ing up the groundwater. Informed sources say only about 4,500 tonnes of waste was taken to the Taloja plant for safe disposal. Where did the remaining 55,500 tonnes of toxic waste disappear?


This correspondent visited the GCL site on November 22, 2005. Security was tight and entry resticted, but the guards confirmed talk of building a residential complex. The factory is getting disman-tled and its scrap is being sold off. But they couldn't stop anybody from notic-ing the yellow-coloured water that flowed unhindered in the drain outside -- more than two years after the factory closed. Where was it coming from?

Residents of neighbouring areas have varying explanations, all pointing at GCL. Factory workers and local resi-dents confirmed the yellow waste was from the factory. M Niyaz Ahmad Ansari, resident of 30 years at a locality adjacent to the factory, recounted: "The factory had a kaccha bore in the ground into which it pumped all the hazardous waste. During summers we'd get yellow- coloured water in our borewell. The throat would burn after drinking that water; we'd throw up as a matter of course. It's better since the factory closed." There are many such stories. Each time a builder digs the ground nearby, out comes yellow water.

Sadhu Devrekar worked at GCL for 25 years. He claimed more than 50 workers died due to illness in the last two years of the factory's operations; another 175 developed lesions in the nasal septum. None of the 850 workers got full compensation, he complained. "Process waste used to be stored all over the factory. Some of it was clandestinely thrown into the creek. The soil of the factory grows no vegetation," he warned. The chromium-laced water has spread to nearby areas, affecting farm-ers, he feared.

How safe is it to build a residential complex in the locality, let alone on the factory site? The adjoining Lion Pencils Ltd factory has been sold to Thakur Estate Developer. Patches of chromium waste-laced water can be seen outside the upcoming Thakur complex.


Right behind the GCL factory, half the construction of Madhuban residential complex is complete. Several others are in the pipeline, oblivious of the fact that Mumbai faces a drinking water shortage. Media reports say MCGM will be able to supply water to new build-ings only in 2009. In all likelihood, people who move here will have to drink chromium-laced water. But at least the residential complex hasn't yet been finalised.


"We visited the site a few months ago. The likelihood of groundwa-ter and soil contamination from pesti-cides residue is very high. Hence we directed the company to get a compre-hensive study of the area done in terms of pesticide residues, both in groundwa-ter and soil," said a member of the MCGM committee, acknowledging most members of the committee are not com-petent enough to deal with pollution.

DTE contacted Sujata Tiwari of Oberoi Constructions to get details of the study. She promised all possible information, and then failed to reply till the time of going to press. M S Rao,chief engineer of MCGM's development plan department, replied to our queries: "There is a possibility of contamination, which has to be studied by the company. We have not heard from them so far." EIL has washed its hands off the contro-versy. Its spokesperson said they cannot provide any further details as they have sold off the site.