How about a long drive 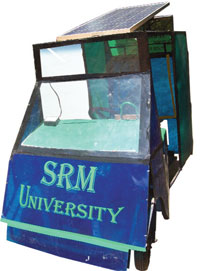 IT IS the star attraction on the campus of SRM University in Chennai. Though in a nascent stage, it has the potential to give solar car manufacturers like Reva and Venturi a run for their money. Its innovators, a team of 10 electrical engineering students in their final year and pre-final year, claim the car is highly energy efficient and could hit the market in a year.

The unique selling point of the model is its effective use of energy, possible from solar photovoltaic cells available today, said team leader Yogesh Wamborikar.

Most solar cars use AC (alternate current) motor because they are cheaper. But to convert the direct current from solar panels to alternate current, it requires an inverter. About 40 per cent of the power generated gets lost in the process. To check the loss, we experimented with brushless DC motor, a high power motor that uses direct current. And it moved the vehicle. 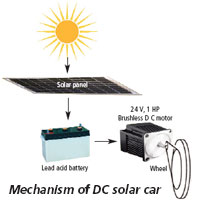 The solar panel captures sunlight and converts it to electrical energy, which is initially fed into a lead acid battery to ensure a continuous supply of electricity. Once the battery is charged, the power is used to run the motor. The motor shaft remains connected to the rear wheel through chain sprocket, which then drives the vehicle (see flow chart).

Unlike AC motor, DC motor has less speed constraints; the vehicle can run at a speed of 25-30 km per hour. “We have designed a controller with eight switches, which regulate the flow of current to the motor and control the speed of the vehicle,” Wamborikar said. For emergency, one can apply brakes in any gear. “Applying sudden brakes is not possible in AC motordriven solar cars. It can cause short circuits or catch fire due to back-flow of current,” he added.

The idea had been around for long, said S S Dash, head of the Electronic and Engineering Department at the university who was involved in the research. “It’s just that no one ever thought of implementing it.”

We have perfected the design of a three-wheeled, one-seater car that can bear a load of 270 kg. An AC solar car of the same capacity, under real condition, has the weight limit of 230 kg, Wamborikar said. The model has a 140- Watt multi-crystalline solar panel mounted on top. Made of silicon, the light-weight panel is capable of tapping diffused light and has 16 per cent conversion efficiency. The panel can be manually adjusted according to the sun’s direction. Wamborikar’s team is working on the design to make it autoadjustable using a solar tracker device.

The lead acid battery, which can run the vehicle for five hours without charging, serves as a backup at night or on cloudy days. If need be, the battery can be plugged into any electrical outlet and used to run the car, the team said. “All these give our car an edge over the AC motor-driven solar cars currently in use at the airports of New York and San Francisco in USA. They face constant interruption in service due to frequent battery change or recharging,” Wamborikar said. He claims a car made according to his design would cost Rs 4-5 lakh.

Both the scientific community and industry have greeted the car design. The World Congress on Engineering and Computer Science, a non-profit international association, recently invited Wamborikar to present a paper on the innovation at the annual conference held at University of California, Berkley, in USA. He was the youngest scientist there.