How is South Asia faring on energy?

A new publication on energy in the region raises critical questions 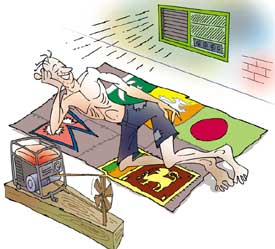 But do these figures really explain the energy situation in individual South Asian countries? Can figures for the region explain national predicaments? Questions such as these are often lost on international policy-makers. They would do well to look at a recent publication: Panos South Asia's, On the brink desperate energy pursuits in South Asia. The book doesn't address all facets of South Asia's energy problems -- that would be asking for a bit too much. But the issues raised in this monograph can't be ignored. So then, how do countries in South Asia fare on energy use?

But Bangladesh's energy policy is not just made up of simplistic assumptions. It also goes askew on priorities. Consider this: Bangladesh has sought the help of China and Australia to develop its modest coal reserves. This when the country has vast natural gas reserves. "Bangladesh hasn't got the means to tap its large natural gas reserves. So multinational companies are exploiting its resources. The situation isn't healthy and Bangladesh somehow has to find means to get out of the rut," says Sudha Mahalingam, an energy expert based in New Delhi.

30 per cent of Sri Lanka does not have access to electricity. Experts fear that a power crisis will hit the country soon. Sri Lanka's power sector is debilitated by excessive debts, pollution is rife and the cost of large fuel subsidies to the producers is passed on to consumers, who pay one of the highest electricity tariffs in the world. Private players who dominate Sri Lanka's power sector pay short shrift to environmental concerns.

The Ceylon Electricity Board (ceb), Sri Lanka's national power utility, has incurred losses over the past five years while consumers have had to live with constant power failures. In 2003-2004, the board's revenue losses amounted to Sri Lankan Rs 15 billion (around 6.5 billion Indian Rs). According to usaid South Asian Regional Initiative for Energy 2003, annual losses to the country's industrial sector as a result of power interruptions alone could be as high as us $81 million -- nearly one per cent of Sri Lanka's gdp. "Sri Lanka is hugely dependent on imported fuels. There are only a few hydropower facilities in the island nation, and oil-based electricity production has pushed up Sri Lanka's power costs," says Girish Sant of Prayas, a Pune-based ngo working on energy issues.

Sri Lankan authorities haven't ignored renewable energy but inefficient supply mechanisms militate against the alternatives working effectively. "Renewables can work wonders where rural electrification initiatives are considered. The outmoded theory that only fossil fuels hold the key to power supply has to be discarded," says Hemantha Withanage, head of the Centre for Environmental Justice.

The country's government, however, hasn't paid much heed to such appeals. According to the ceb's Generation Planning Report 2004, most future power generation in Sri Lanka will be based on fossil fuels.

There are immediate concerns as well. "A substantial chunk of Sri Lanka's gdp comes from tourism. But it's set to use diesel for energy security. The resultant pollution will surely drive away tourists," says Mahalingam.

With the annual demand for power increasing at a steady 8 per cent, successive governments have welcomed private sector investments, ignoring numerous complaints about the workings of a "private diesel mafia". Many of the critics are in fact from the country's energy sector. ceb's general manager Ranjit Fonseka, for example, has repeatedly berated the private players for polluting the environment. Other institutional heads have complained of having to bow down to pressure from private players, and have alleged that privately-owned diesel plant operators use nefarious means to raise tariffs. Fear of private sector monopoly reached new heights last year, when the government was compelled to promise fresh legislation prohibiting ceb privatisation, even by future governments.


In the mid-1970s, after the construction of a dam on the river Trishuli, Nepal's government decided to seek international assistance to develop hydropower. The power was meant for domestic consumption and for export to neighbouring India. The mega-projects did come up, but they did little to enhance national capacity. They were just too expensive. Anyhow by the 1980s, foreign aid completely dominated the power sector.

But thereafter, the sector has become much more pluralistic, supported by the Electricity Act of 1992. Over a dozen Nepali hydropower developers have cut into foreign domination. There has been much innovation and construction costs have come down substantially.

The country has also developed a number of mechanisms to let the benefits of hydropower development percolate to its rural population. Community-based rural electrification has been intoduced.


Bhutan's four hydropower projects have produced 440 mw over the past 25 years. This might not seem a big amount. But consider this: the country consumes about a quarter of the electricity it produces and exports the rest to India. Hydropower is Bhutan's single largest earner: it provides 40 per cent of the country's annual revenue.

Bhutan experience is educative on two counts: one, there is much to learn from the way this small country has managed risks even while executing mega projects many times its gdp. Two, Bhutan has shown how earnings from a natural resource sector can be used effectively without distorting other aspects of the economy. Many oil rich countries will do well to learn from this.

The country invested its earning from hydropower in high quality universal education and healthcare, developed infrastructure, and has provided electricity at low prices to industry and the domestic sector.


Pakistan has no energy policy, but the contours of a policy can be gleaned from two major official documents: a chapter in Energy Security in the Medium Term Development Framework 2005-10 and Pakistan's Alternate Energy Policy.

Pakistan's per capita energy supply is 0.30 metric tonnes of oil equivalent, less than one-fifth the world average. Its per capita consumption is only 14 million Btu. That the country is highly energy inefficient is evident from the fact that 31 million Btu is used to produce us $ 1 of gdp, compared to 6 Btu in Japan and the uk. Neighbouring India is marginally efficient: it requires 27 Btu to produce a gdp of us $1.

In 2003-2204, Pakistan's total energy consumption was 50.8 million tonnes of oil equivalent, of which nearly 80 per cent came from oil and gas. Oil constituted nearly 30 per cent, natural gas 50 per cent, coal 6.5 per cent, hydroelectricity 12.7 per cent, nuclear 0.8 per cent, and liquefied petroleum gas 0.4 per cent. Electricity generation is the largest consumer of natural gas. In 2003-04, it consumed 44.7 per cent, while general industry consumed 19.1 per cent and the fertiliser industry 18.4 per cent.

Rapidly increasing international oil prices have already put severe strains on Pakistan's economy. "The national utility is suffering from major financial losses. This is also reflected in the fact that rural electrification is much less than that of India," says Sant. So, the country needs to develop indigenous resources and economise energy use. So do most other countries in South Asia.