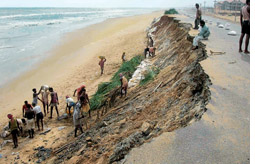 people living in Sipasarubali near the coast in Puri, Orissa, are under threat. Waves have swept away parts of a beach in this popular tourist spot. While local residents are perturbed and visitors are avoiding the shore, officials seem to be in denial.

The stretch of the coast affected by erosion runs for 5 km. Residents of Sipasarubali say the problem began with the construction of a 2.8-km road along the beach to develop the area. But as it became clear that the road and contiguous area were being eroded and protests snowballed, construction was halted after the completion of a 1.5-km stretch up to a little beyond Baliapanda.
Sand dunes, casuarinas and a rare grass, gudukanka, which blocked erosion, were destroyed when the road was constructed along the beach.

Residents of Sipasarubali allege the road was laid close to the sea to allow new constructions away from the sea. The beach falls under category two of the Coastal Regulation Zone (crz) notification of the Union Ministry of Environment and Forests which says: "Buildings shall be permitted only on the landward side of the existing road (or roads approved in the Coastal Zone Management Plan of the area) or on the landward side of existing authorized structures. Buildings permitted on the landward side of the existing and proposed roads/existing authorized structures shall be subject to the existing local Town and Country Planning Regulations". No seaward construction is allowed within 200 m of any existing road under the Environment Protection Act of 1986.

Jagannath Bastia, a member of the Coastal Zone Management Authority of the Union government, says the road was built to help private builders. He says there were protests against the construction because it would affect the sea and the people.

But Patnaik says crz norms were adhered to in the construction. Srikumar Sukla, a journalist in Puri, alleges politicians and bureaucrats are working in tandem with the district administration to help builders. Plans for construction had been approved well before the road was laid. He demands a cbi probe into the issue.

Scientists, however, point to a broader issue. Experts from the National Institute of Oceanography, Goa, and Institute of Oceanography Management, Anna University, Chennai, who have been studying the changing behaviour of the ocean in the region say the December 2004 tsunami could be a cause for erosion. Marine scientist Bijay Kumar Sahu, vice-chancellor of the Berhampur University, Orissa, agrees. "There is vibration in the sea even now. The east coast has experienced a series of cyclones during the past two years," he says. Sahu says local factors are also responsible for the erosion because damage to sand dunes and vegetation on the beach changes the character of the coastline.

Biswajit Mohanty, secretary of the ngo Wildlife Society of Orissa, points out another possible cause: the opening of a new mouth of Chilka lake in 2000. However, studies are needed to establish this link, he concedes.

Hoteliers at Puri are getting worried over a decreasing tourist inflow. J K Mohanty, chairman of the Hotel and Restaurant Association of Orissa attributes the crisis to negative publicity. He says it gives a wrong impression.