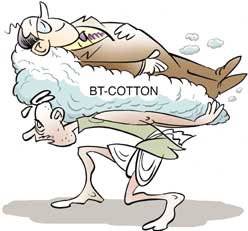 India has toppled the us to become the second largest producer of cotton, after China, states the cotton fiscal of 2006-2007. Statistics also show that by October-end, the annual cotton farmers' suicide-mark has crossed 1,000. But the why behind suicides--the non-increase of cotton procurement price--has still not been answered. And the new production boom coupled with burgeoning existing stocks, could crash the domestic cotton price and deepen the agrarian crisis further, while benefiting the textile industry only.

The cotton revolution brought about by the so-called pirated Bt cotton was developed in Gujarat. Down To Earth's investigations have earlier found that Navbharat-151, the miracle seeds, being widely grown across the northern and western states in India.The banned variety of Navbharat-151 and variants thereof has benefited the Gujarat farmers' income by Rs 5,000 crore, says J V Shah, former managing director, Gujarat State Seeds Corporation.

But such developments have happened where there is enough irrigation and where non-fake pirated Bt is available, for example, Gujarat, Punjab and Haryana. With 99 per cent of agricultural land irrigated in Punjab and Haryana and over 70 per cent irrigation in Gujarat, the states also have the right mix of conditions. Bt cotton requires at least three times more water than non-Bt cotton and the price of pirated and non-fake Bt is at least one-fourth, or even less than that of legal Bt cotton.

Vidarbha in Maharashtra is at a complete loss because despite having the maximum area (75 per cent) devoted to Bt cotton, coupled with fake seeds, it has the lowest area under irrigation, a meager 11 per cent of the total cotton area.

Pricing of cotton still remains an issue. While the agrarian crisis has a long decadal history, the suicides have increased in the last one year (see table Suicide trail). "The Vidarbha crisis cannot be overcome if the state government doesn't initiate its suspended monopoly procurement and increase the procurement prices," says Kishore Tiwari of Vidarbha Jan Andolan Samiti.

The state government stopped the monopoly procurement two years ago to overcome a Rs 5,000 crore loss. It is planning to revive partial procurement after debt restructuring. But the immediate solution, which lies in increasing the procurement price is not being considered by the government, says Vijay Jawandhia, a farmer leader from Wardha. The government had decreased the cotton procurement price from Rs 25 to Rs 17 per kg last year, which, it has increased marginally to Rs 19 this year. This is the prime reason for the increase in suicides, adds Jawandhia.

Cotton mill associations are happy with the bumper production of 270 million bales. "This will feed the increasing demand of the domestic cotton mills," says South India Cotton Mills association.

Cotton consumption by mills has increased by 9.28 per cent from 19.4 million bales in 2004-2005 to 21.3 million bales in 2005-2006 and is likely to increase by 22 per cent by this year-end. But this could spell disaster for the farmers as prices could reach a low of Rs 15 per kg. Private procurers can connive and manage manipulating procurement agencies, says Jawandhia.