India gets ready for banana war

A fungus that threatens popular Cavendish bananas traced in the country

IT’S yellow, sweet, large, uniformly sized and firmly textured. For almost everyone the Cavendish variety is the banana. But it was not so until the 1950s when a fungus knocked out its predecessor, Gros Michel, the sweetest variety known so far. The Cavendish, once a littleknown Vietnamese variety, successfully resisted the virus and became the most widely cultivated and traded banana across the world. But towards early 1990s, a virulent strain of the fungus emerged. Called Fusarium oxysporum f.sp. cubense, it has destroyed Cavendish plantations in major banana exporting countries in Asia, including China, The Philippines, Taiwan and Indonesia.

Their loss was India’s advantage. Estimates show India’s banana exports jumped by 80 per cent in the last fiscal year. Just as India was gearing up to broaden its export base, researchers have sounded alert: the fungus is affecting Cavendish bananas in the country. It is the same strain that had wiped out Gros Michel, scientists of the National Research Centre for Banana (NRCB) in Tiruchirapalli reported in the November issue of Plant Disease.

The soil-borne fungus enters the banana plant through its roots and works its way up into the stem and then the leaves and fruits. A vertical split occurs in the stem and leaves around it turn yellow and wilt, eventually killing the plant in a few months.

Banana growers in the Cumbum region of Tamil Nadu had been complaining of sporadic occurrences of the wilt disease for four years, said R Thangavelu, senior scientist at NRCB. Researchers from the institute recently surveyed the plantations and found F oxysporum is infecting the Cavendish. M M Mustaffa, director of NRCB, said since the infection was spotted in a small area it is unlikely to affect India’s Cavendish yield immediately. 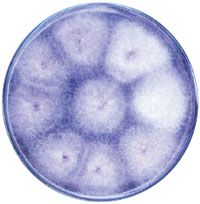 But not all buy his line. Chander Mohan, plant pathologist at Punjab Agricultural University, said it is difficult to contain the disease once it outbreaks. R K Jain, head of the plant pathology department at the Indian Agricultural Research Institute in New Delhi, said the fungus, resistant to fungicides, can spread through irrigation water. Any infection capable of killing one banana plant can wipe out the entire variety because banana lacks genetic diversity. Unlike most plants that rely on sexual reproduction and produce offspring with different genetic identity, bananas propagate by their corms and give rise to genetically identical plants, Jain added.

Thangavelu offered a solution. Farmers should be encouraged to cultivate Cavendish bananas and rice alternately, and plant fungus-resistant varieties. In case Cavendish dies out they can be brought to the forefront, he added.

He recently tested the virulence of the fungus isolated from Cumbum on a Cavendish variety, Grand Naine, and indigenous varieties of Ney Poovan, Karpuravalli, Rasthali, Poovan, Red Banana, Nendran and Monthan. He inoculated potted plants of the varieties with the Fusarium fungi. Red Banana and Nendran did not get infected, Thangavelu said. Growing such varieties would also help maintain a healthy balance of genetic diversity of bananas, he added.

Mohan suggests plant breeders can develop improved varieties by crossing the fungus-resistant varieties with Cavenidish. People should be encouraged to buy varieties of bananas to create market demand.

Growers who do not want the Cavendish to go the Gros Michel way, the scientists suggest, should buy uninfected corm from reliable sources or adopt tissue culture. The measures can, at least, protect the Cavendish for a few decades.