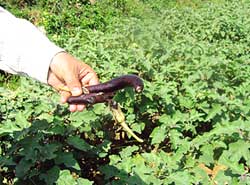 with the green light from the Genetic Engineering Approval Committee (geac), Bt brinjal -- a genetically modified (gm) food crop developed by the seed company Mahyco -- is ready for large-scale field trials and seed production. But the clearance is facing stiff resistance from farmers, environmentalists, and consumer groups across the country, who fear that gm food crops have major health risks.

A coalition of anti- gm groups has produced evidence and scientific validations suggesting potential health hazards relating to Bt brinjal. "We need to be extra cautious before going for such large-scale trials of gm food crops," says Rajesh Krishnan of Greenpeace. "Cry 1 Ac, the Bt toxin used in Bt brinjal, is a powerful immunising agent and actively binds to gut cells of mammals," says Kavitha Kuruganthi, spokesperson of the coalition. "While Cry toxins are known allergens, two other genes -- the aad marker and the npt-ii marker gene -- used in Bt brinjal are antibiotic-resistant. Besides, the cauliflower mosaic virus, used as a promoter (used to activate the Bt gene) in Bt brinjal, is also known to initiate transcriptional activity in human cells," she adds. There are fears that the promoter might reactivate dormant viruses and raise health concerns like cancer.

geac has taken notice of allegations raised by anti- gm groups and asked Mahyco to clarify certain safety concerns. The company is yet to come up with a proper explanation. But Mahyco refutes this. "Toxicological, nutritional and allergenicity studies in public sector institutions have found Bt brinjal absolutely safe. Studies also inform that when cooked the Cry 1 Ac protein degenerates rapidly making it safe for human consumption," says Sanjay Deshpande, spokesperson of Mahyco.

Bt brinjal has been developed in collaboration with a number of public sector institutions like the Indian Institute of Vegetable Research, Varanasi, Tamil Nadu Agriculture University, Coimbatore, University of Agricultural Sciences, Dharwad, Cornell University, usa, and the University of Philippines. "The genetic transformation in brinjal was achieved in 2000 and its biosafety was established by rigorous scientific studies and trials for more than five years," says Deshpande.

Bt brinjal, with its pest resistance capacity, will drastically bring down crop loss and thereby increase the brinjal yield in the country by 54 to 113 per cent, claims Mahyco.