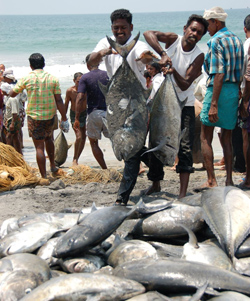 A new report released by non-profit Greenpeace contradicts India's official position that there is still scope for increasing fish catch. Around 90 per cent of India’s fish resources are at or above maximum sustainable levels of exploitation, says the report, released on Friday on occasion of World Oceans Day.

The report, Safeguard or Squander?, analyses the declining state of fisheries in India that impacts livelihood of over 15 million people.

The report says that the overexploitation is an outcome of destructive fishing techniques and overfishing resulting from bottom trawling and government subsidies for mechanised fishing. “Fisheries in India are at a tipping point and that doesn’t mean that only the coast would be affected. It has an overall impact on the social, economical and cultural set up of our country,” says Areeba Hamid, oceans campaigner at Greenpeace India.

Factors like rampant pollution through effluent discharge by industries and sewage from residential areas, destruction of breeding grounds, such as mangroves and estuarine areas, and hot water discharge from thermal power plants are further worsening the situation, she said.

With approximately two per cent contribution to the national GDP and over five per cent to agricultural GDP, the fishery sector has been one of the major contributors to foreign exchange earnings through exports.

The Greenpeace report, however, points out that the export of fish has been stagnating since the early 2000s. This further endangers the government’s plan to raise the present fish exports from over US$ 2.8 billion (2012-2011) to 6 billion by 2015.

“There has been a tremendous decline in fish species due to reckless fishing. The government should not allow foreign fishing vessels to enter the Indian territory as they are causing the maximum damage,” says T Peter, secretary of National Fishworkers’ Forum. Peter demands that the fishers should also be consulted during the decision making process.

“There is an urgent need for policy change and for that we have constituted a standing committee,” says Basudeb Acharia, chairperson of the Parliamentary Standing Committee on Agriculture, who released the report in Delhi. “We have suggested to the government to keep a check on foreign trawlers and also to take concrete steps in order to conserve depleting species like tuna.”