Whatever the poverty line, 50 per cent people in India will remain poor

Poverty is becoming hereditary in India, at least for a sizeable population. That is the conclusion derived from a three-decade tracking of poor households in rural India.

A survey by the Chronic Poverty Research Centre (CPRC), an international association of researchers and academicians, claims that those who are chronically poor may pass on poverty to their next generation. What’s more, people residing in tribal and forested areas are likely to remain poor forever, fomenting violent conflicts in future. Most of India’s forested districts are already dens of Naxalites.

The survey, India Chronic Poverty Report, comes at a time when the country is awaiting its latest National Sample Survey for estimation of poverty. On April 21, while unveiling the approach paper to the 12th Five Year Plan for 2012-17, the Planning Commission disclosed that poverty has reduced from 37.2 per cent in 2004-05 to 32 per cent in 2009-10. The estimate is critical for the next Plan and the eagerly awaited and much debated National Food Security Law.

The apex court’s observation came in the wake of a petition filed by non-profit People’s Union for Civil Liberties. The petitioner contends adequate foodgrains are not being given to people living below the poverty line. This case is known as the Right to Food. The court also challenged the commission’s estimates of BPL families. “There cannot be two Indias,” said the apex court while describing the country’s high economic growth and consistent poverty. “The poverty level is reducing but at a slow pace,” says Biraj Patnaik, principal adviser to the court’s commissioners for the case.

The survey by CPRC explains the “two Indias”. “Why do some people remain poor for a longer period of time? Why do poor areas remain poor forever? These are the questions answered by the survey,” says Aasha Kapur Mehta, professor of economics at the Indian Institute of Public Administration in Delhi, who leads CPRC in India.

The survey followed about 3,000 households for almost 30 years across the country. It adopted a three-pronged approach to poverty: what drives poverty, what retains poverty and what causes exit from poverty (see ‘Investigated: chronic poverty’). 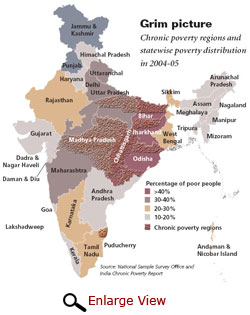 CPRC has published 32 research papers in the past five years explaining various aspects of poverty in India. It defines the chronic poor as people who remain poor through their lifetime. Analysis of the papers shows that at least 50 per cent of India’s poor are chronic poor. The survey identified 15 regions spread over six states where poverty is getting concentrated and chronic (see map). “Persistent backwardness and inequality have led to concentration of poverty in certain parts of India. So there is a geographical dimension to poverty,” says the CPRC report.

The count of very poor (with a consumption expenditure of Rs 9 per day per person) is an indicator of chronic poverty. Though the number of very poor is decreasing, the percentage is quite substantial. Their number was 115 million in 2004-05—37 per cent of the total poor. Their percentage of the very poor in the total population has declined in all states except Odisha, between 1983-94 and 2004-05. The percentage in Bihar, Madhya Pradesh, Maharashtra, Odisha, Tamil Nadu and Uttar Pradesh is higher than the all- India figure.

The report says, “In forest regions, the issues are not so much agronomic or natural conditions as poor people’s access to the resources that are there, their human capital endowment and the way they are incorporated into labour market.” The survey points out the poverty reduction among tribals is slow. Estimates for 1993-94 and 2004-05 indicate that against a decline in poverty for the entire population from about 37 per cent to 27 per cent, the decline among the rural tribal population was from 51.9 per cent to 47.3 per cent.

Why poverty becomes chronic According to the survey, there is inequality in the efforts made to prevent people from poverty and get them out of it. The numerous poverty alleviation programmes are inadequate and insufficient. Of the 29 such programmes studied in the survey, only nine could prevent people from falling into the poverty trap. Thirteen could enable escape from poverty and 16 could alleviate chronic poverty. Consequently, says Shashanka Bhide, a senior fellow of the National Council of Applied Economic Research, a significant proportion of non-poor households may fall into poverty while a large proportion of poor may not manage to escape it.

The report is a wake-up call. “Social conflict may find easy recruits among the chronically poor, who have less to lose by engaging in conflict and might be mobilised by the politics of grievance,” says the report. Anand Kumar, professor of sociology at Jawaharlal Nehru University in Delhi, says, “The report points to four major deficits the country is facing—development, legitimacy, governance and democracy. This created another crisis, time deficit.” He adds, “People are no longer willing to wait; there is a sense of urgency, suggesting the need for continued mass mobilisation and protests.”