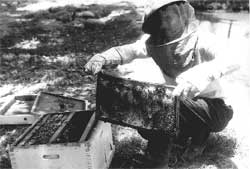 the European honey bee Apis mellifera was introduced in Australia by European settlers in 1822, prior to which, the Australian continent had no honey bees. Every bee-keeper knows that domesticated honey bees often issue swarms or abscond, establishing wild colonies. Since A mellifera is not native to Australia, there arise important questions about the survival of these colonies in the wild. And if they do, what might their impact be on the native bee fauna and the local ecosystem in general?

Such questions are now becoming particularly relevant in the Indian context because A mellifera is being introduced in many parts of the country in the hope of increasing honey production. Unfortunately, very few rigorous studies have been carried out to assess the consequences of such introductions to the local Indian honey bee fauna. Unlike Australia, India has at least three species of honey bees, A cerana , our own domesticated honey bee, A dorsata , the giant rock bee, and A florea , the Asian dwarf bee.

A recent study of population demography of wild A mellifera honey bees in Australia is therefore of great interest to our country. B P Oldroyd and colleagues at University of Sydney and La Trobe University undertook a three-year study of the population dynamics of wild honey bees in the Wyperfeld National Park in northwest Victoria. The study revealed that when honey bee colonies maintained for commercial purposes escape, they survive very well in the wild, even though A mellifera has had no evolutionary history of living in Australia. The wild colonies had high densities ranging from 40 to 148 colonies per sq km. Perhaps the most significant finding of this study is that the already-established wild populations are self-sustaining and do not require fresh escape of domestic bees into the wild ( Oecologia , Vol 111, pages 381-387).

The implications of these findings for India are obvious. Let us be aware that introduction of A mellifera in India for apiculture is very likely to cause irreversible establishment of permanent wild populations of European bees, with unpredictable consequences for our native honey bee fauna.