Is REC an albatross for power distribution utilities?

Only two states have achieved their renewable energy targets so far. Others scaled down their commitments

Since the launch of the scheme last year, the government is buoyant on the renewable energy certificate (REC) market to increase the capacity of the sector. But given that the scheme is market-based, it hinges on the fragile commitments by states to meet their renewable energy purchase obligation (RPO) target. Their failure to source the committed amount of energy from renewable sources would mean REC mechanism would be just another all-bark-and-no-bite scheme of the government.

While the first trading session in March this year showed some promise, with the trade of RECs hitting the ceiling price, the subsequent sessions cast doubts (see ‘Energy market glitch’, March 16-31, 2011). An official from the National Load Despatch Centre claims this fluctuation is likely because distribution companies, or discoms, feel they have a year to meet the RPO target. Nonetheless, project developers are upbeat and so far a substantive 597.4 MW is added under the REC mechanism.

What worries experts in the sector is the actual performance of states under the previous RPO regime under feed-in-tariff. As there was no financial liability imposed, only two states—Tamil Nadu and Karnataka—achieved their targets in 2009-10. With the launch of the REC market and consequent backdoor financial liability in case of default, many states scaled down their ambitions in 2010-11 to more realistic renewable energy additon goals.

As seen in the graphs, nine major states have sharply cut their obligations with the launch of REC mechanism. For example, Madhya Pradesh scaled down its RPO target by a staggering 92 per cent, Haryana by 85 per cent and Kerala by 40 per cent. The graph also shows that no scientific basis was applied for determination of earlier targets and the lack of seriousness by several states on meeting their obligation. Having revised their targets for 2010-11, an estimate on the current REC liability in monetary terms for non-solar projects is made with the government fixed floor price of Rs 1.5/kWh and ceiling price of Rs 3.9/kWh. 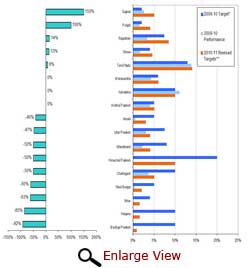 The National Action Plan for Climate Change (NAPCC) of 2009 set state electricity targets through renewable energy sources. As per the targets 5 per cent of the total electricity generation should be sourced from renewable energy projects from 2010-11. It should be increased by one per cent every year till it reaches 15 per cent in 2020. But the achievement was just 3.9 per cent in 2009-10. Even after the revision of RPO targets came in, the pan-India RPO does not add up to 6 per cent envisaged in the NAPCC for the year 2010-11.


The above table shows that about 10 million renewable energy certificates (RECs) are required for states to comply with their targets for 2010-11. This would be valued at Rs 1,618 crore at floor price and Rs 4,209 crore at the ceiling prices. Given the financial losses of discoms of the entire country at Rs 7,887 crore in 2007-08 (source: Deo Pramod et al, 2010) which continues to rise, the new added liability from REC is possibly going to be an albatross looming over them.

As the financial liability for discoms increases by a significant 20 per cent at a minimum due to the REC scheme, any lifelines by electricity regulators to discoms in the form of carry forward or further reduction in RPOs targets would severely hurt the investor confidence and consequently affect renewable energy uptake. In view of the above, Central and state governments need to be urged to uphold the policy stability under REC. The government first needs to make the non-compliance of RPOs strict. How the discoms will be able to pay off such huge amount still remains ambiguous.
Web Specials Web Specials Web Specials Tamil Nadu renewable energy … renewable energy … Renewable Energy Renewable Energy National Action Plan … Ministry of New and … Legislation Karnataka Energy Policy Energy Policy Energy Electricity Climate Change
SUPPORT US