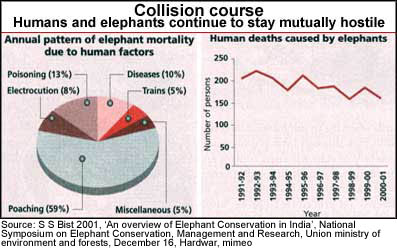 two incidents uncannily marked the commencement and conclusion of the 'National Symposium on Elephant Conservation, Management and Research'. On December 6, 2001, two tuskers were killed by poachers in Rajaji National Park, Uttaranchal. Then, on December 20, an elephant herd trampled four persons to death in West Bengal. The elephant conference at Hardwar in Uttaranchal was held from December 16-20.

It was inferred that:

l Only mammoth changes in regulations can enable peaceful co-existence

Against this backdrop, conservationists have recommended radical policy amendments. From allowing domestic trade and export of live elephants, to encouraging private ownership of pachyderms. The symposium also demanded an amendment to section 11 of the Wildlife Protection Act, 1972, which requires permission from the chief wildlife warden of the state to kill any animal protected by the Act.

The conference, significantly, has reaffirmed the need to keep people involved in the conservation effort. Excluding them from elephant corridors is not the route to reform, it avers. Fresh rules, it is felt, are also necessary to curb illegal trade being carried on in the garb of 'permits'.

The participants went so far as to hint at killing of rogue animals as an option in their final set of recommendations to control the menace of problematic elephants.

The Rajaji National Park killings and the earlier slaying of elephants at Corbett National Park in Uttaranchal (see box: Corbett killings: Arunachal link? ) set the tone for the symposium. It was, however, also a preparatory meet for the Indian stand on the forthcoming Conference of the Parties (cop) to the cites (Convention on International Trade in Endangered Species), to be held in Chile in November 2002. cites bans any kind of trade in animals listed in its Appendix i. The elephant was put on this list in 1975. The director and the steering committee of Project Elephant (pe), a Union ministry of environment and forests (mef) nodal programme for the conservation of elephants, used the symposium to discuss the stance to be taken in Chile.

Experts reiterated that poaching of male tuskers leads to highly skewed male to female ratios, and fragmentation of habitat sparks the human-elephant conflict.

In the first session, forest department (fd) representatives presented status reports on the condition of the elephant populations in their respective states. Among the northeast states, the situation in Assam was perceived to be the worst with large swathes of forests being reportedly felled. This put elephants on a collision course with humans. S K Pandey, inspector general of forests, warned that he would be forced to approach the Supreme Court if the situation did not improve. The northeast states had a common demand: a synchronised and standardised census. In the context of the northeast, S C Dey, member of pe's steering committee, said: "Conservation cannot be carried out by creating protected areas. People have to be part of the conservation strategy." S S Bist, director pe, pointed out that this held true for the entire country. "We realise that the idea of elephant reserves does not imply this and have renamed the first 11 demarcated areas (for elephant conservation) as elephant ranges instead. Our strategy must go beyond protected areas -- sanctuaries and national parks -- which make up for only 23 per cent of the elephant's habitat," he said.

Raman Sukumar, from the Indian Institute of Sciences, Bangalore, laid emphasis on evaluating the success of pe over the past 10 years. "Reduction in crop damage compensations and a simultaneous fall in the number of human as well as unnatural elephant deaths could be indicators of the pe's effectiveness." Experts pointed out that not only has the compensation amount risen, there is hardly any reduction in casualties (see box: Collision course ).

There was also a difference of opinion over the actual population of elephants in India, especially in southern states where figures did not seem to correlate well with the elephant growth rates. The pressure to perform might have caused some fd officials to overestimate the population, it was felt.

However, participants acknowledged that the pachyderm population was on the rise despite problems of poaching of male tuskers. Some delegates said that the provisions of the existing laws should be used to prevent local communities from gathering non-timber forest produce (ntfp) from protected areas that were elephant habitats. These ideas on elephant ecology were opposed, albeit in private.

Similar proposals about 'improving' elephant corridors were shot down by experts like D K Lahiri Chaudhry, member pe steering committee, as a miscomprehension of the purpose of corridors. He said, "They are supposed to serve as passageways. We need to ensure a 'no land-use change' policy instead of the expensive and impractical effort of purchasing corridors in order to secure them." Ironically, a pachyderm broke through the wall of the conference venue building, which falls in an 'elephant corridor' in Rajaji National Park.

It was pointed out that in the past 10 years only one corridor (the Kaniyanpura corridor connecting the eastern and western ghats) could be secured by outright purchase by the Delhi-based non-governmental organisation, Wildlife Trust of India. The corridor land was subsequently declared part of the Bandipur National Park in Karnataka. The meet recommended that by the end of 2006 at least five corridors be secured -- leaving the meaning of 'secure' open to interpretation.

It remains to be seen what India's final stand would be at the cites meeting and whether the recommendations -- bold by mef standards -- will be translated into action to ensure that humans and elephants live and let live.