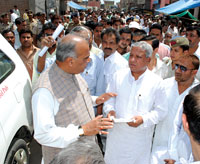 A COMMITTEE of Parliament visited the slaughterhouse in Meerut on June 10 to enquire if it was polluting the Kali Nadi river that flows through the city.

A seasonal river that once provided irrigation and drinking water to 44 villages in Meerut district of Uttar Pradesh, Kali Nadi has turned poisonous. The slaughterhouse waste is only a part of the problem. Industrial effluents and municipal sewage also flow in the river.

Members of the Public Petitions Committee of Parliament were told only 450 animals are slaughtered at the facility every day. The team lead by Congress MP Jagdambika Pal was told the effluent treatment plant was functional, though it does not have an electricity connection. But Meerut MP Rajender Aggarwal said the slaughterhouse is officially closed. Even then 5,000 animals are slaughtered there daily, he claimed.

The committee was set up after Lakshmi kant Bajpayee, former Uttar Pradesh minister, approached the Lok Sabha, alleging irregularities at the facility. The inspection has brought into focus the slow death of the river. The Kali Nadi (Eastern) contains toxic metals like lead and chromium, R C Chowdhary, regional officer of the state pollution control board, admitted. Meerut’s sewage flows into it untreated because the city does not have a treatment plant. The waste that indu strial units discharge into the river is treated and untreated effluents, he added.

The river has contaminated the groundwater along its banks. “The water from handpumps turns dark yellow if you keep it for a few minutes. It tastes like diesel,” said Om Prakash, a resident of Jalalpur, a village 4 km downstream of Meerut. He said the paper and sugar mills and the slaughterhouse in Meerut are polluting the river. Thirty families in the village of 2,000 have migrated due to pollution, he added. Further downstream, residents of Alipur village said officials collect water samples regularly but have done nothing about the pollution.

The Central Ground Water Board office in Lucknow had recommended in 2002 that handpumps and tubewells along the Kali Nadi be closed. People say they have no other source of drinking water. Sugar and paper mill managers insist they are not polluting the river. Navdeep Singh Virdi, manager of Nangamal Sugar Mill and Uday Sharma of Thitkary Paper Mills, said they reuse the waste water. But Raman Tyagi of non-profit NEER in Meerut said the effluent treatment plants in the mills are usually shut.