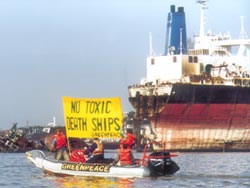 Thanks to an alert sounded by activists, the Indian authorities could take timely action to prevent dumping of toxic waste. Pressure group Greenpeace had raised an alarm about the Norwegian ship Hesperus -- to be breached at the Alang ship-breaking yard in Gujarat -- carrying hazardous waste in contravention of the Basel Convention. Parties to the pact cannot export hazardous waste to other member countries. Both India and Norway are signatories.

Following the alert, the Union ministries of environment and forests and surface transport swung into action and ordered the Gujarat Maritime Board not to breach the vessel. Scrapping old ships leads to the release of toxic material and engine oils into water, inflicting massive damage on the coastal ecology, the agricultural land in the vicinity as well as on the people engaged in the exercise.

Ship recycling is a lucrative business in Gujarat and Maharashtra. Of the 90 per cent of discarded western ships, which set sail for scrapping yards in countries like India, Bangladesh and Pakistan, at least 60 per cent are said to end up along Indian shores.