Kerala writes to Tamil Nadu over chemical contamination of vegetables

The state requires 30 lakh tonne of vegetables every year and produces only 40 per cent of its requirements, thus importing the rest from neighbours 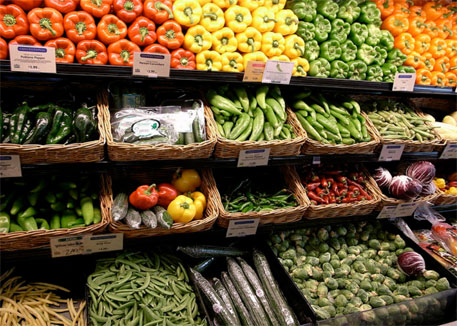 The Kerala government has sent an official letter to its counterpart in Tamil Nadu, informing that vegetables bought from the latter contained pesticide residues three to five times higher than the permissible limit.

A team of Kerala food safety officials recently paid a visit to farmlands in nine districts of Tamil Nadu. This was in the wake of a campaign launched by the state against the sale of vegetables with high pesticides content imported from neighbouring states. The drive has come at a time when the country is still reeling under the Maggi controversy and food safety is uppermost on everyone’s mind.

Earlier, a meeting was convened by Kerala Chief Minister Oommen Chandy on June 10 to check the import of vegetables high in pesticides content into the state. Anupama said an inter-state secretary-level meeting had been planned next month to discuss the matter.

According to the state-owned vegetable procurement agency, Kerala Horticultural Products Development Corporation (Horticorp), the state requires 30 lakh tonne of vegetables every year.
However, Kerala produces only 40 per cent of its requirements and imports the rest from neighbouring states. In the past too, there have been several reports by the media on the indiscriminate use of pesticides in vegetables grown in Tamil Nadu.

Last year in November, Chandy had said that Kerala would soon form an authority under the food safety commissioner to check fruits and vegetables entering the domestic market from outside to check contamination. But till date, the authority has not yet been formed.

In 2008, Kerala had formulated an organic policy “for making farming sustainable, rewarding and competitive and ensuring poison-free water, soil and food for every citizen”.

At present, with increasing awareness among consumers about the harmful effects of pesticides, there is a high demand for organically-cultivated produce. “Therefore, it has become the solemn responsibility of the government to encourage organic farming to ensure poison-free food at affordable prices to every citizen,” the government policy reads. However, the policy has not been implemented. Even the vegetables produced in the state are contaminated with pesticides.

In the past couple of years, an organic vegetable movement has slowly spread in the state. Many people have also started growing vegetables on the terrace. Political parties are also not far behind. The Communist Party of India (Marxist) has taken it upon itself to popularise organic vegetable farming.

Interestingly, at a time when Kerala is making such a hue and cry about chemical contamination of vegetables, it is wasting jackfruits which grow in abundance in the state.

The benefit of cultivating jackfruit is immense, as chemicals are not required to grow it. According to the National Horticulture Board, the state’s production of jackfruit in 2013-14 stood at 300,000 tonne.

However, there is a glitch in the story. “At least, one-third of this (jackfruit produce) is allowed to rot in the open. Besides this, around 50,000 tonne of jackfruit is going out of the state to cities such as New Delhi, said Shree Padre, a well-known journalist and editor of Adike Patrike, a farm journal in Kannada. Padre has been writing on jackfruit for the past seven years.

“The fruit is highly nutritious and is a staple in the state,” Padre added. Padre wondered as to why Kerela was not paying any attention to minimise the wastage. The state still continues to consider jackfruit a poor man’s food, he rued.

K Pratapan, the state horticulture mission director, said Kerala does not have any separate funds or programme to promote jackfruit.