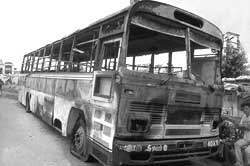 on december 19, 2001, a Delhi Transport Corporation (dtc) bus running on compressed natural gas (cng) caught fire at a filling station. A leakage was said to be the cause of the blaze. This was one of the eight incidents that have occurred in Delhi during the past six months.

An internal study conducted by the dtc on the performance of cng buses lays the blame on the Capital's pot-holed roads which lead to weakening of the joints of the vehicle's piping system. This results in frequent gas leaks. "With the cng tanks located below the chassis, the gas gets trapped at the bottom causing the fire," surmises the report.

Delhi Fluid System Components Pvt Ltd, a New Delhi-based company that distributes and supplies high-pressure cng tubing and fittings of the us brand Swagelok, claims that defective parts used in new cng buses could be responsible for the fires.

Tests carried out by the company detected leaks in both Telco and Ashok Leyland cng buses.

Ashok Leyland officials claim that these are gimmicks to sell a particular brand of products. "We have been plying our buses for over five years in Mumbai and nothing has happened," they contend.

While Telco has refused to comment on the issue, dtc chairman-cum-managing director Rakesh Mehta has conceded that leaks were detected in most of the buses tested. However, he could not pinpoint the cause.

Indian manufacturers are said to be using inferior quality variants of two-ferrule fitting (the component used worldwide). This leads to leaks that are plugged with teflon tape, known to give way when the vehicle is subjected to vibrations and jerks.

It took a few accidents for the Bureau of Indian Standards sub-committee on safety to convene its meetings. Susequently, seven codes have been drafted on the safety aspect, but the panel has not notified any of them. The Automotive Research Association of India (arai) too has issued two codes of practice and installation.