The editorial “Lessons from Kakarapalli” (September 1-15, 2011) is a wake-up call for industries eyeing land and other resources of poor people.

It is the people who survive on marshland or seasonal water bodies that suffer due to the aggressive development programmes of the government. A 60-hectare lake in Fazilka town of Punjab’s Firozpur district was once a flourishing water body that attracted several species of migratory birds. The horseshoe-shaped lake of Badha received water as recharge from the Satluj. As per the municipal record of 1919, the lake is a landmark water body of the region. But the ill-conceived Indus Water Treaty of 1960 sealed its fate, and now the lake is no more. The birds, fish and the people that were once dependent on the lake have abandoned their homes.

Encroachers, in the form of government-instituted agencies for fair development, are now trying hard to grab that land. They have, in fact, manipulated land records to show Badha Lake as barren land. Even if the people resist the takeover, their voices will be crushed since they belong to the lower section of society and the developers will have the last laugh.

This refers to the cover story “Deafening noise” (September 16-30, 2011). The problem is that no ministry or public authority is looking proactively at reducing noise levels by putting up sound barriers around highways and railway lines.

I live in Borivali, Mumbai, near the Western Express Highway. A number of high-rise apartment blocks have been built alongside this extremely noisy highway, and all the flats facing the highway, right up to the 40th floor, are constantly bombarded with a steady roar of traffic noise. We recently considered buying a house on the 18th floor but later decided against it as we could not stand the noise, even at a distance of over a kilometre from the highway.

I live in Himachal Pradesh. We call our state “Devbhumi”. Here one can find many temples and on the top of every temple one can notice a loudspeaker. The loudspeaker is meant to “torture” people by playing bhajans (religious songs) at full volume.

During the navratra season, jagrans (night-long recitation of devotional songs) continue for nine days. Devotional singers keep singing bhajans that are based on popular Bollywood songs at full pitch.

If someone objects to this violation of law, he or she is accused of hurting people’s religious sentiments.

Hope through your article people will understand the menace called noise pollution. 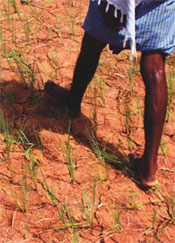 This refers to “Acquisition made easy” (June 16-30, 2011). While we continually sculpt land acquisition laws, we need to examine the larger choices India is making. Taking a sufficiently long-term view, biodiversity conservationists and tribal rights activists are battling the same foe: growth of cities on pockets of land that are rapidly shrinking.

The psychological obsession with GDP growth coupled with a runaway population growth points towards only one future where questions of conservation and social justice will become even more of an inconvenience to the government than they already are. Has not implementation always been a larger problem than the existence of laws?

This refers to “Sell stevia, face legal action” (September 1-15, 2011). Stevia is a natural sweetener for diabetics and patients of phenylketonuria (genetic disorder). It is non-fermentative and flavour-enhancing.

People of Paraguay have been using stevia for hundreds of years while, China has been using the sweetener commercially for the past two decades. None of them has reported any harmful side-effect—the human body metabolises the sweetening agents of stevia just like any other glycoside. The national health inspection authorities in China have approved stevia as a food additive, and in Australia, it is listed as therapeutic goods. In 2004, the Joint Expert Committee on Food Additives of the World Health Organization allowed using stevia as a food additive. Despite extensive use of stevia, why has the Food Safety and Standards Authority of India banned it? It must provide a scientific basis for notifying that stevia is not a food item.

The decision of the Food Safety and Standards Authority of India is questionable. The authority should give a sound scientific reason for the order as many people in India are engaged in cultivation of stevia.

This refers to “The idea of corruption” (September 1-15, 2011). Unless one knows or defines corruption, how will one be able to abolish it. Even those who say they fight corruption follow corrupt practices.

We have to fight for justice for the poor, the orphans, the differentially abled and the forgotten victims of many tragedies, like riots and bomb blasts. Some people even use children in agitations. Is this not a form of corruption? What’s more, many people use agitation for their vested interests.

We need a drastic change in attitude to fight corruption.

This refers to “Hidden industry hand” (September 1-15, 2011). Noncommunicable diseases are a threat to people around the world. Instead of drafting new policies, why can’t the UN simply promote yoga and ayurvedic medicines? It will be an effective, economical and feasible solution.

This refers to the editorial “A monsoon warning” (September 16-30, 2011). Storm water drainage system in Delhi was designed for a rainfall intensity of 44 mm per hour lasting two hours. This means if it rains for two hours at the above mentioned intensity the major drains will receive the rainwater runoff, keeping the roads clear of rainwater. But this never happens.

Reason: internal drains are either not desilted to restore their cross section or are deficient because of increased runoff due to overconcretisation of roads and excessive urbanisation. If the existing network of drains is effectively desilted there is hardly any reason for roads getting inundated. Moreover, it is necessary to provide well designed storm water pumping stations near underpasses. Even on the either sides of flyovers one can see accumulation of rainwater runoff during the rainy season. There is an imperative need to review existing arrangements and to bridge the gap wherever needed. This will save the city of avoidable hardship and criticism.

One of the main reasons for water-logging in Delhi in September was the unplanned construction during Commonwealth Games 2010. The municipal department had removed all the old stone curbs adjacent to roads and built 0.30-metre-high cement curbs on both sides of roads. This design is sheer wastage of public money. The rain drain pipe they had constructed were blocked by silt. The problem can be solved by constructing brick-paved streets on both sides of roads like the British did when they were ruling India.

The authorities should not elevate curbs or fill soil in the centre divider. The divider should be lower than the road surface. Rounabouts should not be elevated. Instead, they should be lowered and used for rainwater harvesting system. The horticulture belt adjacent to roads should be equal to the road level. The design of the road should be such that rainwater is collected wherever it falls.

Nullahs, drains and catchment areas have been replaced by stadiums, housing colonies or some other money-making encroachments. Hopefully, deluges will wash away the filth that has permeated our country. 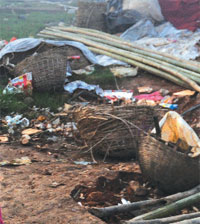 The issue of conservation of wetlands in Guwahati depends on pillars of ecology, economy and society (‘Who messed it up?’, September 1-15, 2011). Most of the present conservation actions include ecological and social programmes. But without proper weighing of all the pillars, a sustainable solution to reviving wetlands is meaningless.

The presentation of cover story “Maize Mania” (August 1-15, 2011) was clear and well conceived. A graph in the story shows 1993-94 onwards, the yield per hectare of maize ranged from two to 2.5 tonnes and there is the potential to increase the yield to five tonnes per hectare. Countries like China are already producing in excess of five tonnes per hectare. As per my observation, for every kilogramme of maize, three kilogrammes of biomass is produced. Therefore, for 8.9 tonnes of crop per hectare, more than 25 tonnes of biomass is produced.

This enormous amount of hay and plant waste can be used to feed cattle and farm animals, and to improve the soil fertility with compost as farmyard manure. Developing countries can look forward to this advantage.

The incident in Pune indicates that government is not sensitive to the basic rights of the people to divert water reserved for irrigation purposes (‘Farmers face police wrath, 3 killed’, September 1-15, 2011). Unfortunately, laws and acts relating to irrigation deal only with the use of water for irrigation, navigation and drainage and do not cover switching of use to drinking.

Drinking water supply should be given the highest priority while considering a water resources project. In the case of Pavana dam, farmers were deprived of water needed for livelihood. There is dire need to find a way so that both the people and government are able to get what they want.