What can one expect from the government that presided over the Bhopal gas tragedy without offering much relief for a quarter century (‘The Bhopal legacy: reworking corporate liability’, June 16-30, 2010)? I wonder why no one in the government thought of decontaminating the pesticide factory and awarding compensation to the victims soon after the incident in December 1984. That would have saved some of the 27,000 people who died from gas-related diseases in the subsequent months. The Government of India and the judiciary are as culpable as Warren Anderson and other officials of the Union Carbide for the mass suffering.

Why was Warren Anderson, who was the chairperson of Union Carbide at the time of the gas tragedy, allowed to leave Bhopal after the incident? It will not be wrong to equate him with the Nazis who killed millions of Jews in gas chambers.

Look at the language the US President Barack Obama used against British Petroleum (BP) after the Gulf oil spill even though only 11 people died in the accident. And see the language used by the Indian government for the Bhopal gas tragedy where 2,500 people died overnight and more than 100,000 were maimed.

People’s anger towards the government over the Bhopal judgement is understandable. Will the government accept its failure in delivering justice to the victims, which, of course, started during the regime of former prime minister Rajiv Gandhi? Arjun Singh is just being made a scapegoat.

The court verdict in the Bhopal gas tragedy was a crime and a travesty of justice. It has shaken people’s faith in the judiciary. It will encourage corporates to play with the lives of people.

Keshub Mahindra ought to have known that Union Carbide India Limited (UCIL) was dealing in hazardous chemicals for making pesticides before he became the non-executive chairman of the company. Therefore, his statement that he merely attended the board meetings for a paltry Rs 250 per sitting does not hold water. Some corporate lobbyists have argued Mahindra had no residence or business activities in or around Bhopal, so he should not be held responsible. Was Osama bin Laden in New York at the time of 9/11? How can anyone believe that the former UCIL chairperson had no knowledge of the presence of any lethal chemicals in the factory? The case of Bhopal gas tragedy was indeed treated like a motor accident.

The judiciary failed to book Mahindra under Section 304(II) of the Indian Penal Code (punishment for culpable homicide) due to his political clout, financial power and good liaison work by his corporate office. The Supreme Court should initiate a suo motu action against him. The industry associations and chambers of commerce are all distancing themselves from this manmade disaster which can be termed as the most cruel genocide in history.

Had this happened in any other country, all the accused would have been sentenced to death or given harsh jail terms. If the media could open doors of justice for Ruchika, Jessica Lal and Rizwanur Rehman, it should not fail in this case where 25,000 people were killed and tens of thousands are still suffering.

I liked the new look of your website www.downtoearth.org.in. In response to the editorial on Bhopal gas tragedy, Dow Chemicals should have been made to compensate the Bhopal gas victims in the manner it would have for a similar tragedy in the US.

It is a shame that the worst industrial disaster took place in the world’s biggest democracy. Even after more than 25 years, our leaders are busy in cover-up operations in the name of clean-up.

People blame the US for its double standards in dealing with the Bhopal gas tragedy caused by Indian subsidiary of the American company Union Carbide and the Gulf oil spill caused by BP. But US President Obama’s different approaches show how sensitive he is about matters relating to his own people who died on the drilling rig or are affected by the oil spill. His statement, “whose ass to kick in BP”, shows he is ready to step beyond the law. The Indian government (particularly the Congress) bows to the wishes of the US government over the deaths of tens of thousands of people.

The government punished Union Carbide officials and people are deman - ding the extradition of Warren Anderson because of the massive casualties in the Bhopal gas tragedy. What about the owners of private factories where workers die due to poor safety measures? Are they not accountable? No industry should function at the cost of human life.

Use of toilet paper, particularly in western countries, is leading to a decline in forest cover. It is time to shift to water ablution as practised in southern Asia. The practice is cleaner and hygienic and also eliminates the use of toilet paper. Toilet paper manufacturers’ will oppose the move, but then, every change has been resisted.

Negotiations on how to reduce greenhouse gas emissions after the Kyoto Protocol expires in 2012 have failed repeatedly. The reason is that the highlevel talks are organized in air-conditioned rooms.

Let the negotiation venue shift to open areas in low-lying islets of the Maldives, the sinking S underban delta in India or the flooded coastal areas of Bangladesh, which face dire consequences of climate change. These regions are not only home to rare species, they host the maximum number of climate refugees. Then only representatives of industrialized countries, who are repeatedly blocking the negotiation process, would realize the consequences of their actions. 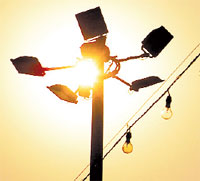 Right technology is the key

The rush by industrialists to participate in the Jawaharlal Nehru National Solar Mission that aims to produce 22,000 MW by 2022 is a welcome step (‘New gold rush’, June 1-15, 2010). Its success will depend on using or funding the right technology. India should also promote technological innovations in developing solar-powered appliances, such as pump sets, street lights and washing machines. Architects should be given incentives to design solar powered buildings. This would drastically reduce the load on the grid.

Why do we need to iron clothes? Just folding the clothes neatly straightens the creases. This is not only good for the cloth but helps save energy. By using old (not worn-out) clothes we can also save on raw material.

While fighting for justice with the government and industrial giants, no one bothered to appreciate those who made the lives of Bhopal gas tragedy victims bearable. No one remembers the youngsters who took the responsibility of delivering letters and messages in the gas-affected area; the auto-rickshaw drivers, government employees and common people who served the people suffering from toxic gas-related diseases; and the doctors, medical students and paramedics who treated the patients. These real heroes did not get the media attention they deserved.

Industrial disasters are no acts of god and so, disaster liability must be linked to accountability to give meaning to the right to life guaranteed by the Constitution. Disaster management can become effective only if prevention and mitigation are made a part of risk management liability. We have the Factories Act of 1948 under which the government has certain responsibilities besides the occupier and operator of the factory. The laws provide district officials with ample powers to inspect and take preventive actions.

But even now we are talking of liability for relief and rehabilitation rather than liability for risk management. We must remember that the goal of disaster management should be zero tolerance and prevention rather than just response and relief. The Environment (Protection) Act of 1986 and the rules on hazardous chemicals, hazardous waste, and emergency response talk of authorization, consent and planning for disaster response. None provide for liability of risk control or management.

The proposed Civil Liability for Nuclear Damage Bill must be preventive in approach, not curative. Consultants offering risk management services, and impact and vulnerability assessments should also be made liable.

Moreover, the tools of assessment, planning and monitoring have to be evolved and standardized to determine accountability.