Subsidy for a select few

Rising input costs of farming, including costlier labour, is well explained in the editorial ‘From where our food will come’ (August 16-31, 2010). Most of the foodgrains are produced using high yielding seeds that require more fertilisers and pesticides, and advanced agricultural practices. These farmers enjoy high subsidy on irrigation water, fertilisers and electricity.

Unfortunately, farmers in rainfed areas cannot avail of these subsidies in absence of irrigation facilities. They do not use high yielding seeds either. They require less fertilisers and pesticides, coupled with cheap labour. Scientifically approved watershed practices can ensure that wells and tube wells yield sufficient water. Programmes with large funds can be dovetailed with watershed projects. The need is to have participatory land and water management plans for each village. Developing eco-watersheds will ensure a good yield of water, a prolonged retention of soil moisture, recycling of nutrients and boost to soil fertility. This will cut input costs.

The present public distribution system (PDS) is also inefficient and costly. Therefore, in rainfed areas, PDS must be decentralised at the block level itself. Local procurement and distribution through grassroots-level institutions can prove efficient and cheaper.

Developing nations are demanding that developed nations cut their energy consumption drastically with guaranteed results. But developing countries are not playing their role effectively (‘According to USA’, January 1-15, 2010). An enormous amount of money is being spent on widening roads and building flyovers. Then the government says it does not have money for rehabilitating people living in slums.

All roads 10 metres wide should have a bus rapid transit system. If private vehicles get stuck in traffic jams, they will start using public transport. Bus services must be introduced to railway stations and airports.

Air-conditioners are one of the biggest energy guzzlers. In Mumbai, of the total power demand of 2,700 MW, 1,000 MW or almost 40 per cent comes from air-conditioning alone. To reduce this demand, a few steps could be taken: 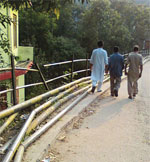 Parking woes and traffic congestion are not limited to the metros (‘Unlock the grid’, August 16-31, 2010). The rot is creeping into towns as well. My husband and I travel by public transport in spite of drawbacks in the service, but it hardly makes a difference.

Pedestrians, two-wheelers and fourwheelers jostle for space. The stretch of NH5 between Vijayawada and Gannavaram in Andhra Pradesh is dotted with automobile showrooms, tempting people to adopt an American lifestyle. We know of America’s lopsided transport system of having roads and private vehicles while shopping for oil around the world. What they did right was to build roads before bringing in cars. But India did the opposite. It brought in cars first with the belief that the roads will follow.

The administration needs to look into road management too. Traffic chaos develops even in smaller towns where the vehicle density is low vis-a-vis its population. The reason: the roads are usurped by other agencies, obstructing the traffic. For example, roadside shop owners make temporary extensions on the busy highways to showcase their fares. Footpaths constructed for the pedestrians are used by government agencies like the telephone, electricity and water departments, to lay pipes, thus forcing pedestrians to walk on roads. This too causes road congestion. Planting trees along the roadside is thoughtless. Trees grow to great heights and during storms and heavy rains their branches tear away and fall, causing accidents and roadblocks.


Why only the tiger?

Why of all the animals we wish to save the bravest (tiger) and the most beautiful (peacock) only? Why do we forget the sheep, goat, fish or other animals slaughtered, fried, boiled to satisfy man’s palate? Conservation of birds and animals should not be selective but serve to preserve nature’s equilibrium. Primitive man hunting for animals is understandable because it was a question of survival, but not modern man who has alternatives.

Vedanta Resources chairman Anil Agarwal should be termed a corporate criminal. The company has gained power by bribing the babus (‘Vedanta and lessons in conservation’, September 1-15, 2010).

Denying permission for bauxite mining is not enough punishment for violation of tribal rights. He should be put behind bars like any other criminal. Union environment and forests minister Jairam Ramesh has not done enough. Unless the corporates are tried for criminal violation, they will try to gain a back-door entry.

Just wait and watch how Vedanta destroys Niyamgiri hills with the tacit help of bureaucrats.

The editorial shows how companies like Vedanta are exploiting the developing countries. It is the repeat of the East India company exploits. Another multinational company Lafarge has plundered natural resources of India to feed its cement plant in Bangladesh.

I have witnessed the pollution of Hussain Sagar Lake, once a beautiful spot, since 1999 when I entered the twin cities of Hyderabad and Secunderabad to study masters in geophysics. The arti- cle ‘Hussain sagar goes to toxic waste’ (August 16-31, 2010) talks about pollution of surface water. But what about the quality of the groundwater and its consequences? In 1995, Andhra Pradesh pollution control board organised a workshop to find a solution to the problem. I had presented a paper offering strategies to map the impact of the pollution on the surrounding areas. But not much progress was made in that direction.

Dengue has attracted the concerns of the health ministry and other agencies responsible for checking the threat. The authorities are spending money only on issuing do’s and don’ts to the masses, thereby finding a way out to save their skin. There is filth everywhere, be it a slum or a high-end residential colony. Not to forget the open nullahs carrying household discharge to nearby rivers. All these are breeding ground epidemic viruses.

In the absence of details it would be risky to make sweeping statements but I am concerned about the effects of the pentavalent vaccine (DPT+HiB+Hepatitis B) on children (‘Officials push five-in-one vaccine’, July 16-31, 2010). A vaccine can have adverse reactions in two conditions—either the vaccine is faulty or it is administered wrongly. Vaccine promoters generally blame the delivery system for failures and adverse reactions.

Since any vaccine can give rise to adverse reactions, the vaccinators have to take precautions. The point of precautionary principle is to avoid repercussions. It is true that several studies show the beneficial effect of the HiB vaccine but I have not seen a study that shows the duration of immunity in children.

After the vaccination experience in Sri Lanka and Bhutan, it would be unpardonable if our government adopts the pentavalent vaccine for universal immunisation in a hurry.