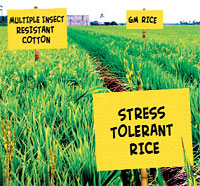 The article “Taking on industry’s risks” (April 16-30, 2011) tends to give distorted view of facts based on an informal discussion with M K Bhan, secretary, Department of Biotechnology (DBT), and myself. Rather than a reaction, it is important that the issues be understood in a wholesome manner.

There is a clear government policy to encourage public-private partnership (PPP). In the emerging areas such as biotechnology the success rate of new product development is low; public sector institutions have scientific ability and creativity, and industry has expertise in product development, in making end products and ensuring regulatory compliance and diffusion.

In health-related biotechnology it is common for public institutions to transfer output of their science to industry for product development through technology transfer or PPP. Public sector research usually results in leads and candidates but not final products. The products are made by industry into formulations that are appropriate for commercial use. The small and medium companies are the most creative in the biotechnology sector but lack resources. DBT is catalysing innovation in both public institutions and small and medium enterprises. In the agri-biotech sector, on the other hand, it is possible and required for public-funded institutions to develop crop varieties and hybrids on their own.

DBT works closely with the Indian Council of Agricultural Research and state agriculture universities and funds them. The department has set up an organisation to provide translational services to public-funded institutions for the agriculture sector at a modest cost. Very few companies in the sector carry out scientific research. It is important to encourage them. But our main focus in agriculture is on public sector.

The article says Dr Bhan has no faith in public sector. This is an unfortunate way to describe someone who has contributed products to primary health care programmes through his work at All India Institute of Medical Sciences and demonstrated the potential of public sector for public health.

This article was not about the entire spectrum of activities of DBT which is undoubtedly of immense benefit to the biotech industry. No single article can hope to cover all aspects of an organisation’s functioning. Our article was focused specifically on DBT’s Biotechnology Industry Partnership Programme (BIPP), which we saw as a promising new initiative to bring industry into the research fold. Apart from the opinions expressed by you and Dr Bhan, the article carried the views of almost all the companies that are part of the programme, and all of whom found the scheme useful. We cannot understand your defensiveness about PPPs which, after all, is the official policy on biotechnology. The PPP concept is predicated on a simple assumption: the public sector cannot accomplish many things on its own. Dr Bhan, we presume, was only reflecting the government’s policy, when he made the statement to us on the inability of the public sector to do things on its own. It was in no way intended to undermine Dr Bhan’s many accomplishments, specially in the field of paediatric healthcare. If you could point out the inaccuracies which you say tend to give slanted and distorted view of the facts, we would be happy to rectify them.

The article “Price tag for tendu, bamboo” (May 1-15, 2011) discusses an issue that can impact a large section of society living below the poverty line. Unlike Himachal Pradesh, Punjab, Jammu and Kashmir and Uttarakhand where minor forest produce only supplements the income of farmers and provides them part-time vocation, in some states it is the sole means of sustenance.

I, a founder-member of non-profit Sarv Hitkari Paryavaran Manch, faced a tough time fixing price of pattals (plates) made of Bauhinia vahlii (kachnar). I counted the pattals made from one day’s pluckings by a person. If one has put more than the usual eight hours in plucking the leaves, he or she earns more. Suppose a person puts 12 hours, he gets two days’ wages at the minimum wage rate fixed by the state government (Rs 110 in my case). Thus the person was paid Rs 220 for a 12-hour job, which made 600 pattals. Add Rs 10 per day for insurance cover; Rs 20 in this case because of the extra hours. Thus the cost of a bundle of 100 pattals was Rs 40. The price was just based on the labour input. No value was charged for the bounty of nature, the leaves. 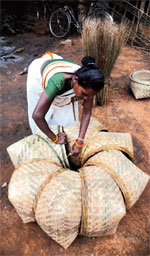 Making bamboo a minor forest produce is like opening a Pandora’s box (‘Freeing bamboo from the state’, April 16-30, 2011). Allowing its harvest and sale will result in competition between the retail market and right holders, resulting in exhaustive use of bamboo.
Mining lease holders in Karnataka misuse and overexploit iron ore. Who will protect bamboo if it suffers the same fate? Can gram sabhas control harvest of bamboo, like restriction of harvest during recruitment of new culms for nearly three to four months? Can bamboo tolerate excessive harvest by right holders? 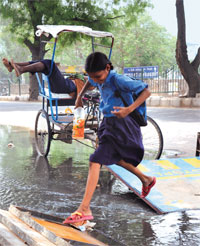 Numerous studies have shown that a plant-based, whole-foods diet not only protects people from osteoporosis, cancer, obesity and diabetes, it also helps reverse the conditions in many cases (‘Osteoporosis connection’, March 1-15, 2011). Modern lifestyle and dietary choices are largely responsible for the steep rise in chronic diseases. People should be educated to adopt and strictly adhere to healthy lifestyles to achieve long-lasting health benefits.

A book by American biochemist T Colin Campbell, The China Study- The Most Comprehensive Study of Nutrition Ever Conducted, is a highly-recommended guide on how to lead a healthy life. 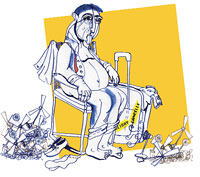 Government’s move to introduce incentives for wind energy is welcome (‘Wind break ends’, May 1-15, 2011). India has a huge potential for offshore wind farms. The length of the coastline of India, including the coastlines of the Andaman and Nicobar Islands in the Bay of Bengal and Lakshadweep Islands in the Arabian Sea, is about 7,000 km.

Both the government and industry can conduct intensive wind surveys to identify the potential windy regions. A wind fund can be set up in India. Investors in it can be given income tax exemption under Section 80C. This will attract participation.

Taking its cue from Denmark where wind farm cooperatives are doing well, India can boost its wind potential. China, Taiwan and France are ambitiously involved in setting up offshore wind farms.

Where are the roads?

The interview of Peter Newman (‘No room left for the car’, May 1-15, 2011) gives a true picture of traffic crisis in India. Virtually every day there is chaos on roads thanks to the large number of vehicles. There is an urgent need of sustainable and efficient public transport system.

Introduction of underground/elevated metro tracks can create some space on roads for pedestrians. To solve the problem of traffic congestion, the authorities should introduce more metros, low-floor buses and electric vehicles.