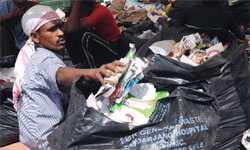 TO TACKLE the waste generated by the booming health industry, the Union environment ministry plans to amend the Biomedical Waste (Management and Handling) Rules of 1998. The ministry had posted the draft rules on its website in August for public comment and is evaluating the recommendations.

Activists and doctors have launched a campaign against the draft rules as they do not provide a mechanism to handle the ever-increasing hazardous waste. Officials with state pollution control boards have also pointed out major loopholes that could render the rules ineffective. Central Pollution Control Board (CPCB) officials, however, claim the draft rules have received little criticism.

Medical waste must be disposed of in a scientific manner because they can infect people and contaminate the soil and water, spreading diseases like HIV, Hepatitis and other infections. As per CPCB only 15 per cent of hospitals in the country have waste-treatment facilities.

The draft rules make healthcare facilities and waste-treatment agencies equally liable for effective disposal of medical waste. J Chandra Babu, scientist at CPCB’s Hazardous Waste Management Division, says healthcare facilities will now have to get authorisation from state pollution control boards before applying for licences to state health departments. This will help pollution control boards track the waste and ensure that they are disposed of properly. Unlike the existing rules, the draft rules require all clinics and hospitals, irrespective of the size, to have a waste-treatment facility or be registered with a common treatment plant. “Often, hospitals do not give a clear picture of the number of patients they treat, evading the scanner,” Babu says.

Doctors and hospital owners say the rules only increase their burden. In a letter to the ministry, Sangrur (Punjab) chapter of the Indian Medical Association (IMA), has asked how it is justified to make doctors liable for improper disposal of waste when most waste is disposed of through government facilities.

The rules need to have the provision for setting up more common medical waste-treatment facilities or upscaling them, says Ragini Kumari of Toxics Link, a non-profit in Delhi. Currently, just 168 such plants cater to the needs of more than 95,000 hospitals in the country. “When the rules get implemented, load on these plants would increase ten-fold.” she adds. Amandeep Agarwal of Sangrur IMA, agrees. The district has 200 registered hospitals but not a single medical waste treatment facility. “We send medical waste to a treatment plant in Ludhiana. Once the rules come into force, around 2,000 clinics and hospitals in the district will send waste there,” he adds. The whole of Punjab has just four medical waste-treatment facilities.

Some states like Manipur have just one medical waste-treatment facility. Many others do not report how much waste they generate or treat. Still, CPCB claims that the country treats over 70 per cent of its medical waste. The rules need to provide for better coordination among medical waste monitoring committees and transparency within the pollution control boards, Kumari says.

The rules should discourage the use of toxic products like polyvinyl chloride (PVC), thereby reducing the toxicity of the medical waste, rues Bharti Chaturvedi of Chintan, a non-profit that works on hazardous wastes. PVC, widely used as blood-bags and other medical accessories, releases toxic mercury, dioxins and phthalates into the environment.