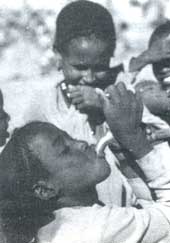 A giant pipeline, 896- km long and 13 fit in diameter, has come to the rescue of the parched people of the Cyrenaica and Benghazi regions in north-eastern Libya. The "great humanmade river" has made the greening of the country's coastline a reality. The ambitious project, costing us $eight billion, is likely to boost the economy though it has drained more than 15 per cent of the 'national oil revenues. The large pipeline carries water from wells in the Sahara desert to Cyrenaica and Benghazi. A second pipeline project aims to provide water from the Fezzan region in the south to the capital Tripoli. Ever since the aquifers and coastal wadis that supplied water to the cities and farms dried up, Libyans have tried stopgap solutions like drilling private wells or building desalination plants. The pipelines, inspite of their huge costs, provide a cheaper and long- lasting alternative. There are large aquifers in southern Libya, which are expected to provide "at least 100 years' supply of good water". But according to some analysts, the high cost of water may exceed the crop value.