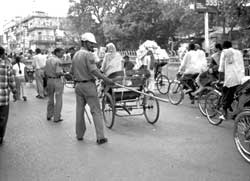 finally, there is hope for the urban poor in Delhi. Prime minister Atal Behari Vajpayee has suggested the need to dissolve the existing 'restrictive' policy for issuing licenses to hawkers and rickshaw pullers. In a letter addressed to the lieutenant governor of Delhi, Vijai Kapoor, Vajpayee has called for a 'genuine' reform policy.

Vajpayee stated that 'restrictive' issue of licenses is a perversion of a Supreme Court judgement of 1987, according to which hawking has been given the status of a fundamental right to livelihood subjected to reasonable restrictions. The prime minister's office has drafted an alternative system for the operation of the rickshaws. As per the system, the metropolis would be divided into 'green', 'amber' and 'red' zones that signify free access, fee-based access and prohibited access respectively. This division would vary during different hours of the day. Vehicles would be registered after getting reliable identification and a nominal fee would be charged for the purpose. There would be a surcharge on the fee in case of non-registration, but impounding in such cases would be prohibited.

"The prime minister has taken up the issue for the first time and it is a reason enough to celebrate," says Madhu Kishwar of Manushi, a Delhi-based non-governmental organisation (ngo), which has been working for the cause of rickshaw pullers and hawkers. She feels that this initiative will help the poor and is a big change from the ongoing economic reforms that are dominated by the interests of the corporate sector.

However, some experts are sceptical about Vajpayee's intention. They believe that the move is a ploy to garner votes for the Municipal Corporation of Delhi (mcd) elections in 2002. Some are even doubtful about its effective implementation.

In 1964, following a demand by the Rickshaw Pullers Cooperative, the then prime minister, Jawaharlal Nehru had ordered for additional licenses to be issued. But the move failed. "Bureaucrats issued the licenses but did not change the bylaws that permit issuing of licenses only to individuals and not to the cooperatives," says Rajendra Ravi, convenor of Lokayan, an organisation working for the cause of the rickshaw pullers.

Most rickshaw pullers or hawkers survive under extremely harsh conditions. Under the existing laws, when a rickshaw is impounded, a fine of Rs 300 is imposed with a store room charge of Rs 25 per day. "For quick retrieval, the pullers have to bribe officials, who, otherwise, intentionally delay the process," says Ravi. According to him, the total extortion money in Delhi amounts to Rs 2.5 crore per month. "Politicians and officials are against the move, since it would curtail them from exploiting these poor people," says Kishwar. These people are even harassed for not having the requisite accessories in their vehicles. At times, they are even physically assaulted. Moreover, mcd officials have little interest in their welfare. C P Gupta, additional commissioner (headquarters) of mcd, says that no survey has been conducted about the number of rickshaws plying on the city's roads. Out of the estimated 0.5 million rickshaws operating, only 73,000 have licenses . The law allows 99,000 licenses to be issued. This means that around 0.4 million rickshaws ply illegally, leaving enough room for exploitation.