Indonesia’s Ciptagelar community, 130 km southwest of Indonesia’s capital, Jakarta, is in many ways both a model smart village of the future as well as a relic of the past

After harvest, dried stalks of rice are stacked in huts, called leuit, where they can be stored for decades; The Ciptagelar people use traditional cookware to steam the rice on an open wood fire (Photo: Nadine Freischlad)

With its own hydro- power grid, food supplies to last a few decades and a TV channel for entertainment, Indonesia’s Ciptagelar community is in many ways both a model smart village of the future as well as a relic of the past. The 16,000-strong Ciptagelar community, living in a village inside the Halimun Salak National Park, about 130 km southwest of Indonesia’s capital, Jakarta, consider themselves adat, a community that has adhered to traditional ways of life. They claim ancestral rights to this land, where they have resided for over 600 years. In accordance with Indonesia’s laws, they are allowed to plant rice and cut trees inside the protected area. Their fields are overflowing with manicured layers of rice paddies.

The Ciptagelar village comprises a cluster of simple, rectangular houses with wooden frames, walls made of bamboo mats and palm-fibre roofs. The large open piazza is flanked by the house of the adat leader and his extended family, an assembly hall, a tiny mosque, and several stages that are used during festivities. A visit to the adat leader’s veranda offers a new perspective. Behind a small garden with potted plants is a small lab where electronic junk is stacked waist-high. Cables and tools litter the ground. The naked screen of a disassembled TV flickers with scenes from a documentary on nature. This is the workshop of Abah Ugi Sugriana, the village’s 34-year-old leader who took up the role after his father passed away in 2003 has made a drone with bits of aluminium and a remote control from an old toy car.

It is an experimental design that often crashes. He also fixes old phones, TV sets and computers. His latest project is to place signal boosters in strategic locations to extend the reach of his walkie-talkie sets so that village residents can communicate with relatives in another village. 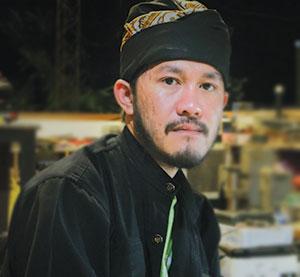 When Sugriana is in his workshop, usually after nightfall, several others are with him, picking up skills in electronics as they dismantle battery packs and gadgets. He learns mainly from the YouTube, and also during meetings with other communities in Indonesia. While it seems an unexpected hobby for the spiritual head of a village, he is carrying the torch of a tradition.

His father, Abah Anom Sucipta, began an initiative to electrify the village in the mid-1980s. He colla-borated with non-profits and private donors to build a series of micro hydro-power stations, planting the seeds for what is now an energy-independent village.

As per the Aliansi Masyarakat Adat Nusantara, an indigenous people’s organisation, Ciptagelar is the first adat community to use technology.

Not all communities have gone the Ciptagelar way. The Baduy, for example, has chosen self-isolation. Located near Rangkasbitung town, 100 km northwest of the Ciptagelar, the Baduy have outlawed change in favour of their ancestral way of life and curtailed contact with outsiders. They do not wear shoes or use modern tools. They farm, collect fruit and honey, and hunt following their traditional mandate which forbids terracing of land. In contrast, the Ciptagelar belief system is about reconciling contrasting concepts. The literal translation of the name of their goddess and protector of rice, Dewi Sri, is “two in balance”. At its core, this refers to seeking a balance between humans and nature, the physical and the spiritual world, tradition and progress, and openness towards others and preserving one’s own identity. 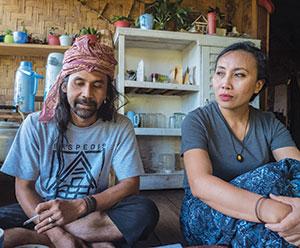 The planting, harvesting, storing and cooking of rice are governed by strict rules. Unlike in most parts of Indonesia that practice multiple harvests in a year, the Ciptagelar people harvest rice only once a year. They also follow crop rotation and do not use chemical fertilisers. Following harvest, sheaves of rice are hung out to dry, after which they go into storage in a wooden hut called the leuit, where the grain can be stored for decades.

Technology is welcome as long as it does not affect rice as it is sacred and the village life revolves around it. “We want to go with the current of development, but don’t wish to be carried away by it,” says Sugriana. He doesn’t mind cellphones, but prefers the cheaper walkie-talkie.

The same goes for electricity. Upat Supadja, in his late-50s, manages the electricity supply in the village. He says their first successful water-powered turbine was a do-it-yourself effort that took its cues from similar machines run on plantations. Bigger, more professional setups followed after collaboration with the Institut Bisnis dan Ekonomi Kerakyatan, a foundation that supports village enterprises. Still, Sugriana’s small, self-made micro turbines continue to supply electricity to clusters of houses located at a distance.

Even the local TV channel, CigaTV, streams documentaries shot by the channel manager Yoyo Yogasmana that show everyday life in the village and special festivities. “Now, it is harvest season, and we show what goes on during harvest,” he says.

The channel is also used for spreading news and communicating appeals such as asking the village people to help gather wood and build a new row of leuit.

While the community is responsibly embracing technology, it is facing a challenge from a modernday invention: plastic. Sugriana says plastic comes into the village in the form of single-use sachets for everything—from frying oil to soap. And since sachets come directly from the factory, he doesn’t see a way to solving the problem. “So far we have been asking the people to collect only organic waste and burn the plastic. But it worries me,” says Sugriana.

(This article was first published in the 16-31st July issue of Down To Earth under the headline 'Cautiously modern').