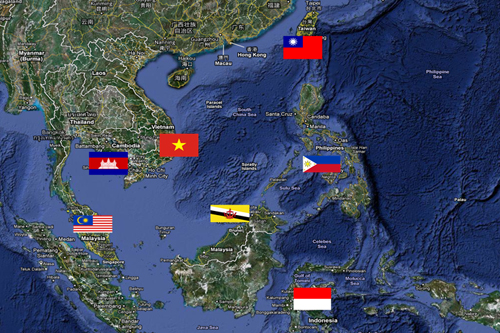 The report follows the Regional Report on Nutrition Security, Volume 1 released by the Association of South East Asian Nations (ASEAN) and UNICEF in 2014 and is a reality check on the nutrition situation of children across the region. It highlights the causes and consequences of malnutrition in ASEAN member states, identifies the key issues of importance for the region, and makes recommendations to member states on how to tackle this most fundamental and pervasive issue, which has consequences not only for public health but for the social and economic development of the region.

“Many countries in South East Asia have seen impressive economic gains in the last decade, lifting millions of children out of poverty,” said Christiane Rudert, Regional Nutrition Adviser for UNICEF East Asia and Pacific in the UNICEF press release. “However, at the same time, we have seen the rise of conditions like obesity, previously associated with high income countries. Asian children are now at risk of malnutrition from both ends of the spectrum,” she added.

The reality check on “double burden” of malnutrition

While there are more than 17 million children under five suffering from stunted growth caused by chronic malnutrition ASEAN member states, another 4.5 million were overweight or obese—and that number is rising, warns the report.  All countries reflect the “double burden” of malnutrition shows data in the report. 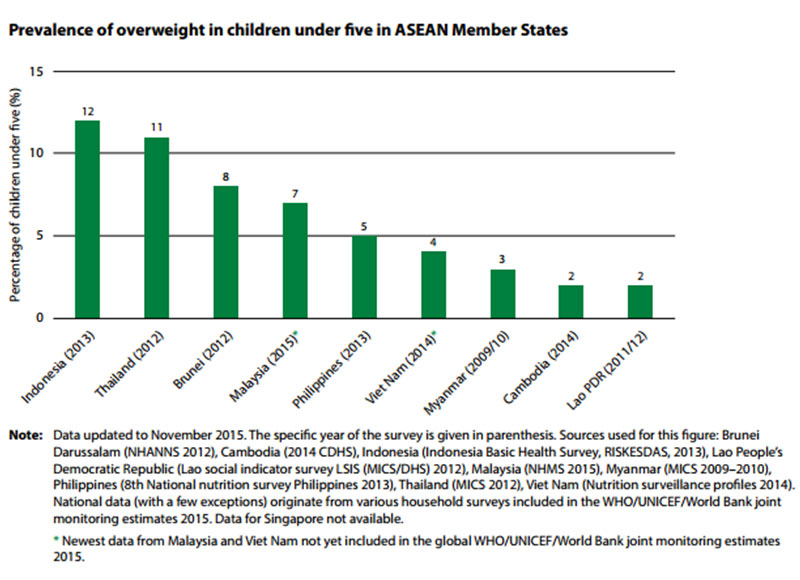 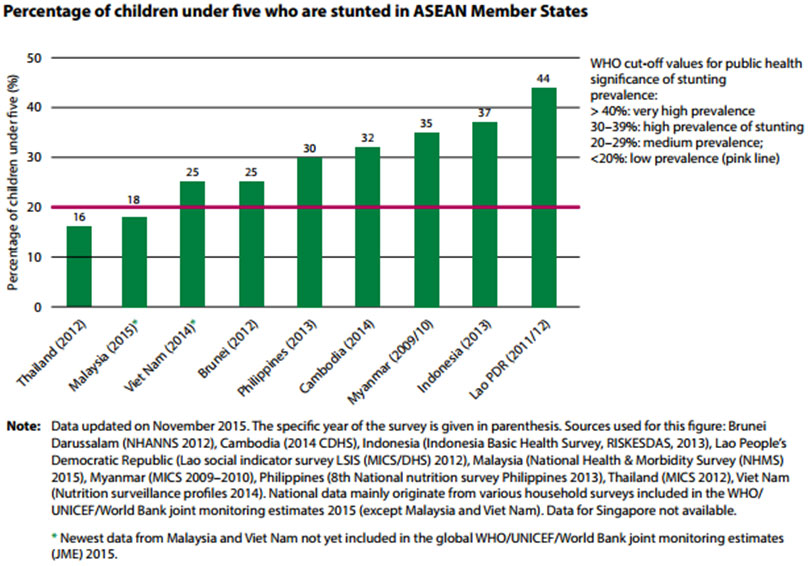 Poor progress, much more needs to be done

While all ASEAN member states have reduced stunting prevalence since the early 1990s, a few have achieved very significant reduction, shows the report. 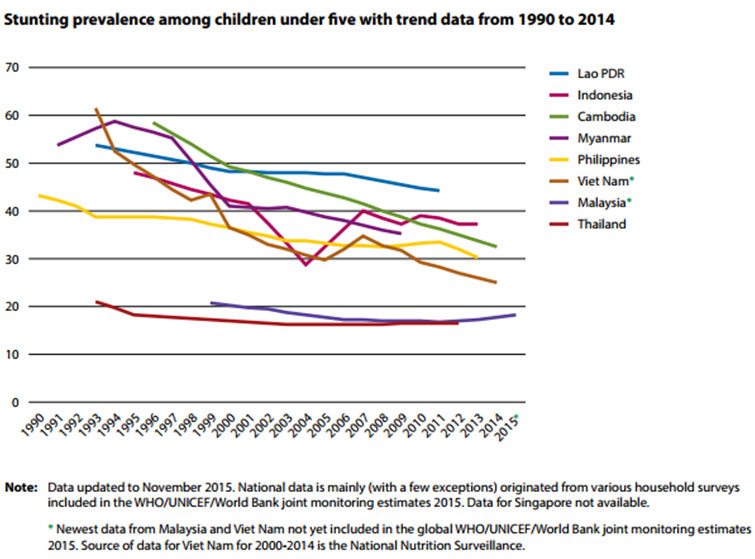 ( See also: Map on global burden of malnutrition. Developed by the Global Alliance for Improved Nutrition (GAIN), it highlights the global challenge represented by the double burden of under nutrition and overweight and obesity.

Why the region suffers

With economic prosperity in the region, millions of children have come out of poverty. But this economic gain led to a change in food habits and lifestyles, resulting in the rise of conditions like obesity. Economic growth has led to a greater market reach of “unhealthy products” into rural areas, as well as poor and middle-class families, able to afford the products but without making the “the right choices to use healthier foods instead”.

The causes of overweight and under nutrition are intertwined, says the report. Children with stunted growth in early childhood are mostly at greater risk of becoming overweight later in life. The tendency to be overweight goes up with increased access to junk food and drinks (those with high trans-fat or sugar content and low nutritional value), physical inactivity and sedentary lifestyles. This trend has been noticed across several countries in the region and is a major cause behind growing instances of non-communicable chronic diseases like diabetes and cardio-vascular diseases.

Well-timed report contributes to strengthening nutrition security in the region

As ASEAN member states implement key policies and programmes consistent with the ASEAN Post 2015 Health Development Agenda from 2016 to 2020  this timely report says that the political will along with investments in nutrition is essential for a healthy and sustainable ASEAN Community.

In September 2015, the world committed itself to achieve the Sustainable Development Goals (SDGs) which also have a number of nutrition-related targets to achieve by 2030. These targets are in-alignment with  the World Health Assembly targets for nutrition  which have been signed by all ASEAN member states. Six of the ten ASEAN members are also amongst the 55 countries who have joined the global Scaling Up Nutrition (SUN) movement, which supports countries in building national commitment to accelerate progress towards reducing under-nutrition.

This report is therefore well-timed in the context of the global and regional attention drawn towards nutrition and underlines the commitment of ASEAN and its member states to strengthen nutrition security in the region.

It is a call for political commitment and investment in nutrition

Undernourishment in the first 1,000 days is very much related to overweight and obesity later in life according to the report. It say that poor nutrition during the first 1,000 days—from pregnancy through to a child’s second birthday—can result in life-long and irreversible damage and this will have significant consequences at the individual, community, and national levels.  Hence, investing in reducing malnutrition yields tremendous economic and social gains for a country, and it is also an ethical imperative reminds the report.

The prevalence and economic burden of overweight, obesity and NCDs are increasing rapidly in ASEAN member states, and they constitute a serious public health concern with spiralling costs. To deal with this, this report makes a call for investment in health promotion and disease prevention alongside efforts to cope with the existing disease burden.

Child malnutrition also has a significant impact on countries’ economies. It reduces parents’ productivity and creates a burden on health care systems. But improving nutrition can add 2–3 per cent to the Gross Domestic Product (GDP) of poor countries and drive their economic growth, says the report and provides evidences to show how a nutritionally-secured ASEAN region can lead to overall social and economic development of the region.

It shows that every dollar spent on nutrition in the first 1,000 days of a child’s life yields a saving of an average US$ 45 and in some cases, as much as US$ 166 (for example, Indonesia). 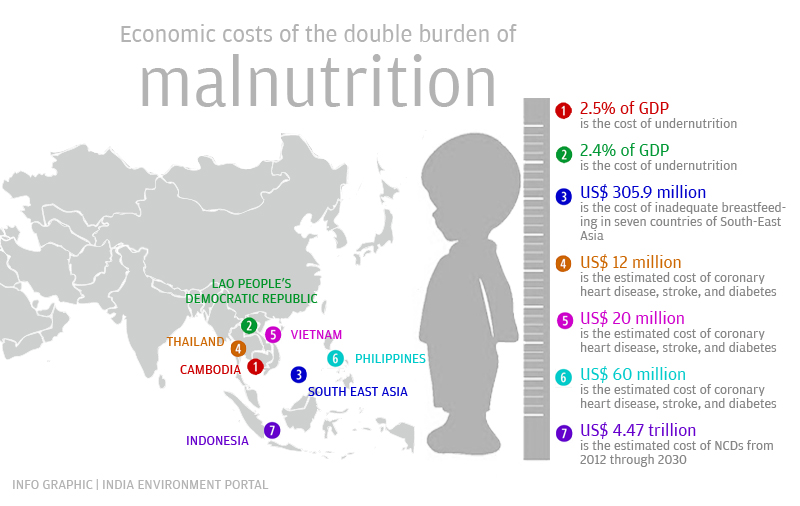 Based on the high cost to individuals, households and countries of dealing with all forms of malnutrition and its consequences for health, it is imperative that high-level commitments to nutrition improvement are translated into effective and equitable actions in ASEAN member states.

Double burden of nutrition cannot be tackled in silos says report demanding cross-sectorial and multi-dimensional actions from governments and other stakeholders of the ASEAN nations. Multi-sectoral approaches  including Water, Sanitation and Hygiene (WASH), agriculture, education, trade and social protection are increasingly important to address the double burden of malnutrition, says the report. It calls for institutionalisation of nutrition services within health systems, benefiting from health-care reforms and the move to universal health coverage in some countries.

Demanding an increase in budget to tackle malnutrition, it asks the governments to focus on improving feeding practices for infants and young children, provide treatment for acutely-malnourished children, increase agricultural varieties and hygiene practices as well as ensuring actions to educate girls. It demands political will and actions from all stakeholders and especially governments to strengthen nutrition policies and actions in ASEAN countries.

Even as this WHO-UNICEF report calls for effective regulations on marketing of junk food and sugary drinks to children, it deserves attention of the booming food processing and beverages sector for a socially and ethically-responsible investment for the sake of millions of children in not just the ASEAN region, but in other developing countries too including the global south.