Words such as ‘arrested’, ‘murder’, ‘violence’ have surged on microblogging site since the killing of George Floyd

On May 26, 2020, the mood of Twitter users went for a sharp toss — the day was sadder than the last seven days as negative words such as ‘murder’, ‘killed’, ‘death’, ‘not’, among others, cropped up excessively in interactions. Three days later, on May 29, the microblogging site experienced its saddest day in history — ‘arrested’, ‘murder’, ‘violence’, ‘killed’ and ‘shooting’ heavily dominated the tweet language as a white police officer was charged in George Floyd murder case.

On May 25, 46-year-old Floyd was allegedly killed in Minneapolis, Minnesota, during an arrest for using a counterfeit bill, triggering massive anti-racist protests. A week earlier, however, on May 18, Twitter was happier: Words such as ‘best’ and ‘love’ were frequently used in tweet interactions.

The observations were produced from an analysis by hedenometer.org, a research tool that indicates average happiness on the social networking app. To quantify happiness (or sadness), it compares the language used in tweets to a database of over 10,000 common words collated from Google Books, The New York Times, music lyrics and Twitter.

In simpler words, it measures the world’s daily happiness level through words used on Twitter, by observing and collecting data on the social interactions of people. 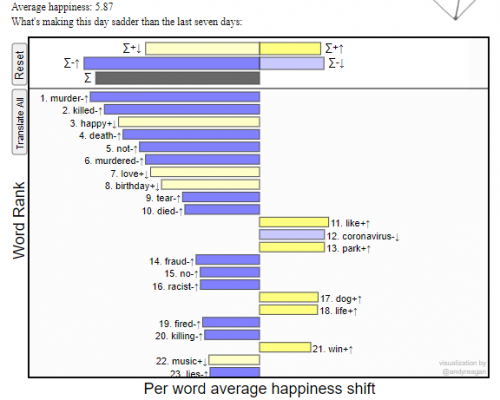 Word shift graph as on May 26.
Words ranked in order of decreasing percentage contribution to the overall average happiness difference. The + / - symbols  indicate whether a word is relatively happy or sad compared to average happiness for the entire US text.
Source: Hedonometer

The main factor driving the relative happiness scores was the greater foortprints of positive words on May 18 — when the happiness average was 5.92 — as compared to 5.87 on May 25. ‘Distancing’ and ‘drug’— used in the wake of the novel coronavirus disease (COVID-19) pandemic — were reflective of the relative sadness score for the same day.

The trends have pointed to a declining mood in the United States Twitter since March — the COVID-19 outbreak that has claimed more than one lakh lives and then the killing of Floyd and subsequent unrest in the US and other countries have been the driving factors.

The mood continued to deteriorate through the week (starting May 25). On May 29, white police officer Derek Chauvin, who allegedly knelt on Floyd’s back, was charged with murder. The same day, ‘arrested’, ‘murder’, ‘violence’, ‘killed’ and ‘shooting’ surged on the site. The average happiness plummeted to 5.66. 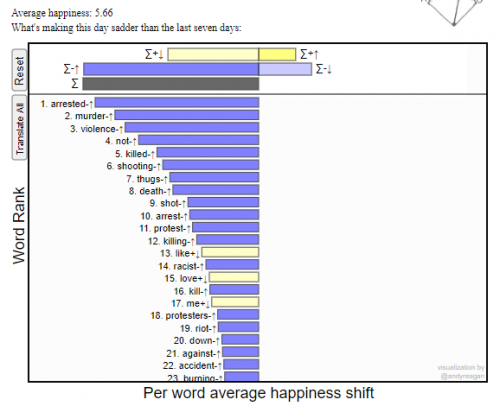 Word shift graph as on May 29. Source: Hedonometer

Yesterday was the saddest day in the history of @Twitter pic.twitter.com/91VP3Ywtnr

Events such as police brutality against anti-racism protests caused the happiness to spiral further downward on May 31, before it improved, albeit slightly. On June 15, ‘women’ and ‘girl’— the second and seventh most frequently used positive words indicative of relative happiness — pushed the average happiness score up to 5.82.

The first significant drop in happiness occurred three months ago with the first dangerous signs of COVID-19 spread. For example, on March 12, the most notable words used were ‘coronavirus’, ‘virus’, ‘corona’, ‘pandemic’ and ‘cancelled’. The average happiness score was 5.71 — words like ‘love’ and ‘happiness’ were pushed down in users vocabulary. 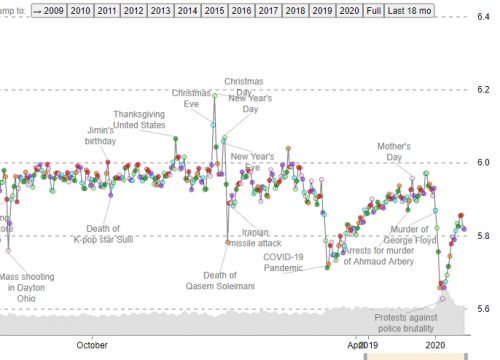 Average happiness for Twitter for US text. Source: Hedonometer

Twitter has since March 12 seen a prolonged period of ‘sadness’—‘pandemic’, ‘coronavirus’, ‘quarantine’, ‘virus’, ‘deaths’— have since been the language of Twitter.