Lightning claims more lives in Odisha than any other calamity

14 deaths on September 16 takes this year's toll up to 191; Centre ignores state's plea to declare lightning a natural calamity

Odisha is often called the country’s natural disaster capital because of the frequency with which calamities such as floods, droughts and cyclones hit the state. Statistics show that of all the calamities that befall the state at regular intervals, lightning claims more human lives than any other natural disaster.

As many as 3,236 people have been killed by lightning in the eastern Indian state in the past 13 years. On Monday, 14 persons were killed after being struck by lightning in separate incidents in four districts. The victims were farmers, daily wage labourers and people who were in the fields.

Till September 16 this year, 191 persons, mostly in rural areas, have been killed by lightning.

Mayurbhanj, Dhenkanal, Ganjam and Sundargarh are the districts from where reports of maximun number of such deaths pour in every year. This year, as many as 28 deaths have been reported from Mayurbhanj district alone; it has vast stretches of forests. 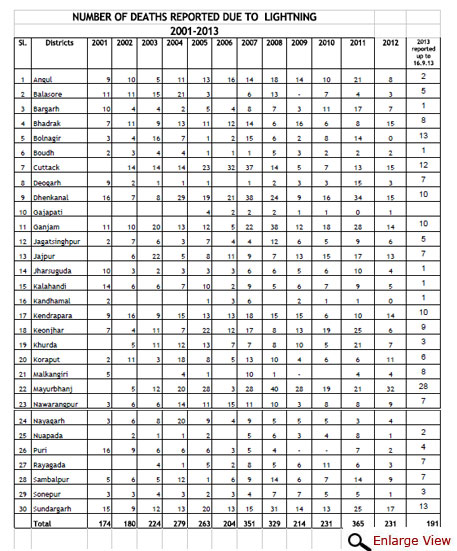 “Thunderstorm which accompanies lightning takes places basically for three reasons – sufficiently available of moisture, unstable air and atmospheric mechanism to lift the air. During the past one week, the maximum temperature, especially in Bhubaneswar and Cuttack, was constantly touching 34 to 35°C. Atmospheric moisture in the region remained over 70 per cent. Besides, an upper air circulation had formed over Bay of Bengal on Monday. As a result of combined impact of these conditions, a 20 km radius around Bhubaneswar and Cuttack was vulnerable on Monday,” said S C Sahu, director of Bhubaneswar Meteorological Centre.

Nine of the 14 deaths because of lightning occurred around Bhubaneswar and Cuttack. Sahu said when a lightning strikes it generates 30,000°C emperature and 100,000 ampere current. “People working in open fields become exceedingly vulnerable to lightning,” he said.

Sahu said Doppler radar can predict occurrence of thunderstorm to some degree of certainty four to five hours before occurrence. Proposal were sent for installation of four Doppler radars in Odisha, but the plan could not materialize for various reasons.

According to Department of Science and Technology that started STORM (Severe Thunderstorms – Observations and Regional Modelling) Programme to improve the model of predicting thunderstorm which mostly accompanies lightning, the eastern and north eastern part of the country – Gangetic West Bengal, Jharkhand, Odisha, Assam and parts of Bihar—gets affected by severe thunderstorms during pre-monsoon months, particularly in April-May.

Odisha has for long been asking the Union home ministry to place lightning in approved list of natural disasters so that it could compensate for the loss of lives from State Disaster Response Fund. There has been no response from the ministry till now.

“At present, we pay Rs. 1.5 lakh to the kin of victims from the Chief Minister's Relief Fund. We have been regularly reminding the Union government to identify lighting as natural calamity. If it gets approved, compensation could be paid for human injuries and animal deaths,” said Pravat Ranjan Mohapatra, deputy relief commissioner of Odisha.

In a letter to Union Home Minister Sushil Kumar Shinde in May last year, Chief Minister Naveen Patnaik urged, “on an average 285 persons die per year due to lightning. The number of casualties due to lightning (in the state) is the highest among all calamities. The same is the case in many other states. Lightning should be included in list of approved calamities.”