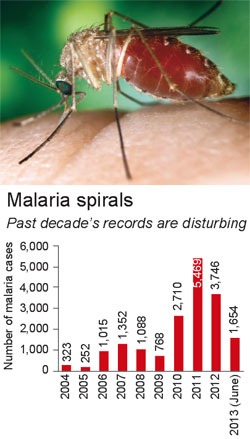 VALSAD, the southern district of Gujarat, has been grappling with malaria in its forest areas for many years. But the number of cases has been rising steadily instead of declining, health department’s latest data shows.

Two of Valsad’s five blocks, Karapada and Dharampur, which occupy maximum forest area in the district, accounted for 83.4 per cent of the total malaria cases in Valsad in 2012. “Containing malaria in forests is a big challenge for health officials. This year, southern Gujarat has been flooded after heavy rainfall, making matters worse,” says A S Sanghvi, chief district health officer. By June-end, Karapada registered 684 malaria cases and Dharampur 253 cases. Valsad, Umargaon and Pardi blocks recorded 143, 78 and 81 cases respectively.

Despite the state government’s claim of extensive measures to contain the disease, the malaria graph in the forest area shows a steep rise. “When monsoon begins, we decide the number of places and amount of medicine to be sprayed,” says B Patel, district malaria officer. To contain breeding of mosquitoes, the health department achieved 222 per cent of its target of fogging and spraying in Kaparada this year. Last year, it achieved 171 per cent. In Dharampur, it achieved 104 per cent of its target. Last year, it was 143 per cent. Compared to this, in other districts the health department had achieved only about 60 per cent of its target. “Containing malaria in forests is tougher than in other areas. Rains create pools of water in which mosquitoes breed. It is not easy to find each pool in forest area and spray medicine there,” says Sanghvi.

As per government policy, health workers go house to house to collect blood samples from suspected cases. After laboratory results, positive cases are treated for malaria. “But the process takes time and in the meanwhile patients’ condition can worsen,” he says.

To tackle this, the district health department has appointed extra workforce to collect blood samples. “We have made five teams of two health officers each for increased surveillance. Accredited Social Health Activist, Auxillary Nurse and Midwives and male nurses visit each house every 15 days. The new teams do independent rounds. Thus, we are able to reach each house once every week. This reduces the gestation period and we can detect the mosquito infected area faster,” says Sanghvi. The district health department pays Rs 5 to the health workers for each malaria blood sample collected. But despite the efforts, primary health centres (PHC) of Karapada and Dharampur remain high-risk PHCs in the district.

The reason for the recent upsurge of malaria in Valsad’s forest areas can be known only after a proper study is done, says R C Dhiman, scientist at the National Institute of Malaria Research. Usually, malaria cases rise because mosquitoes develop resistance to medicines. “But this does not apply to forest areas because use of medicine is less there. Surveillance in forest areas is usually poor because they are tribal areas, which are sparsely populated,” he says.

As confusion on rising cases of malaria in the tribal belt of south Gujarat persists, the recent downpour is creating fear of yet another tough year fighting the dreaded communicable disease.

ICT - A rapid, innovative but simple technique for malaria diagnosis

Rising incidence of malaria in Ahmedabad, Gujarat in 2011-12

Climate forcing and desert malaria: the effect of irrigation