A former zamindar renders his downfall into a fight for justice 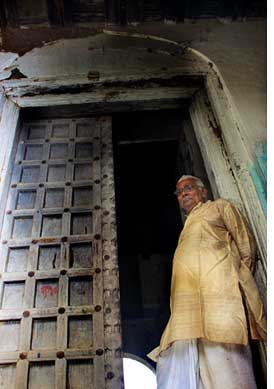 Dressed in a beige kurta and a stained, white dhoti, Mawar Jagdishwarjeet Singh emerged from a 20-foot-high wooden door of his Mughal style mansion. Grey-haired, mustachioed, wearing a thin smile.

Two decades ago, zamindar Jagdishwarjeet Singhs word was the law in Manatu block of Daltonganj, now in Jharkhand. Rumours are that at the slightest defiance one would be thrown into the cage of a hungry tiger. His whip was said to have always been wet with blood.

Singh once owned 240 hectares (ha) of land, five elephants, 12 horses and hundreds of cattle. He had his own power station, seven imported cars and 21 rifles. In the 1980s, the government acquired 200 ha of his land under the Land Ceiling Act.

Today at the age of 85, Singh is living a different life. His mansion is in a shambles. But he retained a majestic gait as he walked towards the garden.On the one side of it, parked under a low-ceiling garage, was an imported Chevrolet, covered in dust. On the other stood a fat buffalo, wagging its tail. Three men and five dogs followed him. You must have heard stories about my cruelty. The police and the administration lodged 96 cases against me, and I have been acquitted in all of them, he said, looking straight into the eyes.

Singh claims to be a victim of political rivalry and bias of the decorated police officer of Palamu, Kishore Kunal. My family had loyal relationship with the then chief minister, S N Sinha, but Bhishm Singh (then governor of Bihar) wanted my support to defeat Sinha. I refused. Changing alliance is not in our blood, he said. Bhishm Singh fed Kunal with everything that was against me. Cases were lodged against me and charges varied from stealing eggs to keeping bonded labour. Someone called me man-eater, some even womanizer.

Kunal remembers Singh differently. For him Singh was a strongman of Manatu whose atrocities against bonded labourers forced the administration to take action. Kunal recalled when the police went to arrest him they had to retreat under the pointed guns of the zamindars army. If he can challenge the police it is a matter of guess how he treated labourers, said the former superintendent of police.

Singh enjoyed provoking tough questions. Ask me anything you want to. We are people of principle. Pointed questions are welcome, he said in a whisper. So did he throw men in a tigers cage? With a hearty laugh revealing tobacco-stained teeth, he said, I never had a tiger. It was a cheetah. Then he narrowed his eyes and revealed, That cheetah was never caged. It used to roam this mansion. I love animals. But I did not protest media reports because I wanted the truth to prevail on its own. It was easy to accept the offer of Bhishm Singh. What was not easy was to give up on my values.

Kunal believes the truth was easy to suppress, with witnesses in most cases being poor labourers. They could have been bought by the zamindars family, he said. Singh accuses me of being politically motivated but the police were given a grand welcome by the people after cases were filed against him, he added.

Through the partially open gate of Singhs mansion, cracks in the ceiling were visible. I have lost wealth but there is the satisfaction of being relieved of the false charges, said Singh, p ointing towards the broken walls of the mansion, where he lives with his wife and two sons. Justice has come to me at the cost of my devastation. Any lingering wish? If perchance I meet Kunal with folded hands I would ask: why?

Today his name does not ring a bell in Daltonganj, but ask people about the Man-eater of Manatu, the nickname he earned, they nod, He is a dangerous man.