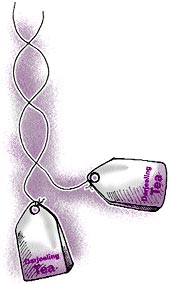 darjeeling tea may soon have its characteristic aroma patented. The Centre for dna Fingerprinting and Diagnostics (cdfd), Hyderabad, is soon starting a project to develop molecular markers, which will distinguish this world famous variety from its cheaper cousins and protect its market value. The Union ministry of commerce has recently asked cdfd to develop a genetic protocol for Darjeeling tea on the lines of the one developed for basmati rice.

The proposed project may prove a shot in the arm for Indian exporters to authenticate Darjeeling tea as in the case of basmati. Exporters of traditional basmati varieties are already vying to apply the technique to authenticate their product. Recently, United Riceland, one of the biggest exporters of traditional basmati rice from India has sought help from cdfd to certify its variety by using the genetic marker system. T he technique developed by cdfd promises to detect adulteration even up to 0.75 per cent in basmati. It was developed after the cdfd team, headed by J Nagaraju, studied 24 rice varieties from a subset of three rice groups of traditional basmati (tb), evolved basmati (eb) and semi-dwarf non-basmati (nb).

The scientists used two classes of dna markers for the purpose of carrying out genetic analysis of the rice varieties. The first class of marker is helpful in detecting the degree of polymorphism (a variation in the sequence of dna among a set of individuals) while the other one helps to fingerprint the rice variety.

The study determined that the degree of polymorphism 'differed substantially' among the three rice groups, with tb showing the lowest level of polymorphism. The results from the calculation of genetic diversity have also shown that by using two or three informative primers, the tb from the eb and nb varieties could be 'unambiguously' distinguished.

Moreover, tb varieties were found to have the least diversity compared with the eb and nb varieties, indicating that 'most of the traditional varieties have probably originated from a single land race'.

The marker would even aid detection of tb adulteration with evolved varieties, which has become a major problem. It would also help basmati breeders to ascertain the genetic proximity of evolved varieties to the traditional ones before finally authorising them for commercial cultivation. Nagaraju says that the dna profiles used in their research paper could help to register the basmati varieties to protect breeder's rights (in case of evolved varieties) and the country's interests (in case of traditional varieties). The same advantages would be applicable to Darjeeling tea once the marker for it is developed.