Mexico's Chihuahuan desert holds some of the largest natural crytals 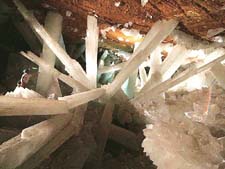 This cave of crystals, buried around 300 metres below Naica mountain in Mexico's Chihuahuan desert, contains some of the largest natural crystals ever found. The cave (10 metre wide, 30 metre long) is a horseshoe-shaped cavity in limestone. Its translucent beams, jutting out from crystalline floor and blocks, measure up to 11 metres and weigh around 55 tonnes. Though discovered in 2000, geologists have recently been able to unlock the mystery of how the crystals grew to such gigantic proportions. The crystals, they are saying, thrived since they remained submerged in mineral-rich water in the cave at around 58C. The anhydride-gypsum present in the water begins to dissolve at this temperature. After millions of years its molecules formed huge selenite gypsum crystals.