MGNREGA wages should not be less than minimum wage of a state: expert panel 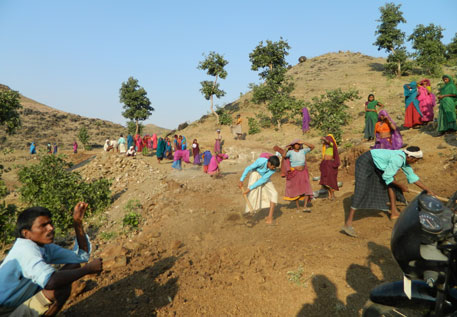 A committee of experts set up by the Union rural development ministry has recommended that the wages paid to unskilled agricultural labourers under the Mahatma Gandhi National Rural Employment Guarantee Act (MGNREGA) should be the minimum wage fixed by the respective state or the current wage as per the consumer price index for agricultural labourers (CPI-AL), whichever is higher. The panel also recommended linking the wages to the Consumer Price Index, Rural (CPI-R), for protecting MGNREGA wages against inflation.

If the recommendations of the committee are accepted, the yearly budget of the scheme would have to be raised from current Rs 34,000 crore to above 40,000 crore. Under MGNREGA, a rural household can get at least of 100-days of unskilled work in a year.

The committee comprising seven members and headed by economist S Mahendra Dev was set up in October last year. The committee submitted its report last week.

The panel has recommend that MGNREGA wages cannot be less than the minimum wage of a state, which is revised on a yearly basis. The minimum wage fixed by state of Bihar for agriculture labourers, for example, is Rs 162 a day whereas it is Rs 500 in Kerala, the highest fixed by any state in the country.

At present, there are twelve states where MGNREGA wage is lower than the fixed minimum wage of the state.

“The baseline for MGNREGA wage indexation from 2014 may be the current minimum wage rate for unskilled agricultural labourers fixed by the states under the Minimum Wages Act or the current MGNREGA wage rate, whichever is higher,” says the report.

The labour bureau under the ministry of labour computes CPI-AL and CPI-RL and these are regularly revised according to change in prices of fixed basket of goods and services consumed. CPI-R is computed by the Central Statistical Organisation of Ministry of Statistics and Programme Implementation.

The committee had to make informed choice as to which price index would be most suitable index to link with MGNREGA wages so that it protects workers from rising inflation.

The committee in its report recommended for opting for CPI-R because of the other two indices  use 1986-87 as base year and since then rural consumption pattern for goods and services has undergone a seachange. CPI-R is a newly constructed index, which takes 2010-11 as the base year.

Another drawback with earlier two indices is that CPI-AL covers agricultural labour households and CPI-RL covers households of rural labourers. But CPI-R provides the price changes for the entire rural population of the country.

Budget allocation for MGNREGA may increase

If the committee recommendations are accepted, the ministry will have to demand for more funds for paying revised wages under a scheme already troubled by funds shortage.

Nikhil Dey, an activist and also committee member, said the budgetary allocation requirement could go higher than this. “In 2008-09, the allocation of the scheme was 40,000 crore. Since then it has been pruned,” said Dey.

The ministry has not reacted to the recommendations yet. “We are looking into this report,” said a senior official who did not wish to be identified.

On July 11, The Supreme court had passed an order, directing all states to pay wage under this scheme as per state minimum wage Act, while disposing of a Special Leave Petition filed by the Centre against a Karnataka High Court verdict that said wage under the flagship programme should be in tandem with the state's minimum wage Act.