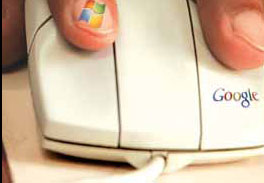 One doesn’t usually associate Microsoft with a campaign for fair trade practices. But pushed into a corner by Google, the software biggie has teamed with PR and marketing agency Burson-Marsteller on a campaign that aims to “begin important industry discussions around competition”. Analysts say the real purpose of the campaign is to get industry support for asking regulators to block the merger of Google Inc. and the Internet advertising solution company DoubleClick. On behalf of Microsoft, Burston- Marsteller has been sending out e-mails to companies to sign a petition based on a set of principles inspired by concerns raised around the Google-DoubleClick deal. The marketing company did not say that the campaign was created to directly block the Google-DoubleClick merger. However, the petition clearly points to the group’s interest in taking a stand against the Google-DoubleClick deal, which opponents claim would give Google control of 80 per cent of ads served on the Internet. For example, its first principle on the petition asks signers to agree that “regulators should carefully scrutinize any transactions in the online advertising sector that would create or enhance a dominant market position.” Google announced plans to acquire DoubleClick for US $3.1 billion in April, 2007. When asked about Microsoft’s own anti-competitive practices, something for which the European Commission recently upheld a US $613-million fine against it, a Microsoft spokesperson said the company never attempted to purchase a competitor to become a leader in a market. Google has defended itself in blog posts saying competitors such as Microsoft and Yahoo also are buying up companies to help them boost online advertising and consumer marketing strategies. Ôûá