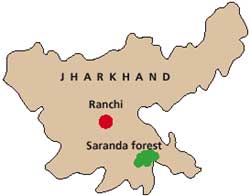 jharkhand seems to be poised for a large-scale confrontation in response to 42 memorandums of understanding worth some Rs 1,70,000 crore signed by the state government with various iron and steel companies, including big names like the Mittals, Jindals and Essar. But this time around there is a twist to the tale -- it's not just the tribals who are opposing the projects but also the state forest department (fd), with some young officials coming up with a proposal to protect the forests of West Singhbhum district from the mining the proposed projects entail. For the tribals who depend on this forest, this is not a welcome development -- should the proposal find takers they might find the forest out of bounds.

Three divisional forest officers (dfos) -- of Saranda, Kolhan and Porhat divisions-- are attempting to protect Saranda, home to Asia's largest sal (Shorea robusta) forest and an important elephant habitat, which companies are eyeing for its large iron ore deposits. They've sent a proposal to the state fd to declare the area a 'virgin forest'. "Since mining can take place in virgin forests only after exploring possibilities in non-virgin areas, this is one way to protect biodiversity and the variety of species in the area from destruction," says C P Khanduja, dfo, Saranda, who drafted the proposal. The fd is vetting it before sending it to the government.

"The idea is to restrict mining in Saranda forest, or at least make it more difficult or expensive to acquire land," says D Venkateshwarlu, Porhat dfo. Making leases more expensive will have the benefit of forcing mining companies to rationalise extraction. As of now, they don't. Because it is cheaper to abandon mines before they are fully mined --extraction costs go up over time -- and move to fresh land.

In the 85,000 hectares (ha) of the Saranda division, 28 leases for iron ore mining already exist in about 9,300 ha. Now the mining department wants an additional. "What will be left of the forest then?" asks Khanduja. Already, the last three years have seen an increase in mining. Illegal mining in and around the forest is rampant. Thousands of trucks jam the roads leading to the forest from Chaibasa past Nowamundi, disturbing people and damaging ecology. The proposed scale of some projects is an indication of things to come. The Mittals require some 8,000 ha. On the anvil is a steel plant with a capacity of 12 million tonne and investment of Rs 40,000 crore. The Tatas want 4,800 ha. They are planning a 5-million-tonne plant and Rs 35-crore investment. The Jindals are plugging for 1,800 ha, with a 10-million tonne mill and Rs 11,500-crore investment.

Saranda too has been affected, but further degradation will have serious consequences for its considerable biodiversity. The dfos have identified 237 forest compartments out of the total of 289, covering 64,000 ha, as being very compact dense forest areas still untouched by mining. A survey by them showed that a patch of 40 by 40 metres has some 30 plant species. Also, apart from elephants, the forests are home to the flying squirrel, four-horned antelope, sloth bear, leopard and deer among other species. K Z Bhutia, the Kolhan dfo, reports having seen many oriental white-back vultures -- listed by the World Conservation Union as a highly threatened species. "We want to save the forest from exploitation. Giving it the status of a virgin forest will protect the areas from being used for commercial activities. This will, in turn, protect elephants and other wildlife," says Bhutia.

In 2001, the district was declared an elephant reserve under the central government's Project Elephant, but the number of elephants has gone down from 424 in 2002 to 375 in 2005. "High iron ore content in the rivers makes the water unfit for drinking and the noise of trucks carrying ore scares elephants away from Saranda, which is the core area," says Khanduja. According to R K Singh, who did doctoral research in Saranda between 1993 and 1998: "Mining, along with unmanaged tailing disposal into the river system is the biggest threat to elephant conservation." The Manoharpur group of mines around Chiria transport their ore using roads going through the forest, which is also the main elephant migration route from Saranda to Kolhan. A narrow gauge railway track along this road, used to transport ore, will be converted to broad gauge. The railways have sanctioned a Rs 190-crore project to transport more ore from the Chiria mines.

As their habitat is increasingly disturbed, elephants go further afield in search of food. Reports of human-elephant conflicts have increased in the Kolhan and Porhat divisions. Most funds received under Project Elephant are spent on paying compensation for destruction of crops by elephants.

The problem is that the issue has got caught in a development-conservation debate. But the foresters point out that destroying forests is not the only option. "Our suggestion is that they should explore iron ore available in other areas like Chaibasa south," says Khanduja.

The dfos are also getting after existing leaseholders to keep to their commitment of providing funds for development of villages around the mines. "While companies were supposed to contribute five per cent of their investment in tribal area development, they have not done so in the last 50 years. But now we have imposed a condition of contribution," says an official.

The Jharkhand government, on its part, has decided to not allow private investors access to the state's iron-ore reserves unless they set up steel plants in the state itself. "We have a problem of unemployment here and because of that Naxalism is on the rise," says Jharkhand mining secretary A K Singh. "We have to bring in industries to generate employment." But for this, the government has to acquire land, exacerbating conflict. District commissioners have been ordered to identify land for industries. But in many areas where surveys were attempted, tribals chased away company and government officials.

Most of Singhbhum falls in Schedule V (tribal) areas, where land transfers are restricted. That apart, two old laws, the Chotanagpur Tenancy Act (cnta) and the Santhal Parganas Tenancy Act, restrict the sale, purchase and transfer of tribal land to non-tribals. Land can be acquired under cnta for 'public purposes' with the consent of villagers, but tribal leaders now question whether giving leases to mining companies can be described as public purpose.

Mining is the largest cause for land alienation in Jharkhand. Between 1951 to 1991, over 34 per cent of land acquired for development projects was for mining. This displaced about seven per cent of Jharkhand's population, of this nearly half were tribals. Many were never rehabilitated or left to the mercies of the steel and mining companies.

In Kiriburu, for instance, where the public sector Steel Authority of India (sail) has its mines, deep pits scar the forests. In the nine villages that fall under Kiriburu panchayat, life is bleak. Basant Lal, who became sarpanch in the last local body elections, has been writing to the government pointing to the abject conditions of villagers despite the company promising jobs and development. "Our people, mostly adivasis, get very little work in the mines. Mostly people are brought in from outside," he says. It's the same in other villages.

Unsurprisingly, Naxalites have a strong presence here. While it has been alleged that local groups take 'levies' from the mining companies, higher up in the command structure there is opposition to mining. On December 20, 2005, the Bihar-Jharkhand special area committee of the cpi (Maoist) sent out a press release opposing the proposed expansion of iron ore mining.

A section of the administration has also joined the tribal people in their fight against mining: some openly, others tacitly. In Manoharpur, between the Saranda and Kolhan forest divisions, tribal groups are preparing to resist land acquisition. Traditional tribal organisations like the Ho Mahasabha are at the heart of the movement. The Jharkhand Mines' Area Co-ordination Committee, a Ranchi-based organisation, is also leading a campaign against acquisition of tribal land. Apprehending large-scale displacement of tribals by the proposed Jindal Industries project at Potka in East Singhbhum, tribal organisations have formed an 11-member committee to mobilise people against it.

The state is also mobilising. The struggle to protect tribal rights and oppose destructive industries is being described as a "law and order" problem and could be suppressed by being branded Naxal. Industrialists want protection and the government often obliges. Sushil Barla of johar, a Chaibasa-based human-rights organisation, says forces have been sent into Jaraikela, Chota Nagda, Manoharpur and Goelkeda villages.