Desertification in India: Mining monstrous for Goa, but urbanisation digs a bigger hole 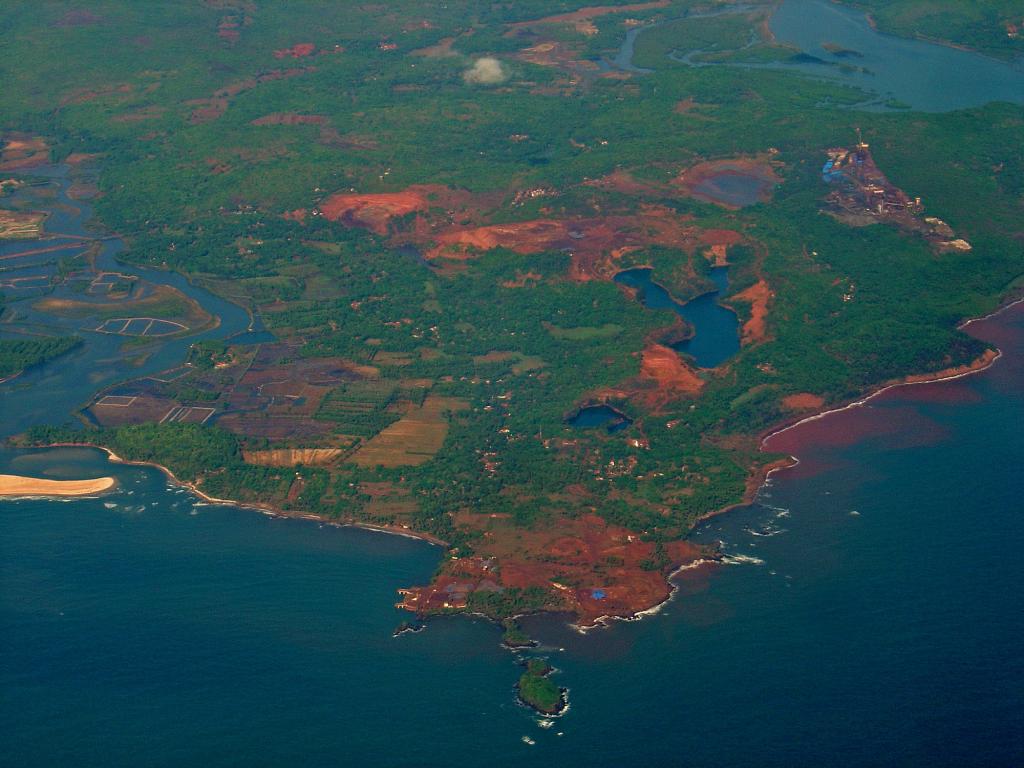 The effects of the 2008 Beijing Olympics are still evident in Goa. The rush to export iron ore from Goa to satiate China’s building frenzy in the run up to the games and after degraded large swaths of what was once good tree canopy cover. From up above, the terrain with these mining pits looks gangrenous, like wounds from yesteryears still festering.

Unscientific and illegal mining in Goa has led to severe degradation, according to the Indian Space Research Organisation’s (Isro) Land Degradation and Desertification Atlas published in 2018.

Goa has more than 700 square kilometres under mining and two talukas (Bicholim and Sattari) in North Goa, one of the two districts in India’s smallest state, have around 50 per cent of these mines.

According to the Goa’s Directorate of Mines Geology, in 2011, when scoping for this atlas began, there were 27 mines in Bicholim and 11 in Sattari. In the Isro atlas this area is shown to have large swathes vegetative degradation, with severe scrub degradation making most of it.

Also, more than 50 per cent of the land in the district is degraded, according to the atlas. Of this, 43 per cent is because of vegetation.

Goa has three geographical regions — the Sahyadri range of the Western Ghats, the central midland plateau and the alluvial coastal plains. Most of North Goa is part of the midlands with patches of moderately dense forests that weave in open forests and scrub lands.

This region north and northeast of the river Mandovi (or Mahadayi) has most of the mines.

The first time mining was stopped in Goa was in 2012 by the Supreme Court after a series of reports including the ones Goa’s public accounts committee, Shah Commission and the Central Empowered Commission (CEC) submitted pointing to large scale illegal mining.

The Shah Commission report indicated that about 2,800 hectares of land was under encroachment and of this, 578 ha was being actively mined. This encroached area also included wildlife sanctuaries and reserved forests.

Moreover, of the 124 mines operating in Goa in 2010, none had approval from the National Board of Wildlife (NBWL). Of these, 33 were operating within a km from the boundary of the nearest national park, sanctuary or protected areas without approval of NBWL.

Goa Foundation, a non-profit fighting illegal mining, analysed the Shah Commission report and found that nearly 11,000 ha of forest were illegally encroached for mining. There was close to 750 million tonnes of overburden in dumps across the state and most of these were outside the mining lease areas, according to the CEC report.

When it rains the area around the mines becomes red with lateritic soil, said Ramesh Gauns, a teacher and an anti-mining activist in Bicholim.

“To get a tonne of ore, 2.5 to 3 tonnes of overburden (soil) needs to be extracted. This overburden is mostly dumped outside mine-leased area on revenue and agricultural land which leeches out,” Gauns said.

Many of these overburden dumps were from mines that were closed in the 1970s, said Miguel Braganca, a former president of the Botanical Society of Goa and an agriculture expert.

Cashew would often be planted, on privately-owned dumps and by the Beijing Olympic Games, there was a good canopy cover on them. The dumps on revenue and forest lands were planted with Australian Acacia.

But between 2005 and 2012, due to Chinese demand, even substandard ore or mining reject from these dumps was exported.

“Companies like Sesa Goa started a scheme called Udaan to identify overburdened dumps in the state, including ones which were 25-30 years old and had a good canopy cover on them,” said Braganca.

Employees were given cash incentives to identify these dumps. Also, old and retired employees were brought back to the rota for it. “Goa lost a lot of canopy cover owing to extraction of this subgrade ore from mining rejects,” he added.

About 20 million of the 54 million tonnes of iron ore, which was exported came out of these overburdened dumps. Between 2006 and 2012, 1,513.09 ha of forests were diverted according to government records. However there is no figure for the deforestation this illegal mining caused.

“The reason is that the Goa Forest Department does not acknowledge close 50 per cent of the forest outside protected areas.  Goa’s own forest statistics do not match with the data of the Forest Survey of India (FSI),” said Abhijeet Prabhudesai, a member of the Federation of Rainbow Warriors, a citizens’ environmental collective.

Most of Goa’s forests are outside recorded forest areas, according to FSI’s 2017 State of Forest Report. The total forest cover in the state was recorded at 2,229 sq km or 60.21 per cent of the state. But state forest department, in its own records, has only 1,224.46 sq km as government forest and another 200 sq km as private forests which is less than half of what the FSI report claims.

“Only the forests in protected areas were accounted for when the mining scam happened. There is no count on how much forest was cut down in the unrecorded areas,” said Prabhudesai.

Goa Foundation has been fighting to get these uncharted forests into the government records for more than three decades now. Forget about the 1,000 odd hectares of forest that FSI has identified outside government records, the forest department does not even know the plots on which the 200 sq km of recorded private forests lay, said Norma Alvares, a lawyer and founding member of the foundation.

“There were two committees set up by the Goa government between 1997 and 2002 called Sawant and Karapurkar to identify 67 sq km of private forests,” Alvares said. But since then the government has been dragging its feet on identifying the rest of the private forests, Alvares added.

One of the reasons why the Goa government could not find more forest was because how it defined forests. The state government left out all those areas where the tree cover was less than 40 per cent and area less than 5 hectares of contiguous land. This was not in line with FSI’s definition, where tree cover of 10 per cent on one hectare of land would be called a forest.

Since 1997, there have been at least eight committees trying to identify private forests including the most recent one which submitted its report in June 2019. This committee re-identified 46 sq km of private forests that Sawant and Karapurkar had identified. But the state government rejected the report saying prior consent was not taken from the owners whose land was identified.

The reason the government is not interested in identifying private forests is that a lot of land will get locked away under forest protection laws, said a senior forest official in Goa.

“Any landowner who wishes to develop the land with private forests will have to go through all the forest clearance procedures including compensatory afforestation, which may not be possible,” said the official.

But Reboni Saha, secretary of Goa Bachao Abhiyan, counters this by saying that Goa does not have a land ceiling law, and does not limit land ownership. “Most politicians in Goa have bought huge parcels of land hoping to develop if for real estate and tourism, their plans will fail if they are declared as forests,” she said.

Urbanisation has been growing at a breakneck pace in Goa and Saha has been following it for more than two decades now, especially the regional plans. The government's only attempt is to change the land use to allow more commercial activity, she said.

The next round of degradation will take place because of haphazard development. Part of the problem is that the Goa's Town and Country Planning Act has not incorporated the provisions of the 73rd and 74th amendments which allow urban local bodies and panchayats to participate in the planning process.

Goa unveiled its 2021 Regional Plan in 2011. This was supposed to be the blueprint for land use in the state till 2021. But the government has kept this in abeyance soon after it was released.

Instead, the government is trying to frame laws in a piecemeal manner, said Saha. “In 2008, the state first amended the TCP Act, which allows single window clearance for all PPP projects. Then, it arbitrarily allowed commercial establishments to increase their floor area ratio by 20 per cent without looking at roads and fire safety,” said the Goa Bachao Abhiyan secretary.

“In 2014, it started the Investment Promotion Board to fast track development projects,” she added. The common part: all legislation could bypass the zoning in the regional plan.

But the worst was probably the section 16b of the TCPA which was amended in 2018. This allowed anyone to apply for land use change after paying a fee to the Goa government.

For example, only five per cent of orchard land can be built upon and that too limited to ground floor plus one. “But with 16b, anyone could get this changed into settlement and build farmhouses,” she said.

In July 2019, Chandrakant Kavelekar, Goa’s town and country planning minister, told the Assembly that the state had received 5,350 applications for land conversion. Of these, 30 were approved.

Lack of planning could become the biggest degrader of land in Goa, even bigger than mining. The spotlight on mining is intense but small changes in land use pattern go unnoticed, especially for real estate and tourism.

Take the example of Mopa, where the Goa government wants to build an airport.  When the Environmental Impact Assessment for the airport was done it showed no tree cover. But when the court case was filed which lead to enumeration of trees, the forest department found 54,676 trees.

This was after the Union Ministry of Environment, Forest and Climate Change had cleared the project, said Prabhudesai.

Once the airport was announced in the late 1990s many politicians bought land around the airport at prices as cheap as Rs 10-15 per square metre, said Braganca. Most of this area had trees and now there’s severe degradation around it.