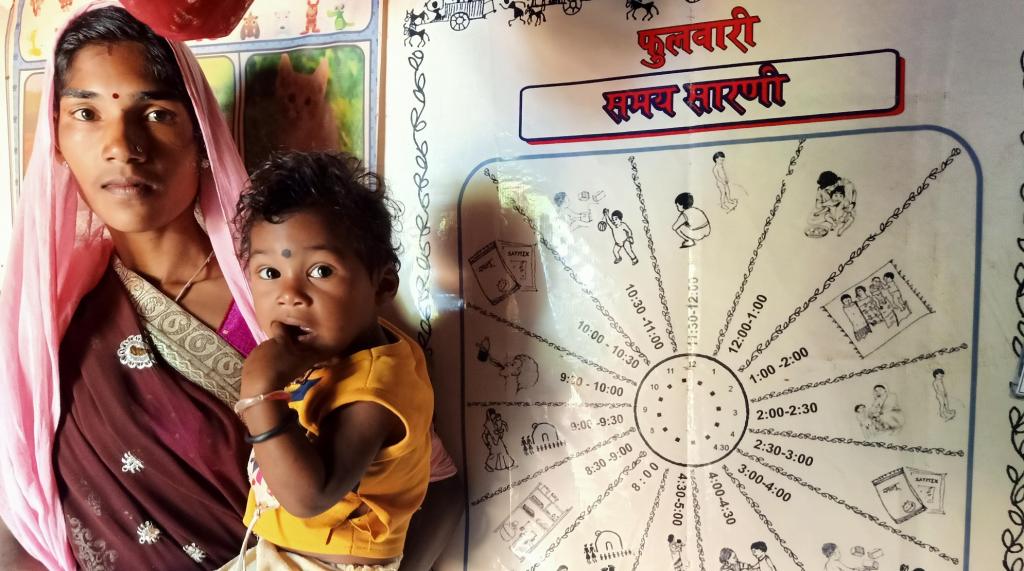 A mother and a child at a 'phulwari' in Anuppur. Photo: Prashanth Chinnapanavar / CSE

*This is the fourth section in a multi-part series

Two key mining districts in the heart of India’s mining belt have opened creches for the children of their inhabitants by using district mineral foundation (DMF) funds, a report by non-profit Centre for Science and Environment (CSE) has found.

Keonjhar in Odisha and Anuppur in Madhya Pradesh (MP) are attempting to target malnutrition among pre-Anganwadi children through local engagement. The initiative is besides the regular Integrated Child Development Services program.

Despite being a high priority area of investment in all states’ DMF Rules, women and child development has been largely neglected. If at all there is any investment, it has stayed confined to construction of Anganwadi centres.

The two initiatives in Keonjhar and Anuppur attempt to go beyond the construction-driven approach, and seek to address a nutrition gap before children go to the Angangwadi Centre.

The first three years of a child’s life are the most formative and crucial for long-term health, an age, which falls through the gaps in the usual nutrition programme focus.

Though conceived independent of each other, both projects have some similarities: They are both being executed through an expert local non-profit that looks at community participation, particularly recruiting local women as creche workers.

The focus is on meeting the dietary requirement of children between 0-3 years.

Keonjhar, the biggest producer of iron ore, has the highest DMF accrual across the country. The district is predominantly rural and has about 45 per cent tribal population.

The nutrition indicators among the children are bleak. National Family health Survey (NFHS) estimates show that about 44 per cent children under five years of age, are stunted and underweight. The under five mortality rate (U5MR) is 70 according to the Annual Health Survey, 2012.

Keonjhar was the first district in India to invest in creches through DMF. In 2018, the district signed an MoU with Ekjut, an organisation with expertise on child nutrition and experience in working in tribal belts of Jharkhand and Odisha, to set up creches.

The creches provide food and nutrition support, etching hygiene habits, early childhood mental stimulation and regular growth monitoring. The food provided in the creche meets about 70 per cent of the child’s nutritional requirement, according to estimates.

After a year-long run with 30 creches, the district doubled the number to spread the creches to the mining-affected areas of Joda, Banspal and Harichandanpur. The total cost for 60 creches is about Rs 2.5 crore per year.

“The idea is also to create a sense of community ownership. Which is why we have constant meetings with local communities and involve them in running the creches as well,” Shibanand Rath of Ekjut, said.

Each creche typically has two care-givers, women selected from the same village. The functioning is closely supervised by the Ekjut monitors and managers. The district collector’s office mandates a monthly report and meetings as required to discuss issues and requirements. 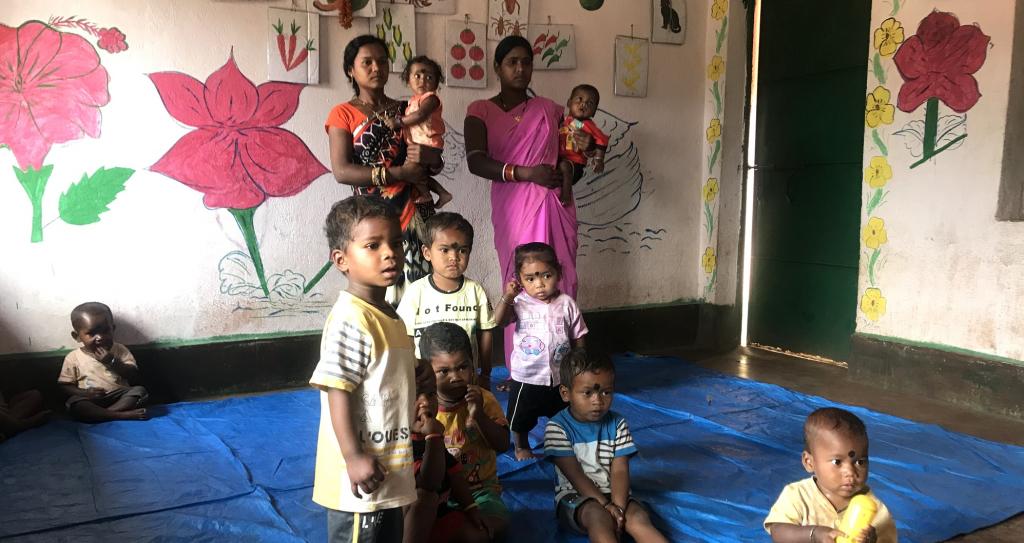 Bringing together DMF and NHM for Phulwaris

MP has been grappling with the worst malnutrition indicators in the country. The situation in Anuppur is no different. About 40 per cent children in the district are underweight, while 33 per cent are stunted.

To address the issue, the district DMF has collaborated with health non-profit, Jan Swasthya Sahyog (JSS) to set up ‘phulwaris’ for children in the 0-3 years age group. JSS has already been assisting the district administration in the implementation of the National Health Mission (NHM).

Anuppur has initiated the phulwaris on a pilot basis in one of its tribal-dominated blocks, Pushparajgarh. In strict terms, Pushparajgarh is not where mines in the district are located.

But given the higher-than-average rate of malnutrition prevalence here and an 80 per cent tribal population, it has been chosen as a starting point of the initiative.

Currently, there are 56 phulwaris, that take care of the nutritional and hygiene requirements of children and monitor their growth closely. The caregivers are women hired from the village itself. Some of the phulawaris, in fact, operate from the homes of the care givers, who have volunteered for it.

The phulwaris are monitored by the JSS supervisors and project monitors. The initiative is a convergence between DMF and NHM.

The DMF funds provide all the functional cost of phulwaris (just about Rs 1 lakh annually). The salary of the supervisors and project coordinators come from NHM. JSS offers the technical support to run the phulwaris for no management fee.

Chameli Devi, a mother of an 18-month old girl feels relieved that she can leave her daughter and go to the fields to work without worrying about the food and care. The local self-help-groups (SHGs) are planning more outreach in the village to rope in more children.

“The health benefits for children are visible and more parents need to understand the merit of it,” said Savita Singh, a local SHG member.

Both districts are now also working on monitoring the nutritional gains made by the children in cheches and phulwaris as evidence for the intervention.