How will India address illegal sand mining without any data?

New laws to regulate sand mining have not had much impact 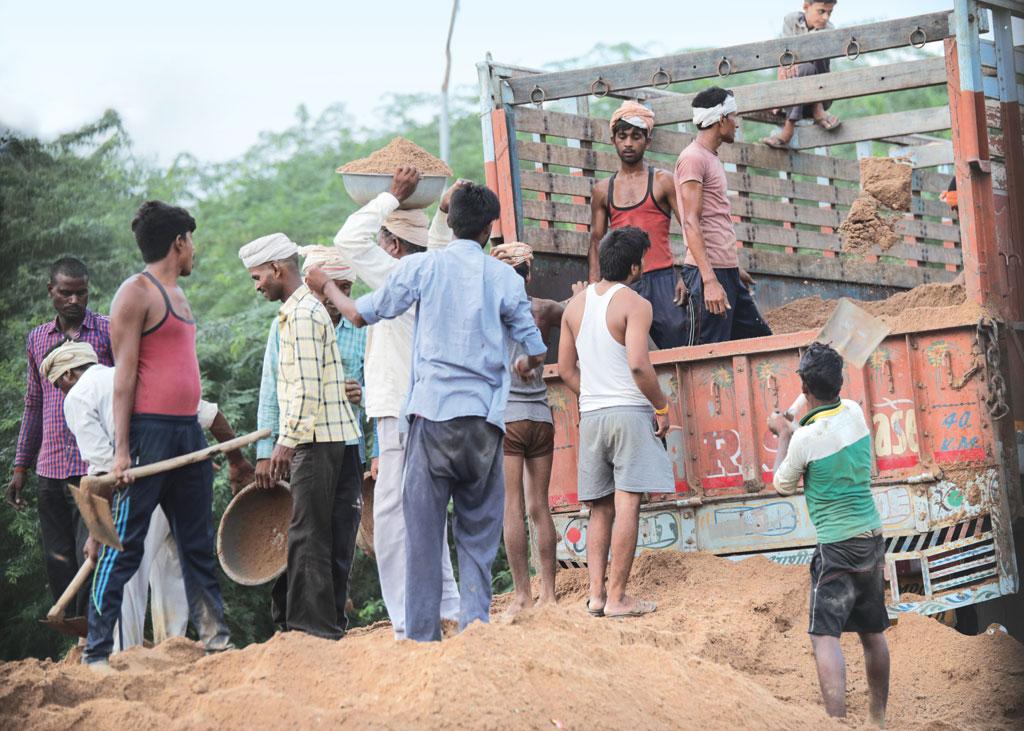 Illegal sand mining is a perennial problem in India. But it assumes gargantuan proportions right before the onset of monsoon because swollen rivers make extraction extremely difficult during the rainy season. To make most of the lean period, mine owners and hoarders try to dig out as much sand as possible, through legal and illegal means, in the pre-monsoon months.

This happened this year too, and was evident from the surge in cases reported in the media. In May, the newly elected Congress government in Punjab found itself in the middle of a multi-crore rupee sand mining scam. Punjab’s power and irrigation minister, Rana Gurjit Singh, was alleged to have granted mining leases to his acquaintances, including his former cook, Amit Bahadur.

There are no official figures for the amount of sand mined illegally. But in 2015-16, there were over 19,000 cases of illegal mining of minor minerals, which include sand, in the country, said Piyush Goyal, former minister of mines, while answering a question in the Lok Sabha in February (see ‘Countrywide malaise’ on p18). How many of these cases were related to sand mining is not recorded, but sand is the fourth most mined minor mineral, says the Indian Bureau of Mines.

Under the Mines and Minerals (Development and Regulation) Act, 1957, mining of minor minerals is regulated by the states. In 2012, hearing a public interest petition filed by Haryana-based advocate Deepak Kumar, the Supreme Court acknowledged the dangers of small-scale sand mining (spread over less than 5 hectares), which leads to extensive and unsustainable removal of sand from river banks. Drawing from the order, the Union Ministry of Environment, Forest and Climate Change (MoEFCC), issued Sustainable Sand Mining Management Guidelines in March 2016. Same year, in May, it amended the Environment Impact Assessment (EIA) Notification 2006 to make environmental impact clearance mandatory for small-scale sand mines. The notification also called for treating cluster mines (those within 500 m of each other) as a single mine and provided for the creation of two bodies—a District-level Expert Appraisal Committee (DEAC) to assess the environmental impact of mines and a District Environment Impact Assessment Authority (DEIAA), under the district collector, to prepare a District Survey Report for tabulating sand mining potential of the district and for granting clearances.

“Though it has been more than a year since the amendment was made, and most states have constituted the district-level bodies, nobody cares about illegal mining of sand and the norms are openly flouted,” says Biren Nayak, programme manager of ActionAid, an international non-profit that works on issues related to poverty and social justice. 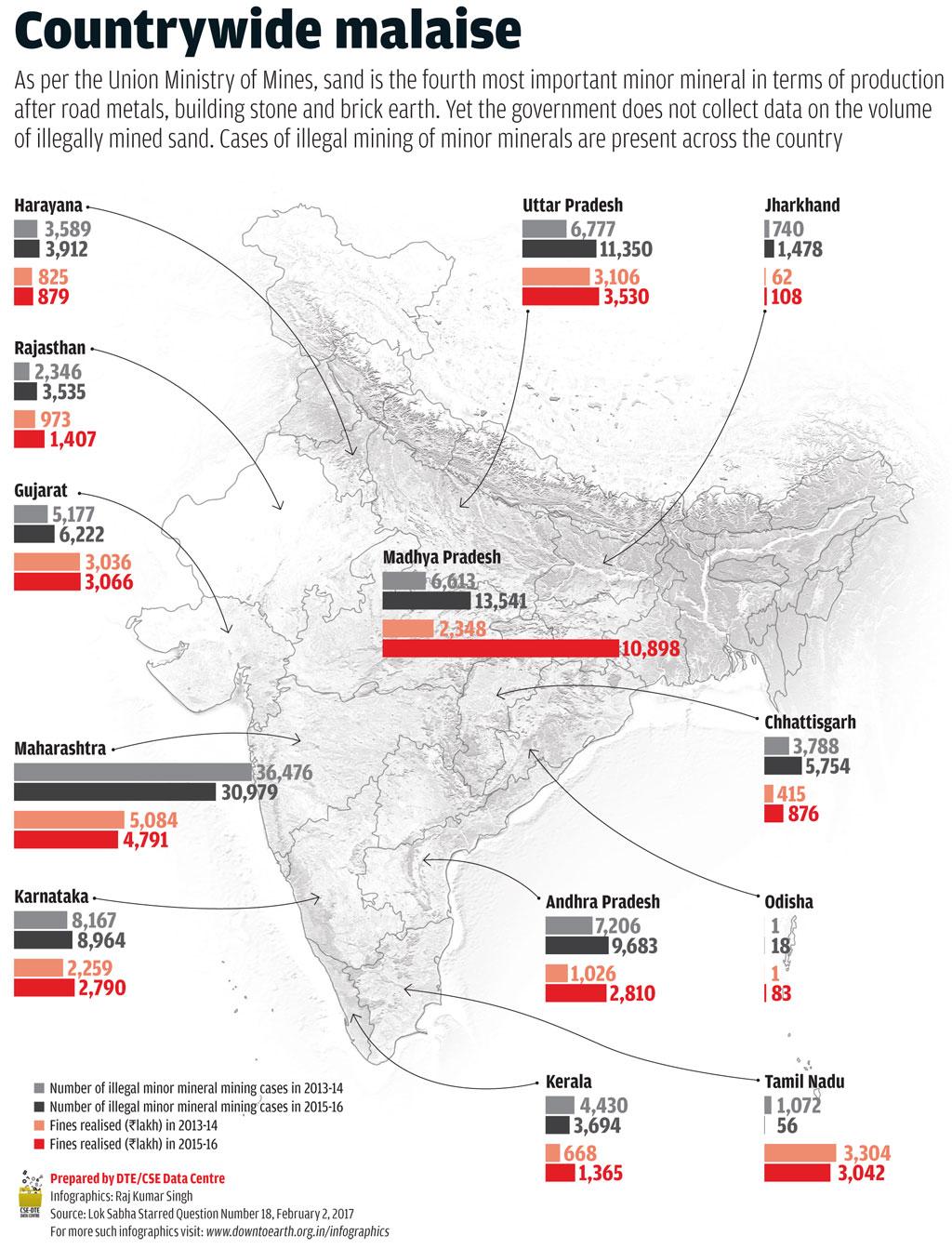 There are several examples that substantiate Nayak’s point. At the office of the District Mining Officer (DMO) of Bhind, one of Madhya Pradesh’s key mining centres, this reporter met Rahul Tomar and Lucky Rajant whose trucks had been seized for carrying illegal sand. The two took this reporter to the site on the river Sindh where they illegally extract sand. The site is barely 25 km for the DMO office. They also showed the two legal mines at Bikarampura and Rohera in the neighbouring district of Datiya. The Environment Impact Assessment Notification calls for “one public consultation” to allow people to raise objections before preparation of “the final Environment Impact Assessment or Environment Management Plan report”. But for the two legal mines, there was no consultation, they said. “On the other hand, they have seized our trucks, though we pay bribes regularly,” they say. Bhind is yet to even prepare its District Survey Report.

The situation in Etawah, a key collection and distribution centre in Uttar Pradesh, where sand transported from the neighbouring state of Madhya Pradesh is sold, is a little more complicated. In pursuance of the 2016 guidelines, the Uttar Pradesh government banned sand mining across the state for July, August and September through an order passed on March 19. But in May, it issued 200 leases to allow mining in all districts, including Etawah, for six months. To muddle matters further, mining at all the three sand mines in Etawah is suspended due to a court case pending since 2015. Manish Yadav, DMO of Etawah, said that the eauction of mines will start again in September.

The result is that there is no mining and there is an acute shortage of sand. “Earlier, the sand was sold for around Rs 5,000 per 10 cubic feet (1 cubic feet equals 0.3 cubic metres), now it’s Rs 10,000. How can I complete the construction process,” complains Sharad Shukla of Etawah, who had to stop construction of his house after the price of sand rose by 100 per cent.

Sand requirement of Etawah and surrounding areas are being met by sand transported from the neighbouring states. “Every day, some 1,000 trucks carrying sand pass through this road. Many are overloaded,” says Prabhat Pandey, additional road transport officer, Kanpur region, standing at a check post in Udai, the village where Etawah’s sand market is located. The post was set up in June to check trucks coming from Madhya Pradesh. “Since June, over 530 cubic metres of sand (enough to fill over 800 trucks) has been confiscated,” informs Pandey. 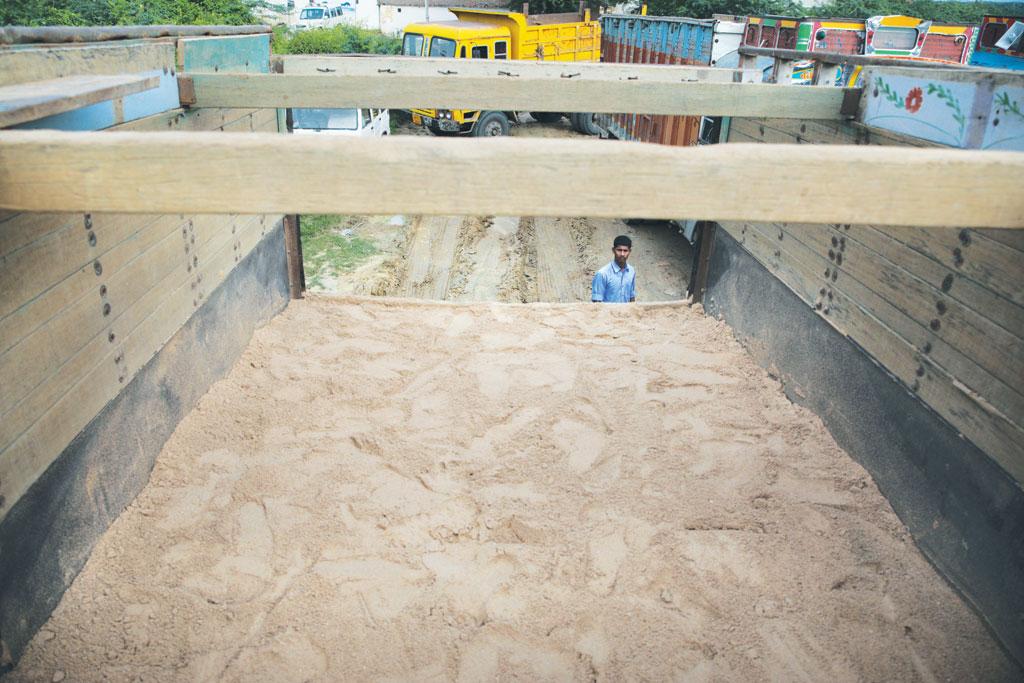 Another district where mining laws are being openly flouted is Dhaulpur in Rajasthan. The entire Chambal river was declared a protected gharial sanctuary in 1979 and no mining is allowed along the banks of the river. But huge mounds of recently excavated sand can be seen along the banks of the river in Dhaulpur. “Some of the best nesting sites—where the female lays eggs—have been ruined due to illegal sand mining,” says Jyoti Badkotiya, in-charge of Deori Rearing Centre for Gharial, an artificial hatchery for the critically endangered reptile in Morena district, Madhya Pradesh. But the Dhaulpur Forest Department Range Officer, Atar Singh, denies any illegal sand mining. “The sand mounds are from the time when the Chambal had not been declared a sanctuary,” he claims.

The EIA notification also talks about monitoring the “route of vehicle from source to destination” through a system using “checkpoints, RFID tags [Radio-frequency identification], and GPS tracking”. None of these checks were present in the mining sites visited by Down To Earth in Etawah, Bhind and Dhaulpur.

Shortage of human resources is another issue. DEAC consists of 11 experts, including the district magistrate/collector and sub-divisional magistrate, who have to look at the sustainability of sand mines. In Bhind there are 57 sand mining spots. For 11 members, who have other primary responsibilities, going to every mine can be quite difficult.

In a rapidly urbanising India, the demand of sand will only rise because sand is the main ingredient in making concrete and cement. Though the construction sector has only witnessed a 1.7 per cent growth this year, government schemes, like Swachh Bharat Mission and Housing for All by 2022, are likely to cause a resurgence. The demand for sand in India will be 1,430 million tonnes by 2020, estimates a 2013 report by the Freedonia Group, a US-based industry market research company. But worryingly, the production of sand has been going down for the past five years. According to the Indian Minerals Yearbook 2015, published by the Indian Bureau of Mines, sand production in 2014-15 was 2.1 million tonnes. 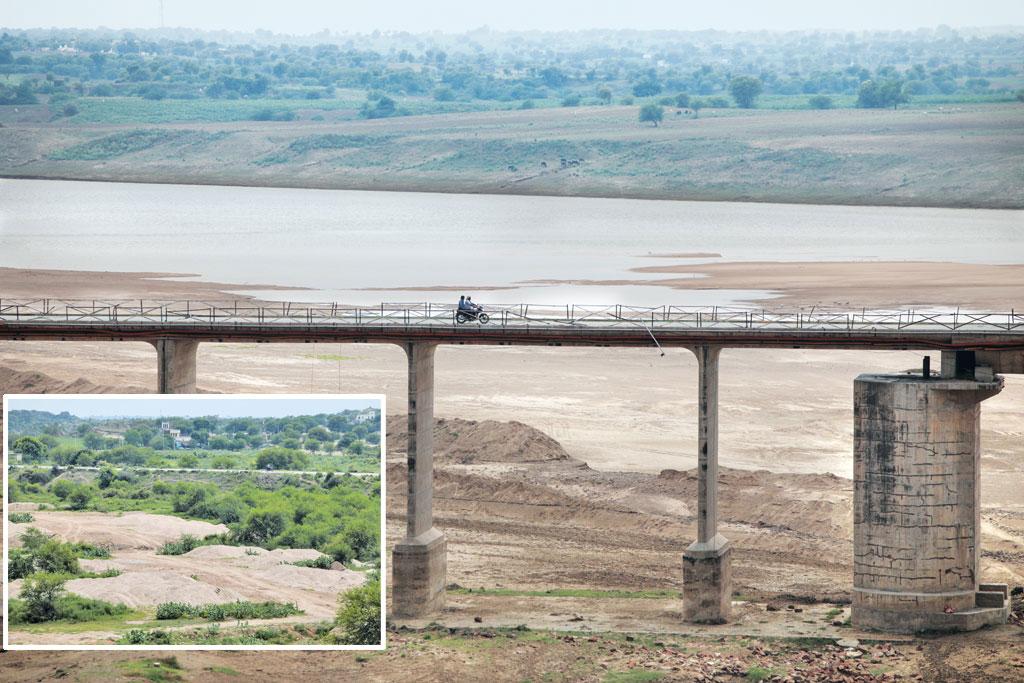 “Shortage of sand could further spike illegal mining activities,” says an Etawah-based mine contractor, requesting anonymity. “One truck of legally procured sand sells for Rs 30,000-40,000, at 50 per cent profit. The profit margin more than doubles if the sand is procured illegally,” he says, unabashedly claiming that his father made huge profits two years ago by selling illegally extracted sand from Etawah.

So what can be done? Sujit Kumar Singh, senior programme manager, environment and social assessment team of Delhi-based non-profit Centre for Science and Environment, says, “Sustainable sand extraction is possible only if we know the regeneration rate of sand in a river and issue leases based on that data.” While this data is required to be included in the District Survey Reports, as most district are not preparing them, the measure is rendered useless.

“State governments must find a way to enforce the new norms,” says Vipul Sharma of the International Union for Conservation of Nature (IUCN). “To maintain the ecology of a river, it is important to give compact leases, in small areas. This will ensure that the river hydrology does not change,” he adds.